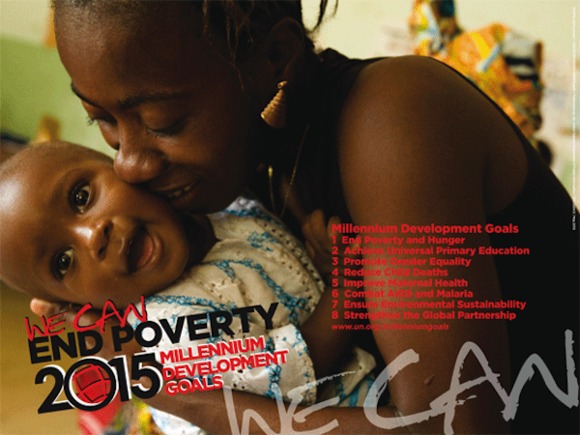 Fourteen years ago a global commitment was made to reach eight goals , known as the Millennium Development Goals or MDGs, addressing the needs of the world's poorest. Today, we're just around the corner from our target date. How far have we come? What progress has been made and in what areas are we falling short?

Although millions of lives have improved due to the MDGs, gaps remain and results are mixed across the board. In September 2013, two events were held to discuss progress and plans for moving forward. The first event was a high-level forum held by the Secretary-General on how we can accelerate our global efforts. The second was a special occasion hosted by the President of the UN General Assembly. In his report, UN Secretary-General Ban Ki-moon highlighted  some progress, holes, and larger issues influencing efforts, and the urgency of a renewed commitment to the MDGs, as well as a "post-2015 development agenda."

-  Globally, the number of those living in extreme poverty has halved.

-  The drinking water target was met five years ahead of the 2015 target date with over 2 billion people gaining access to improved drinking water sources.

-  Gains have been made in the fight against malaria and tuberculosis.

-  The proportion of slum dwellers in cities and metropolises in the developing world are declining.

-  Hunger reduction is a target within reach as the proportion of undernourished people in developing regions decreased from 23.2% to 14.9% since the early 1990's.

Areas in need of improvement:

-  Despite gains in decreasing the child mortality rate and maternal deaths, the current number of deaths is still alarming. Acceleration on these goals will be needed in order to reach the target reductions of two-thirds and three-quarters respectively.

-  Knowledge of HIV and how to avoid transmission remains remarkably low.

-  Although the number of children out of school was reduced by half, progress has slowed and stalled over time.

-  African countries and least developed countries continue to fall behind in progress on goals.

-  Climate change is still a major threat to progress as carbon dioxide emissions are more than 46% higher than they were in 1990. This makes natural resources more limited in supply and animals reaching extinction at a faster rate.

-  Disproportions in progress remain. For example, poor and rural areas are more likely to lag in progress. Gender-based inequalities on both macro and micro levels leave women with denied opportunities to make decisions.

-  Additionally, there has been a decline in aid to developing countries over time.

So, where do we stand? The answer is together. The data collected shows that we can make a difference however, we will need to increase momentum, understand what is working (and what is not), and implement an intentional post-2015 plan that both sustains progress and addresses disparities.