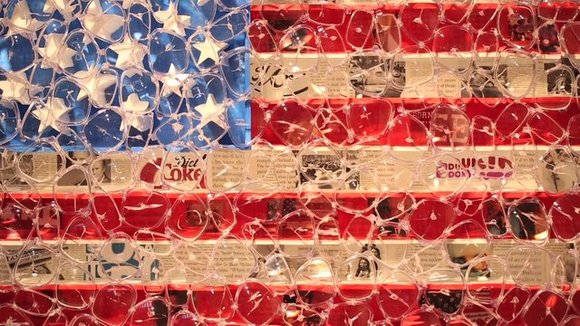 Every third monday of February, the United States celebrates President’s Day, also known as George Washington’s birthday. This year David Datuna, a multimedia artist, took the celebration a step further from school holidays, a chance to educate on past and present Presidents, and sales for numerous companies. He created “Portraits of America,” a 12-foot multimedia American flag that captivates the viewer with the usage of cameras embedded in the artwork and Google Glass. This takes human interaction within art and politics to the next level, as Dutana spotlights an iconic item and forces viewers to look more closely to see different stories underneath the surface. The piece is part of his body of work “Viewpoint of Billions."

Dutana’s use of Google Glass reflects the evolving audience in a gallery and in the general public, allowing viewers to interact with one another, no matter when they are present in front of the work. This encourages thought-provoking questions. Imagine asking any questions such as, “why is it important to learn from our past,” then taking your experience and relating that to someone outside of the exhibit. These questions can trigger a positive butterfly effect and actively involve Americans to celebrate this patriotic day.

However, until that butterfly effect reaches you, here are a few tools that can be used in celebration of President’s Day. The American Presidents: Unofficial Oval Office Scrapbook is for young American historian enthusiasts and educates children through quirky, presidential facts. Political activists have a resourceful tool called PolitiCall, which features updated contact information of elected representatives. For gamers and future politicians, the app Election Game 2012 creates an experience that helps users envision themselves as a presidential candidates and manage their campaigns.

When you stand in front of the American flag and pause to think what lies beneath the figurative surface, what question comes to your mind?