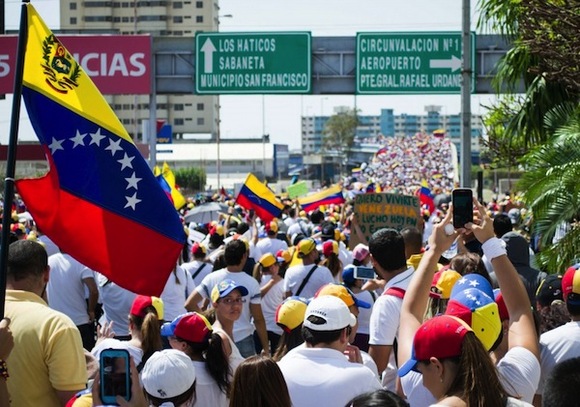 Venezuela is a beautiful country that has recently been home to public protests at the rise in violent crime, downward spiral of the economy, and opposition to the socialist government. While President Nicolas Maduro has supporters and opposers, both parties are taking it to the streets. The opposition’s mantra is “he who tires, loses.” The protestors are demanding change, and they're not tiring.

Henrique Capriles, an opposition leader, said that Maduro is “an error in the history of the country.” Since the protests have begun, there have been a reported number of 13 deaths and 147 injured. Both parties are blaming each other for the cause and perpetuation of the violent atrocities.

But there is hope amid the chaos. In 2011, the Arab Spring was on every social media website before it reached the news. With emerging technology and digital tools available to citizens across the globe, political unrest doesn't need to go unheard.

In Venezuela, Zello, an app for sending short voice messages, has been blocked along with other apps and websites. However, they have changed the coding for Android devices to give the device another IP address making it harder to block. Here at The Toolbox, we have a few more tools to recommend to people in Venezuela and around the world.

The tool CrowdVoice tracks and displays worldwide protests through eyewitness account, and utilizes videos uploaded on YouTube and other sites. Below are different clips of the Venezuelan protests.

For people losing connectivity, Qual.net provides a solution for areas that are in a communication blackout by generating free wi-fi without the use of cellular or internet networks.

It goes without saying that many protesters in Venezuela are getting arrested. The tool, I’m Getting Arrested, is a one-click button app that allows users to inform their family and friends their location of arrest.

During these national protests, not keeping your identity secret can be detrimental to your safety. ObscuraCam allows you to protect the identity of those captured in photos and videos before you begin to share.

On a more personal note, a friend of mine from Venezuela is currently living away from home and shared her views on the protests with me.

"I have mixed emotions," she said. "I hate how the government is treating people, but I love the fact that the people have woken up and are fighting for their freedom. My family and childhood friends are there so I'm constantly getting updates about it from a real-life perspective and it's scary. Scary and sad."

We hope the voices in Venezuela are being heard, and the tools needed to help them are being used by the masses.