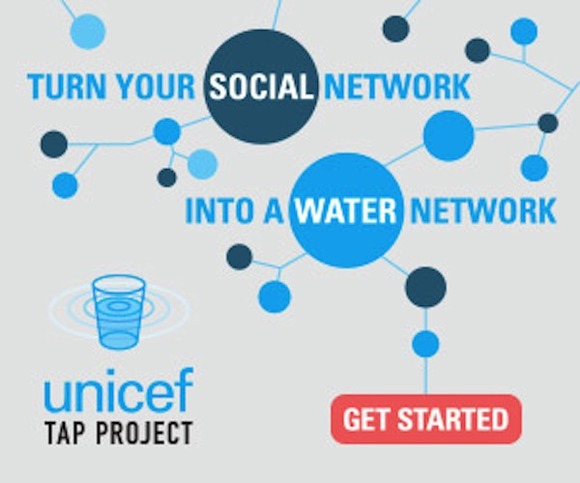 Every day, 1,400 children under five die from diarrheal diseases linked to water, sanitation and hygiene. The UNICEF Tap Project is a campaign designed to combat the problem by driving awareness and raking in donations to UNICEF’s global water and sanitation programs for children.

The Project launched in New York City in 2007 with a simple call to action. During World Water Week (the end of March), restaurants across the United States encouraged patrons to donate $1 or more for the tap water they usually enjoy for free with donations supporting UNICEF’s water and sanitation programs.

This year with the release of a new mobile web app, UNICEF is making it easier than ever for people to support the Tap Project. We caught up with the UNICEF team to learn more.

What went into designing and creating a mobile app?

Advertising agency Droga5 is our founding partner for the UNICEF Tap Project, and we worked closely with them to create this year’s concept. Every year we ask ourselves the same question, “Why should people care about access to clean water?”

Clean water is something most of us in the U.S. take for granted, and it’s hard to put ourselves in the shoes of a child halfway across the globe for whom safe drinking water is a luxury.

We wanted to put things into perspective and allow people to reflect on the issue of clean water and their own realities at the same time.

How does the app work?

For every ten minutes spent on the UNICEF Tap Project mobile experience, Giorgio Armani Fragrances and other donors will provide the funding equivalent of one day of clean water for a child. Once the cell phone is touched after activating the mobile web app, the site calculates the time spent and impact of the effort.

Throughout the process, the app also provides facts about water access and record times set by other users in the same state. Through the site tap.unicefusa.org, individuals can also donate or sign up as volunteers to support UNICEF’s clean water and sanitation programs for children.

What's the desired impact of the mobile app? Have you seen results?

We’re thrilled that this year’s campaign has taken off. So far, the mobile experience has been activated 3.5 million times, people have stayed off their phones for over 200 million minutes to provide clean water to children, and more than 14,000 people have signed up as volunteers with us. We’ve been blown away by how much interest and enthusiasm this year’s campaign has generated. Our aim was to meet or exceed last year’s goal of $1 million, and we’re on track to do that.