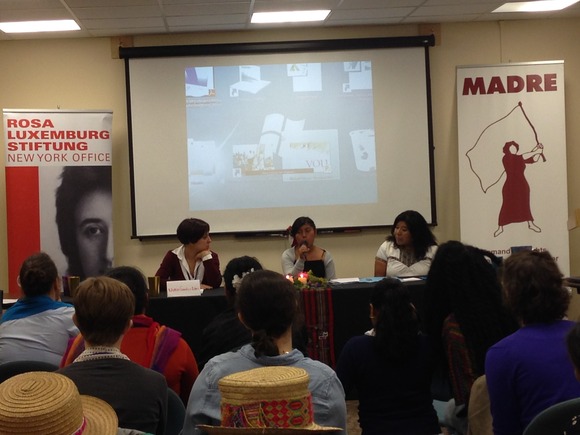 On May 15th, MADRE and Rosa Luxemburg-Stiftung NYC hosted a Tribunal of Conscience of Indigenous Women at the 13th UN Permanent Forum on Indigenous Issues (UNPFII), which makes recommendations to the UN’s Economic and Social Council for the sake of combatting violence against women. During the event, indigenous activists and victim alliances from Mexico and Central America presented their cases. The women explained that in spite of the femicide, bullying, and discrimination that continues in small towns and cities, coming together in a tribunal to discuss evidence of abuse against women has proven to be a form of recuperation and peace in their society.

Many of the stories were heartbreaking and called out for better community organization and collaboration with authorities to use evidence and local human resources to complement systems and laws. In Nicaragua, Claudia Vargas, a Wáspan woman who is a part of the alliance of Mexican and Central American Women, explained that in her region there is no electricity or access to emergency medical attention, and there is tremendous unemployment and poverty. Her compañera shared in her native tongue the story of a 7-year-old girl who was taken from her town and sexually abused. The girl needed immediate attention, but because there weren’t advisors, doctors, ambulance, or a general system in place for emergencies, the ‘Law 179’  aimed to protect the youth, was of no use. Vargas recommended adding the missing roles to cultivate a better system.

A strong presentation came from Guatemala, highlighting the events of May of 2010, when  Guatemalan women held a tribunal of conscience regarding acts of sexual violence during the country’s 36-year armed conflict. It was the first time the Court of Conscience took place in Guatemala City and opened avenues for women’s rights to justice, as indigenous women came forward and gave testimonies. Rosalina Tuyuc spoke of how the tribunal of conscience continues to denounce the different forms of violence women face today—economic, social and familial. She reminded the tribunal that citizens should condemn this violence even if the state does not.

Another spokeswoman from Mexico explained that femicide continues to be denied, even though there's evidence of it taking place, including the disappearance of journalists. In “País Vasco in 2013, ” the Tribunal of Women’s Rights used demonstrations, experts, and testimonials to get the jury to issue their resolution. But in Mexico City, there continues to be many examples of bullying and discrimination toward youth, especially young women. During her testimony, a young woman from Guerreo, México asked, "Donde están las autoridades que me deben proteger? Me discriminen."

“Where are the authorities that should protect me? I face discrimination.”

Overall, today's tribunal provided examples of how people can come together and use legal processes in regions where there is abuse of indigenous women and young children. Their experiences remind us that there is hope as long as there is a way to gather evidence that complements legal systems designed to instill peace and justice.