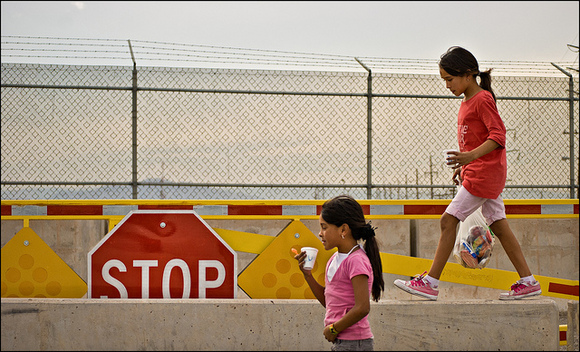 I recently came across a video in a Fusion article titled “Crossing the Border in the Age of the Selfie,” which tells the story of a 25-year-old woman from Mexico sharing her struggles of trekking through the desert to reach the U.S. border in a heartbreaking Facebook video. Months later, after making it into the States on her seventh try she declared, “It’s not a crime to try and get ahead.”

Fusion also posted Immigration? There’s an App for That, listing tools related to immigration. I wanted to see how tech is being used in this day and “age of the selfie” to help people seek a better life, so I asked the app creators for case studies and statistics on users. I found that none of the developers I interviewed linked their tools to helping an undocumented person crossing the border. A number of the immigration tools were created for border crossing convenience, while one was built to protect civil rights unlinked to immigration, and another provides information about campaigns for minimizing illegal immigration.

Immigration app creator, Ganz Chockalingam of San Diego, built the Best Time to Cross the Border app with Calit2-UCSD to improve what he calls the “worst border crossing in the world.” He experienced this firsthand on multiple occasions when it took him 3-5 hours to cross. Chockalingam wanted to know if there was a way to detect the best time to come back into California, and found border protection data somewhat inaccurate and updated only hourly. For two and a half years, he collected wait times to improve those statistics. The app now features a crowd-sourced approach to queue management and time estimation, collecting user data that helps improve existing data, and graphs that show which days and hours are best for crossing the border.

According to a study done by the San Diego Association of Governments in 2007, border traffic delays cost the economies of the U.S. and Mexico more than $7.2 billion and 83,000 jobs annually. Chockalingam says over 100,000 commuters use his app, with 30,000-40,000 users in the Baja and Cabo region alone. When asked for a user example, Chockalingam shared the story of a Mexican woman with three kids who wakes up at 3:00 a.m., and checks the wait border time on the app to plan her commute to her job in the U.S. Depending on the situation, she decides if she can sleep a half hour more. Her commute is 4-5 hours each way.

In the next month, Chockalingam and his team hope to make the app a “commuter social network” where those crossing at the same port could share information on lanes, roads leading up to the terminal, and even food or fuel resources along the way. This would make the “Best Time to Cross the Border” the first app of its kind to include commuters’ input.

A similar tool, Border Wait Times, created by Delio Castillo, helps people making border crossing plans by using the Customs and Border Protection site. Castillo says users can trust the app’s data because “it is being reported by the officials who run the border.” However, I have heard from other creators who have investigated the CBP data, and said the site’s statistics are not the most accurate, as the CBP doesn’t want to make the borders look too porous, too easy to cross, or too packed. One Border Wait Times user, Doug Sullivan, claims the app’s layout makes it much easier to check delays than the CPB webpage.

For two year, Castillo has been archiving border crossing data, which he plans to use in future programs to determine historically the best times to cross on a particular day. He also said he created the app for routine commuters as a convenience tool, mainly for US workers living in Mexico who don’t have a choice on when they cross the border.

The Immigration News and Activism app created by Numbers USA shows another angle, focusing on “minimizing illegal immigration and maximizing openness to visitors.” Numbers USA operates at the center of the most influential anti-immigrant network in the country. The app supports immigration enforcement amendments like this.

The Director of Technology at Numbers USA, Solomon S. Gifford, strategically avoids nationalist rhetoric by introducing the argument that structural problems must be addressed from the countries people are migrating from, in order to solve the plight of billions of poor people around the globe.

Gifford says, “Instead of using technology to support more migration so that a very few people can find a better life here and many times take jobs and benefits from vulnerable Americans, we would rather support exporting our knowledge, skill, education, etc., in order to increase the quality of life of all the citizens of the sending countries.”

While it is true that economic change must be sustainable, as seen in this problematic “Immigration, World Poverty and gumball video”, created by Numbers USA, Gifford explains that the privileged are the ones that make it to immigrate, leaving billions behind. But it’s not just the privileged who are migrating on foot from Central America and Mexico, experiencing violence, theft and discrimination. It’s also everyday people and individuals living in poverty, who are trying to make a better life for themselves.

Immigration isn't going away. Therefore, we need more stories of the struggles and stark realities of people who have migrated or tried to migrate to the U.S. While there are tools focused on good times to cross the border and other immigration information, there are no apps sharing the stories about the people themselves, documented or otherwise. How do you think we can change this?