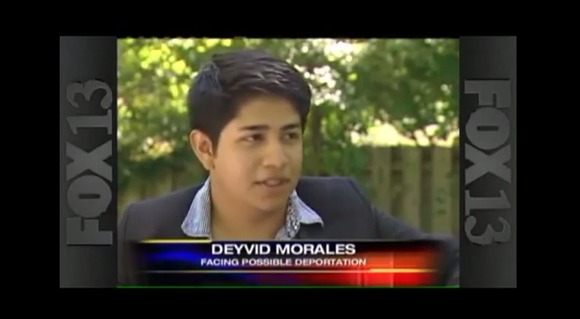 In light of the unprecedented surge of unaccompanied minors from Central America and Mexico, immigration reform is as controversial a topic as ever. U.S. authorities estimate that 60,000 children who do not have access to legal advice are likely to be deported. Immigration advocates argue that if children are able to obtain citizenship they will be able to return to their countries, reducing the unprecedented influx of youth from the South and ultimately saving lives.

Have you ever wanted to change the lives of thousands so they wouldn’t have to experience the fear that comes with racial discrimination and the possibility of deportation? Activist and minister Deyvid Morales does, and the vehicle for his mission is “Derechos Herencia,” an app designed to help Latino undocumented immigrants know their rights and find a path to citizenship at the touch of their fingertips and in the moments when they need it most.

As is the story with many undocumented youth, Morales came to the U.S. at a young age. “I came here when I was eight, but don’t know how [I was immigrated],” he told Border Patrol the first time he was detained while traveling from California to attend college in Indiana. When his Greyhound bus was stopped by Border Patrol, Morales was arrested for not having proof citizenship. Border Patrol tried to deport him that night, but instead Morales spent 17 days in immigration jail in Louisiana with a bail set at $10,000. He was later sent home and put on the ISAP (Intensive Supervision Appearance Program) for 15 months, and could only go out three days of the week.

When he was released, Morales took to activism to take a stand against Utah’s HB 497 anti-immigration law, similar to SB 1070 in Arizona. He was again detained and placed under supervision. In a correction center full of immigrants, he met others with similar stories -- people who had landed there after going to see their families or trying to take a vacation.

Morales decided he wanted to know more about Border Patrol and Greyhound encounters after his supervision.  So he got on another bus, which sure enough was stopped. But this time he knew his rights. He told others on the bus they only had to say their first and last name, and that’s what they did. When the Border Patrol agents got on the bus, he was still speaking, and they detained him for nine hours. “Why can’t I be there telling people their rights?” he thought, “What can I do instead of being on every bus?”

Morales decided there should be an app for that and found developers in Seattle who understood his vision. His “Derechos Herencia app,” which launched this year, sends push notifications with updates on immigrant news to users and provides answers for questions such as, “What can I do if I’m detained by the police?” The app also provides visa information for different cases. It has even featured a radio show that streamed twice a week. After Derechos Herencia launched, Morales saw an immediate outpouring of deportation stories from people who wanted advice. While he's unable to give legal counsel, Morales provides as much information and resources as possible based on a user’s location.

“I can’t change immigration reform but I can inform people of their rights,” Morales says. “I’m glad it happened to me so I can help people and not just sit and complain about [the realities].”