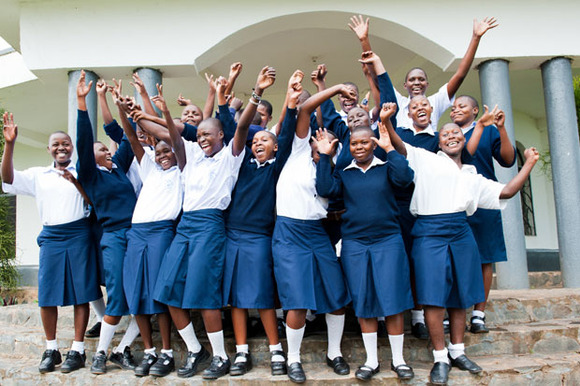 This article was originally published in Marie Claire.

Six years after paying her own way to obtain her college degree, Liz Bohannon is responsible for financing the college education of 47 Ugandan women. Her ethical fashion brand Sseko Designs recruits high-potential young women from backgrounds of extreme poverty to work for nine months -- the time between the end of secondary school and start of college classes -- to make beautiful leather sandals with interchangeable fabrics.

The money these women make and save is matched 100 percent by Sseko to pay for their tuition, and all of the women who have been through Sseko's university-bound program have either graduated or are still on-track in their college classes.

Bohannon is part of an incredible rising group of entrepreneurs in The Purpose Economy, a term coined by author Aaron Hurst as a time where desire for impact shapes the way we think about businesses. Perhaps even more inspiring than starting a business and reinvesting profits for social good is identifying a problem then later brainstorming a business idea to help fund the solution. In other words, the business part of the company isn't formed until long after the mission is identified. The mission -- whether it's putting an end to poverty, homelessness, human trafficking -- is what fuels the entrepreneurs to start their businesses.

There's evidence showing that women entrepreneurs are more likely to reinvest their profit for the good of their communities and are also at the forefront of the move in starting mission-inspired businesses. Chile's president Michelle Bachelet says that it's because "women are natural social entrepreneurs."

Bohannon's mission began in 2008 when she quit her job at global communications firm Fleishman-Hillard after two months, bought a one-way ticket to Uganda, and found herself working with a youth development organization to recruit young women who showed tremendous potential, but come from poor economic backgrounds.

It was through working, befriending, and being inspired by these women that Bohannon realized that while they tested in the top percentile of their class, most of these women would never continue their education. They will never go to college because they'd never be able to come up with tuition that the universities in Uganda expect upfront (no student loans or scholarships). They'll never go because they're expected to marry and have babies in exchange for the dowries paid years in advance for their unions.

Whatever reasons prevented them from furthering their education, Bohannon knew she wanted to be a part of the solution. "Out of everything that I experienced in Uganda, this was the craziest," she says. "Here were 25 of the brightest women in the country that I truly believed could go on to be leaders. The fact that they are going to go back to their villages and not continue their education and not be able to go on to become what they dream about becoming is totally messed up." To end this cycle, Bohannon first started a chicken farm hoping to employ the women. It failed. Next, she decided to make sandals because her friend from home suggested it. 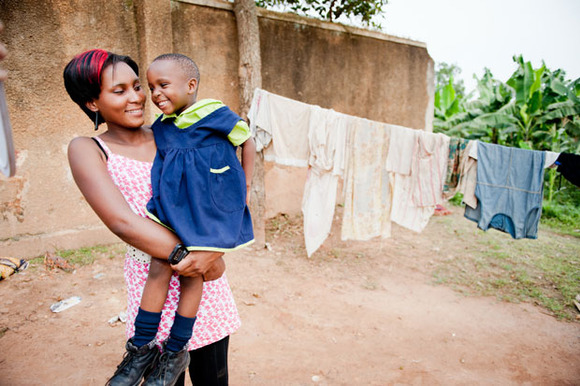 After making several pairs of sandals, Bohannon went to a school and recruited three women. In the summer of 2008, those three women made 900 pairs of sandals, which Bohannon took back to the states with her in four suitcases and sold them all out of the trunk of her car. The three women -- Mary, Mercy, and Rebecca -- made it to college the following August. 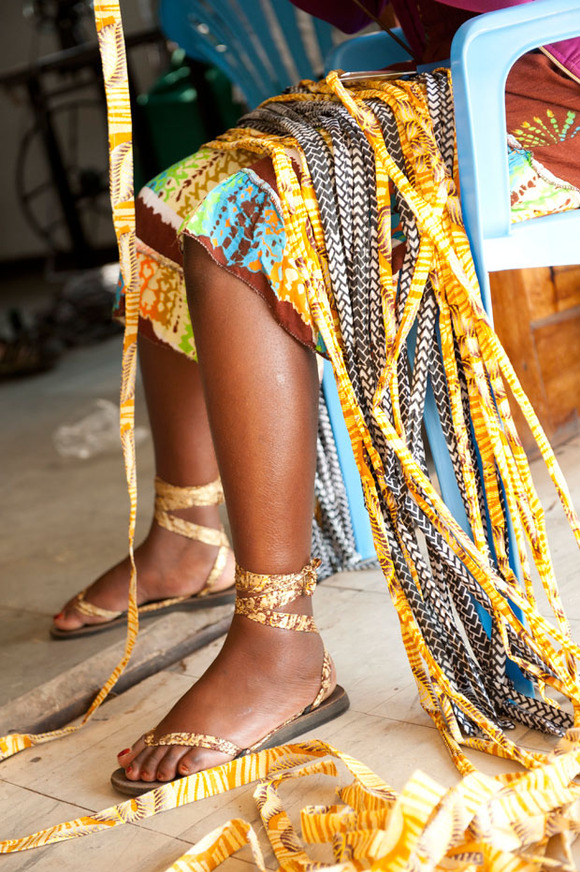 Bohannon returned to Uganda and kept doing what she was doing and in 2009, her sandals were included in Martha Stewart's Holiday Gift Giving Guide, and Sseko Designs officially launched. Bohannon has all the faith that these ambitious young women will go on to become leaders in Uganda.

Gwendolyn Floyd is another example of a mission-inspired entrepreneur. While traveling around the world a few years back, Floyd was working as a consultant exploring what technology could do for social change. In India, China, North Africa, Cuba, and the Middle East, she witnessed women who were making incredible goods, but were unable to get paid for their work because of issues in the supply chain. "Even in the middle class in these countries, credit cards, Paypal is very expensive for transfers," says Floyd. But she realized that with mobile phones, these women artisan could receive their profit in the form of mobile money, which they could then withdraw at any of the kiosks quickly expanding in the slums in Africa.

In 2011, Floyd along with her co-founders Ella Peinovich and Catherine Mahugu launched e-commerce platform Soko. "We were able to cut out the middle man and create a peer-to-peer direct trade, turning profit into mobile money," she says. "It's a way to get the money into the hands of women and when women have money, they get their kids in schools. It's a ripple effect."

To partner with Soko, the women artisans apply and once accepted, will receive a small microloan to get a smartphone which they will then use to sell and accept payment for their goods. The company currently employs 700 women. 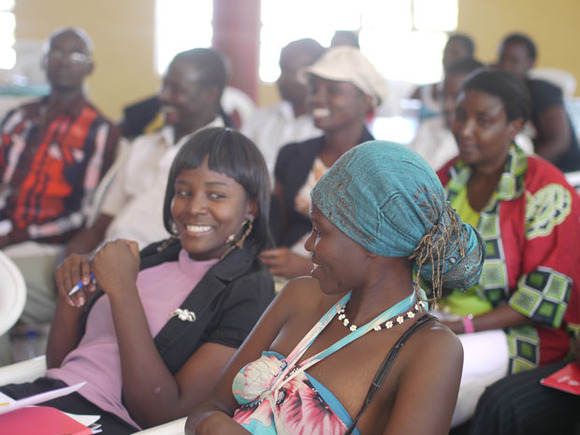 But these mission-inspired companies aren't just happening overseas in destitute countries. They're starting in our own neighborhoods all over the country.

In the revitalizing city of Detroit, jewelry company Rebel Nell has a dual mission: To help rebuild the city by using graffiti fallen off the numerous decaying buildings to make jewelry and to get women out of shelters. 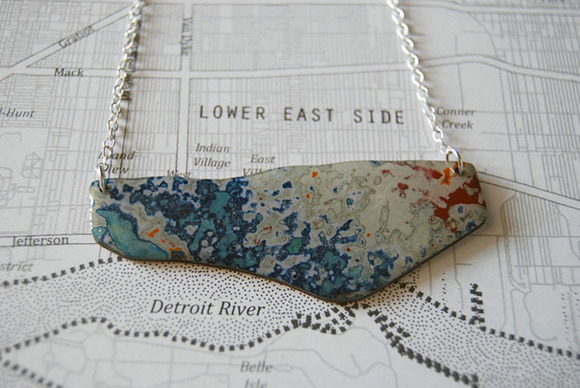 The idea came to Amy Peterson, an attorney, around two years ago when she was living next to a homeless shelter and had conversations with the women while walking her dog. During these conversations, Peterson learned that many of these women ended up in shelters through situations out of their control.

She realized that these women needed a transitional opportunity. Peterson quickly brought on fashion manager Diana Russell and in December 2013, Rebel Nell -- named after Eleanor Roosevelt's nickname Little Nell -- hired three women, one of which was living in a shelter while the other two were in transitional homes. 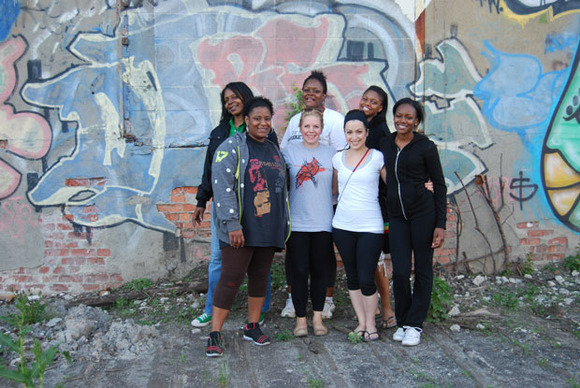 Today, all three women are still part of Rebel Nell's creative designer team and all are out of shelters and supporting themselves and their families. This year, Peterson and Russell plan to add two more women from shelters to the team. The two co-founders continue working their regular full-time jobs and don't pay themselves a salary at Rebel Nell so that their employees can make a living wage.

In Atlanta, Courtney Hammond and Beth Malone started their company with a noble art mission in mind and ended up transforming entire abandoned neighborhoods into prime real estate.

It started in 2009 when Malone, an art journalist, and Hammond, a sculptor, decided to come up with a platform to allow upcoming artists a way to get their work out into the world. The two Georgia State University graduates explored vacant, boarded up buildings around Atlanta for their shows. Unbeknownst to them, their shows attracted so much attention, those abandoned buildings would rent out and neighborhoods would thrive long after the artists left.

One of their earlier shows in the historic east Atlanta neighborhood called Edgewood Avenue turned the neglected area into one of the most active nightlife corridors in the city.

Since launching their non-profit Dashboard Co-op, Hammond and Malone have had around 20 shows and are now working with city planners. The co-founders plan to travel to other small growing cities in hopes of having a similar effect in developing neighborhoods.

"In the past 12 shows that we've had, 11 of the spaces have rented out," says Hammond. "These are entire floors, from high rises in downtown to small store fronts."

As desire for social good increases in popularity, it's difficult to tell whether businesses that started with this mindset is merely a trend or something that will stick around. Either way, consumer awareness is something that can't be reversed, according to Bohannon.

"Even when this trend wears off, consumers are going to be left with a mentality that's so much more aware," she says. "They're going to wonder, 'Where's my stuff coming from? How does it affect the community that it was made in? What happens after I'm done with it?' I don't think it will ever go back to not being on the table anymore."

Like it or not, business is changing and with these inspiring women at the forefront, it's definitely changing for the better.