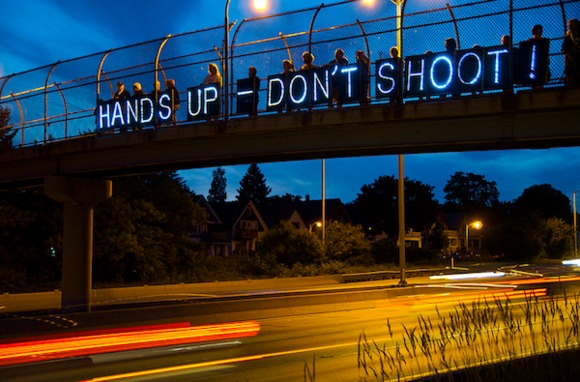 Since the fatal shooting of unarmed teenager, Michael Brown, took place in Ferguson, MO on August 9, a heated conflict between the police and demonstrators in the area has escalated to the point of national emergency. On August 16,  Missouri Gov. Jay Nixon declared a curfew beginning at midnight and stressed that police enforce the rule by communication only. However, reports that police officers fired tear gas at protestors in the streets flooded Twitter last night. Accounts of protestors throwing Molotov cocktails at officers, looting businesses, and blocking roads have also been cited. Attempting to quell the chaos, Nixon called in the National Guard today to "help restore peace and order and to protect the citizens of Ferguson." Last week, Amnesty International sent a 12-person delegation to the St. Louis County city to observe police and protester activity and train local activists on non-violent demonstrating.

Adding fuel to the fire, the New York Times reported that Brown's autopsy shows he was shot at least six times, including two shots in the head. No gun powder was found in Brown's body, which suggests that he was not shot at close range. Dr. Michael M. Baden, the former chief medical examiner for New York City, flew to Missouri on Sunday to conduct the autopsy at the Brown family's request. According to the NYT, he reviewed the autopsies of President John F. Kennedy and Rev. Dr. Martin Luther King Jr., and has performed more than 20,000 autopsies throughout his career.

During times of crisis, trusted new sources can be hard to come by. The race for breaking stories and accumulating page views takes precedence in most media circles. Not being in Ferguson myself to witness how this story is developing, I'm not sure what to do other than try to inform people of the tools available to help them share firsthand accounts of what's happening on the ground and to inform them of their human rights.

Here are some digital tools to aid residents and empower citizen journalists in their hour of need in Ferguson and beyond.

I'm Getting Arrested does exactly what it sounds like it does. The mobile app enables anyone, with one click, to broadcast a custom message to SMS numbers in the event they are arrested.

StoryMaker is an open source app that enables journalists to produce and publish professional-grade news with their Android phone as safely and securely as possible.

Informacam creates a snapshot of the environment in which an image or video was captured to answer questions regarding the “who” “where” and “when” of an incident, and then encrypts and sends the files to a trusted source.

Panic Button, which was developed by Amnesty International, turns your smartphone into a secret alarm for when you're in trouble. Features include emergency SMS, a location map, rapid and discrete alerts, and data protection.


What web or mobile apps do you think would be useful for the people of Ferguson?