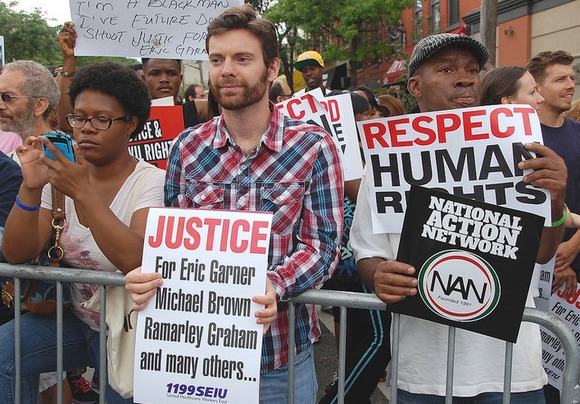 “I Can’t Breathe” signs and chants blanketed the streets of New York City Wednesday evening—emblematic of the outrage the public is feeling after a New York grand jury declined to indict a white police officer for chokeholding and killing a black, asthmatic Staten Island man. The announcement triggered thousands of citizens to take to the streets in Manhattan and in cities across the U.S. to protest. Captured on video in July, the deadly incident unfolded when officer Daniel Pantaleo, 29, grabbed the neck of 43-year-old Eric Garner for allegedly selling loose cigarettes. Though chokeholding is illegal in New York, and Garner’s death was officially ruled as a homocide, no explanations for the grand jury’s decision have surfaced. Could we see a transcript of Pantaleo’s testimony, please?

While most of the protests were peaceful, at least 83 arrests took place, according to the New York Daily News. Traffic was halted briefly along the West Side Highway, Columbus Circle, and at the Lincoln Tunnel, but no major violence or injuries have been reported. Protests are expected to resume tonight in Foley Square in lower Manhattan.

This turn of events is transpiring hot on the heels of a Missouri grand jury concluding last week that no crime was committed when Darren Wilson, a white police officer, shot and killed Michael Brown, an 18-year-old unarmed black man, who was followed for robbing a convenience store in Ferguson.

While the two cases differ in circumstance and cause of death, the undeniable, unavoidable common thread that the nation is in an uproar over is clear. If you are a black man in America, you are paying a penance for any crime that has ever been committed by a black person in America. In the killing of Michael Brown, conflicting witness reports and forensics have led to heated debate about Wilson not going to trial. But in Eric Garner’s case, the proof is in the video. And any scientific testing to examine the cause of his death is moot. He had asthma. He was swarmed by multiple police officers. He was choked. And he died on July 17, 2014 after being forced to the ground and saying repeatedly, “I can’t breathe.”

Last week, President Obama announced he would be allocating $50,000 in funding for police body cameras. Are cameras intended to monitor the actions of police officers who are supposed to be protecting and serving the public the answer? It won't hurt, but it's not targeting the root of the problem, which is racial disparity, racial profiling and police brutality.

Esaw Garner, Eric Garner’s widow and the mother of their six kids, called her husband’s death a “modern day lynching.”  Some disagree. While being interviewed by CNN, Republican Congressman, Peter King, said Garner is dead because he was obese and unhealthy. King's comments alone are enough to ignite a protest.

The news of the non-indictment has set Twitter aflame with chatter, as well. Last night, the social media platform saw a massive outpouring of people sharing personal experiences and opinions about the differences between how white people and black people are treated by the law when the hashtag #CrimingWhileWhite spread like wildfire. Here are a few tweets that caught our eyes.

Whatever your opinion of Brown’s and Garner’s death is, and whatever you think should happen to officers Wilson and Pantaleo, I encourage you all to talk about your views openly. Get into uncomfortable, awkward dialogue. Use your voice, and be thoughtful and organized in your execution. This is how real social change occurs. Cameras may not have been the solution where the grand jury was concerned in Pantaleo's case. But all citizen journalism efforts help keep the public informed. And fueling animosity in a nation that is already divided in its politics is never the answer.

For people wanting to take action, there are tools and resources to help you. From July to October, multiple petitions initiated in response to Garner’s death and to end police brutality begin sprouting up on Change.org. The conversation is just beginning. Don’t stop now.

Attorney General Eric Holder announced last night that the Justice Department will launch a civil rights investigation of Garner’s death. Know now your civil rights! They are the same rights as every individual in this country, irrespective of race.

Stay peaceful. Listen. Stay educated. If you're protesting and doing your part to document what's happening in the streets, check out The Toolbox's roundup of tools and articles for protesters and citizen journalists here.