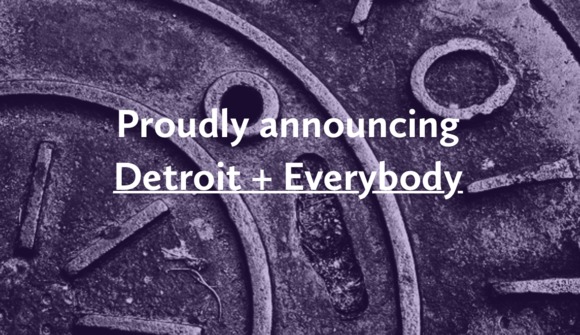 Detroit is a historic, iconic, and resilient city whose citizens have been facing financial hardships, water shut-offs, severe lack of access to the internet, and a failing education system. Despite the hardships, innovative citizens have been developing cultural, social, technological and economic ways to get the city back on its feet. The creators of Breakout, an event happening June 12-14, hope to unite the people of Detroit and shine an entrepreneurial light on the area.

Breakout is designed to bring together a network of community organizers, business leaders and public officials with the people of a chosen host city to exchange ideas, form friendships, and expand resources across communities. In the last year, Breakout events have taken place in Miami and New Orleans.

For the Breakout weekend in Detroit, co-founder Michael Farber and his team have carefully selected six local businesses, all with a focus on social impact, to meet with and discuss how they can further develop their business models. The event series is designed to cultivate an inclusive process—not simply deliver services to a city and then pack up and leave. The goal is to create a kind of continuity through networking and connecting business owners with potential investors, as well as advising companies moving forward.

“We want our attendees to experience and galvanize with the local community. To that end, we believe the one thing we can give forward to the city, is including local entrepreneurs into our network effect." says Farber.

Two businesses being featured during Breakout include Detroit Soup and Detroit Water Brigade. Detroit Soup hosts dinner events during which micro-grants are awarded to presenters delivering pitches about projects that will improve the city, while the Detroit Water Brigade works to bring relief to families struggling from water shut-offs in the area.

By putting the local community on display, Breakout is aiming for inclusivity and trying to steer clear of the “savior” complex that often involves the act of giving something to a community and then leaving. At the same time, Farber and his team and the local Detroiters they’re teaming up with aren’t seeking to save the day and solve the economic crises over the course of a weekend. They’re plan is to listen, collaborate and learn. While the Breakout weekend does come with a price tag attached for attendees, a number of local residents will attend free of charge.

When asked about his intended outcomes for Breakout, Farber shied away from feel-good, overtly-optimistic statements.

“There’s just no way to back those up,” he says. “My hope is that more businesses will move into the area and jobs will be created.”

While Farber may talk like a realist, the name of this weekend’s Breakout event “Detroit + Everybody," suggests an air of optimism. The city is ready to demonstrate what it has to offer, and the world is ready to see.