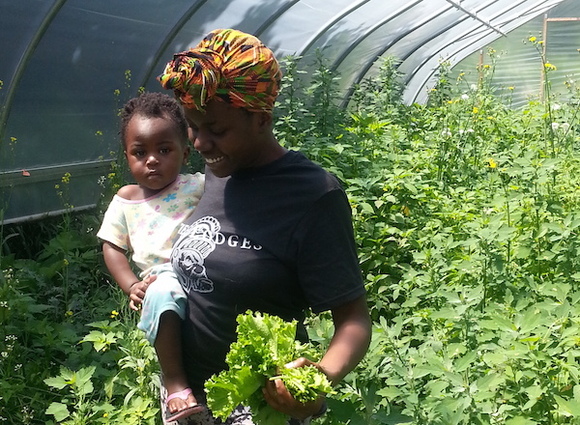 In recent years, major cities such as Detroit, Brooklyn, Baltimore, and Oakland have seen an increase in urban farming. More than just a hipster fad, rising concerns around food safety have made urban farms a prevailing trend. Locally sourced food items have become a very common fixture in both food menus and major grocers.

In Detroit specifically, urban farming projects date back as far as the 1900s and today help a city concerned with the quality of food, as well as accessibility. With nearly 1400 reported urban communities, Detroit has become an important center of the urban farmer movement. For one Detroit resident and urban farmer, Atieno Kasagam, farming is a way of life.

Atieno’s first memory of farming goes back to her roots in Kenya, as a child with her mother who was also a farmer. As she walks through her own garden full of tomatillos, kale and herbs, she smiles at the idea of choosing to use her own plot of land to farm. She’s been doing it for nearly three years now and openly shares how she feels about her work.

“Urban farming is like drinking water or eating food,” says Atieno. “It is not something I want to specialize in as a professional identity, but what I love is the stories.”

It is the conversations and discourses leading to new findings that bring Atieno so much satisfaction. The process of identifying lesser known plant life can be time consuming, requiring research and an absolute certainty of what is edible is before cultivating and feeding her family. The discoveries have been rewarding. Outside of the Internet, she collaborates with urban farmers to identify plant life and has even found that herbs native to her Kenyan cuisine grow freely in Detroit.

“Sometimes it’s laborious but the pleasure and experience gives me appreciation for the work,” she shares.

It is Atieno’s appreciation for this work and community that recently led her to participate in a Detroit Soup event, a crowd-funded dinner where folks gather to pitch their creative business ideas with the intention of winning the money raised by the dinner entry. Atieno’s project is tentatively called the Detroit Urban Farmers Film Series. And while she continues to find ways to fund this project, Atieno is impassioned by the idea of making the film series a reality. She says it’s important to “create spaces where urban farmers can share soft stories about their work and that the city as a whole needs to see what urban farmers are doing to understand the process that goes into cultivating the healthy, sustainable food feeding Detroit.

Even though Detroit has passed Right to Farm legislation, most of these laws only protect rural farms, not small-scale farms.Unlike cities like New York and Chicago, Detroit residents are not permitted to keep chicken, rabbits or goats. And while Atieno abides by the zoning restrictions, there are times where people driving by might see a mulched garden instead of lawn and mistakenly think the land is in violation of city ordinances. As a result, Atieno and her family have faced constant unnecessary attention from authorities. She states that more than a few times, police officers have shown up, pounding on the door, only to see that she is not in violation of any city ordinances.

“They see that I am just mulching my tomatillos; they see it’s just a garden” she says. “The tickets are always rescinded but at the moment when the police are suddenly at your door with sirens blaring in the background, ‘what can you say?’”

In those moments, Atieno and her startled family feel powerless. She knows this attitude can change with more awareness about their work. Most people are not familiar with what is involved in maintaining farm but for Atieno, these are the people that need to hear the stories of her community in order to understand why this work is so important and why it needs to be protected.

Her hope is that a video series she’s developing will garnish enough attention to give way to more progressive legislation. Both Atieno and her husband are active in this legal movement, but with nearly 30,000 acres of rich soil ripe for agricultural cultivation, adequate and inclusive legislation is long overdue. In the meantime, Atieno, her family and the community of Detroit Urban Farmers wait for the law to catch up.

Most assuredly, the community of urban agriculturists is passionate and widespread. The growing need for urban agriculture in the US alone is forcing local authorities to re-evaluate legislation for small-scale farms.

3 Must Have Tools about Urban Farming

Is there a need in your community for more progressive legislation? Share your opinions and see what others are saying about the urban farm movement, using Brigade, a social network for politics and social change.

Are you or interested in joining the urban agricultural community? Find the resources you need with the Urban Farming Assistant Start app, designed to provide up to date information and helpful instruction for beginning Urban Farmers.

Find out what local farms are producing by using the Locavore app, which also features healthy recipes based on what is fresh and in season in your neighborhood.

Stay tuned for more #DetroitStrong stories, tools and ideas! Please submit any social impact tools that help you in your endeavors to be an everyday activist.