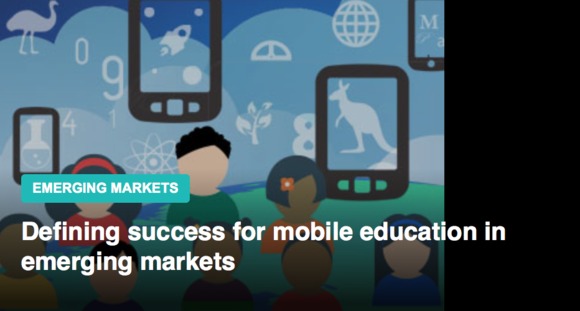 For people in developing countries, mobile phone ownership can mean the difference between illiteracy and having an education, which can ultimately mean life or death. In sub-Saharan Africa 10 million kids drop out of school every year. However, educational resources available via mobile connectivity are helping people in the developing world overcome obstacles to learning, such as accessibility and cost.

“We need less reinventing of the wheel and more alignment in the types of services we are offering in Africa and across the emerging world.”

According to GSMA, SIM connections in the developing world exceeded 5 billion in 2012, and they’re now increasing at 17 per second. That’s equal to an opportunity for more than 5 billion people to benefit from mobile education, or mEducation. Pocket-size libraries, SMS career training programs, and mobile educational videos are proving that edtech can help students in the most remote, hard to reach areas across the globe.

How do you measure mEduation success?

Hannah Metcalfe, Community Insights Manager at the GSMA - Mobile for Development, says it depends on the mEducator’s goals.

“Defining success isn’t always straightforward, and the many players working in this field would define it differently,” says Metcalfe. “If we are talking about the direct impact on the end user, then I would say Worldreader, the Jokko Initiative and Text2Teach are some of the most successful.”

What's texting got to do with it?

A report by the Pew Research Center relays that the most popular cell phone activity in emerging markets is texting. No surprises there. Text2Teach optimizes this macro trend by delivering educational video materials to schools in the Philippines through combining satellite, television and mobile technology. Using mobile phones donated by Nokia and internet connectivity provided by Globe Telecom, teachers can download any of 400 audio and video materials in a constantly updated catalogue for students in grades 5 and 6. This works through connecting a mobile phone to a TV or video projector so the materials can be played in class. Within a decade, Text2Teach has reached 300,000 students.

According to UNESCO, 50% of schools in Africa have few to zero books. Worldreader brings digital books to children and their families through e-readers and the Worldreader Mobile app, which allows anyone anywhere to access the nonprofit’s library of 27,221 e-book titles. Since 2010 Worldreader has reached more than 4 million people in 57 countries.

Established by UNICEF and Tostan, an NGO in West Africa that cultivates human rights-based community empowerment programs, the Jokko Initiative teaches literacy and organizational skills through mobile phones, and makes it possible for a user to communicate with an entire network of people through simply sending one text message. In Senegal, the Jokko Initiative provides a low-cost system to reinforce group decision making in villages.

The aforementioned products are just a few mEducation tools having an impact in developing countries. The GSMA’s Mobile for Development division actively tracks over 1800 products and services. While this number is increasing, the scale is not.

How can mobile for development products scale?

That’s not all. Mobile network operators play a crucial role in mEducation and mobile for development overall, as they are the providers of the networks through which M4D products are delivered.

The proliferation of mobile phones and the findings above prove that there’s never been a more opportune time for major mobile players to create business models designed for long-term social impact and business expansion. And someday the two will be inseparable.

This post was originally published on Cisco's Technology News Site.