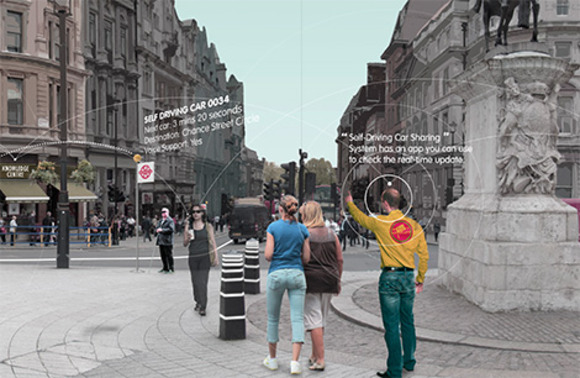 At its finest, urban development is human-centered—of the people and for the people. In London, a vast playground of nearly nine million residents, this approach is vital for cultivating smarter, more connected communities, as well as promoting the health and well-being of citizens. By the year 2021, the city’s population is expected to grow by a million. More people means more waste, more pollution, and a more pressing need for efficient public transport, energy, education and healthcare systems.

To encourage digital inclusion and city participation in addressing these issues, London Mayor, Boris Johnson, is promoting The Smart London Plan, a strategy for leveraging technology and creative talent as a means to solve future city challenges. Anything this massive of course requires collaboration.

Driving this sentiment forward, the London-based organization, Future Cities Catapult works with Microsoft and Guide Dogs to unlock the potential of people and their environments through an initiative called Cities Unlocked. Operating at a granular level, this initiative is building solutions of human-centered design to help a group of people whose needs are sometimes overlooked when it comes to amplifying a city’s positive attributes. These people are people with sight loss.

To help humunize the development of their project, the Cities Unlocked team commissioned the Helen Hamlyn Centre at the Royal College of Art to shadow eight people with sight loss as they planned and undertook walking journeys. The discoveries made led the group to focus its attention on the train station as a place that people with sight loss often find overwhelming.

The designers then created an entire solution including a headset that’s essentially a 3D soundscape prototype, which works through interactions with Bluetooth sources, active RFID beacons and GPS, enabling a user’s position and orientation to be tracked with high levels of accuracy. The headset interacts with the immediate environment via the embedded beacons, providing non-verbal cues for improved orientation and navigation. ‘Non-verbal’ is essentially beeps and tones that are made to seem as if they are coming from the environment a user is in through binaural techniques.

“I would describe the process of almost painting with sound, painting with an element of navigation as being the experience that you get when you slip on the headset, and then you begin to experience the route,” said Angus Foreman, CTO Microsoft Service, Microsoft UK, in a video about the soundscape.

Is human-centered design a common practice?

The project team mades sure to check the technology with a test group of people with sight loss at every stage of its development.

“The [human-centered] approach requires that products and services are developed with input and engagement from those who will use them on a day to day basis,” explains Claire Mookerjee, project lead of urbanism at Future Cities Catapult. In this way the entire design process becomes an ongoing conversation with service users from understanding the problems they experience to creating the solutions to solve them.”

While this may seem like an obvious practice, Mookerjee says it’s surprising how rarely it’s used, and how often it delivers new ideas that transform the design process.

In the case of the 3D soundscape, the initial results were encouraging. Guide Dogs’ research found that 10 out of 17 measures of well-being were significantly increased when using the technology, with 62% of participants showing an increase in safety, confidence and resilience. The technology also made the journey less labor intensive and mentally challenging, reducing the need for planning journeys, and increasing awareness of location and surroundings.

How important is local community involvement in urban development?

While cities at large are a priority, the work Cities Unlocked is doing to empower citizens with sight loss exemplifies the importance of community involvement.

“Communities are made up of individuals, each of whom will have different needs and desires —some of which will be contrary to those of other members of the community – but all of which needs to be understood in detail when it comes to designing effective urban environments,” says Mookerjee. “Bringing people together to help them understand the different needs of other members of the community is also a valuable way of resolving conflict and identifying new solutions.”

Indeed, understanding the expectations of both individuals and communities is crucial for establishing a firm foundation of new ideas and human-centered approaches.

Mookerjee adds, “Without community involvement our projects would have limited legitimacy and life expectancy."