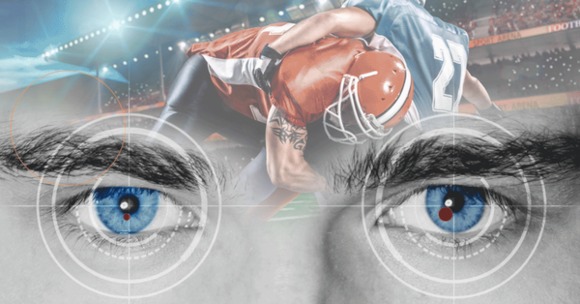 This post was originally published on Cisco's Technology News site, The Network.

With football season beginning, athletes and fans are ready for full-throttle action. Amid the excitement, safety concerns over the effects of concussions caused by the high impact sport are rampant. The CDC estimates that 1.6 million to 3.8 million concussions happen each year and that 5 to 10 percent of athletes will experience concussions, while 78 percent of those concussions happen during games. But now, thanks to the research and developments of Dr. Uzma Samadani, a neurosurgeon and co-founder of the neurodiagnostic company Oculogica, an eye-tracking device used in emergency rooms may one day be available at sporting events.

Disconnected eye movements have been associated with traumatic brain injury since ancient times. Samadani and her team created an algorithm for eye- tracking in which the Cartesian coordinates of both pupils are compared to each other as a patient watches a moving image. The eye tracking tool can be used to measure the damage of concussions and brain injuries.

“Our data demonstrates that the more severe particular eye tracking metrics are, the more severe a patient's symptoms are,” says Samadani. “We have done what is called a Spearman Correlation to demonstrate this relationship. The particular eye tracking metrics are those that correlate with how well a patient's eyes move together in the horizontal plane.”

“We believe this technology will change the way brain injury is diagnosed and classified,” says Samadani. “We eventually would like to make the technology portable and usable on pocket devices.”

What are other ways eye tracking technology can be optimized?

The gaming industry is also harnessing eye-tracking technology to create immersive, augmented reality experiences. SensorMotoric Instruments (SMI) designed a system to track the eye movement of users of Epson’s Moverio BT-200 headset, or binocular smart glasses. When a user is wearing the headset and sees digital media above geographic locations, the eye-tracking technology shares accurate data on what the user is looking at so that images are overplayed properly.

While fun and games are always marketable, the potential for eye-tracking technology to save lives can’t be beat. SMI is also using its biometrics to aid research on cognitive and neurodegenerative disorders. According to FindBiometrics, SMI’s RED250mobile eye-tracking system offers “a 250Hz sampling rate, saccadic eye tracking, and high adaptability to head movements.”

Meanwhile, the eye-tracking technology creator, Tobii, has developed a kit that allows people to implement eye-tracking tech for consumer apps and games. Beyond the gaming and entertainment markets, Tobii develops eye-tracking solutions for academic research, as well as automotive, industrial and medical purposes.

With advanced biometrics emerging in the name of healthcare progress and hospitals beginning to adopt technology more fluidly, on-demand data on patients may be available sooner than later, and as Samadani has predicted this technology may change the way brain injuries are discovered and diagnosed.