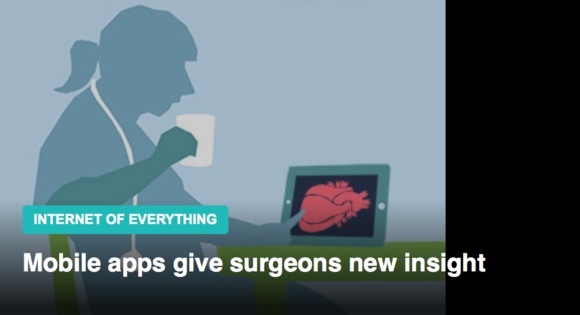 When you drive a car, do you think about how to drive it? Unless you’ve just received your driver’s permit, odds are driving is an intuitive process for you.

Plastic surgeon and entrepreneur, Jean Nehme, wants to help other doctors have the same kind of ease when performing operations. He’s doing this through Touch Surgery, a mobile surgical simulation app that educates healthcare professionals on how to perform medical procedures step by step in graphic 3D detail.

While years of medical school are intended to prepare doctors for the operating room, the benefits of shared information and insights from colleagues working in the real world can’t be beat. Two years ago, Nehme, who is the CEO of Touch Surgery, and fellow surgeons Andre Chow, Sanjay Purkayastha and Advait Gandhe learned how to code and built a collaborative community of over 150,000 surgeons who map out operations and learn from one another through the Touch Surgery app.

“As surgeons ourselves, we were trying to solve a pain encountered,” says Nehme. “How do learn how to operate safely and effectively? What everyone relates to as a surgeon is the question of can you actually do the operation bit?”

The app currently features over 100 procedures and caters to 500,000 users including patients who want to learn about upcoming operations they’re undergoing in the future. Within Touch Surgery’s collaborative tool, which is private and closed for different groups, users can take photos of procedures and unusual cases and track activity. People can also comment and ask questions.

Nehme cited a specific case involving a dog biting off a child’s ear to illustrate the value of the tool.

The impact of Touch Surgery and the emergence of tools such as Curely and iTriage, which connect people to physicians, are transpiring at a time when healthcare is calling for disruption. According to the recent Goldman Sachs report “The Digital Revolution comes to US Healthcare,” the internet of things has potential to save the healthcare industry over $300 billion. Add to this the rapid speed at which digital natives want frictionless access to services and goods and you have ample opportunity for technology to advance healthcare on multiple levels.

“Surgery right now and healthcare are weird because great tech is there, but the field is very fragmented,” says Nehme. While healthcare is 10.4 percent of global GDP getting systems adopted takes ages.”

According to a study by MobileHealthNews, there are only 200 apps available from US hospitals for their patients. While the distribution of apps may not be the silver bullet answer to saving lives, the embracement of technology in a world where consumers are demanding frictionless access to services and goods across industries is crucial. And until healthcare becomes less ‘fragmented,’ there are tools to meld the most important intersection in medicine—the relationship between doctors and patients.