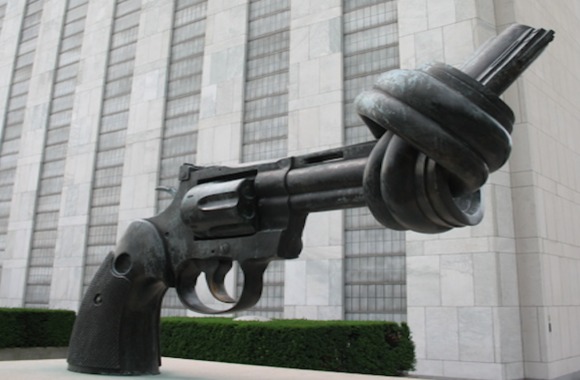 Prior to last October 1st, it would have been safe to say that most of America was unfamiliar with the Umpqua Community College in Roseburg, OR. As a result of the tragic shooting that befell UCC, this incident has served as a lightning rod for criticism against consistent government inaction on the topic of gun violence and reform of gun safety laws.

As the most recent case of deadly mass shootings in the United States, the 10 deaths in Roseburg, could become just another figure in a pattern of events unique to the United States. In President Obama’s press conference, this is a point which he very clearly expressed in response to the shooting. Such types of atrocities do not happen in any other advanced nation on the planet, and repeatedly the U.S. stands by and does nothing in response.

The Cycle To Break

In the wake of previous tragedies, public outcry has done well to make known the feelings of loss, fear, and insecurity held by the families and the general public. The response to each case, however, falls short of what it wants to accomplish—solving the gun violence problem.

Every time a shooting occurs, the public is saddened and news media take to focusing in on causal reasonings that lead up to the attack and not potential solutions. Gun safety advocates stress that public officials need to do more and sooner.

Meanwhile gun rights proponents reiterate a need for greater availability of guns and open carry laws. Think tanks and op-ed editorials espouse the potential outcomes of the legacy of this incident; and then all goes quiet. Then the media subsequently move on and to some degree so does the general public. This cyclical process does nowhere near enough to address this phenomenon, hence the President’s speech on gun violence.

The Call For Data-Driven Action

President Obama's enervation over the shooting and anticipation of the likely legislative inaction that would follow sparked him to challenge to the media to fact-check these claims. The hope is that quantifying the sheer volume and frequency of gun violence in the United States will prompt lasting effective change on the issue. The intention is that in so doing the convincing evidence would come not from the Oval office, but from the strength of heavily scrutinized and objective data on the matter.

Taking politics out of this debate is a stance which may hopefully bring about progress on a societal ill that is predominantly unique to only the United States.

Given the recent press coverage, we can only hope that Obama’s call to data-driven action comes to fruition. In the wake of previous shootings, the commentary from the media has often centered on the motives of the shooter, citing mental illness. However, the notion that mental illness is the root cause behind these shootings is flawed. While it is true that the mentally ill may be more prone to a violent attack, the ease with which one can attain a gun, mentally ill or not, is astounding. What also seems to be continually overlooked is that more guns and gun ownership logically means more gun violence.

Recently, Simon Rogers of The Guardian estimated that, “with less than 5% of the world’s population, the US is home to roughly 35–50 per cent of the world's civilian-owned guns, heavily skewing the global geography of firearms and any relative comparison”. Furthermore, “the US has the highest gun ownership rate in the world—an average of 88 per 100 people. That puts the country first in the world for gun ownership.  Even the number two country, Yemen, has significantly fewer - 54.8 per 100 people.”

What's War Got To Do With It?

What is unique about that comparison is that the US, a developed nation of over 360 million people, has not faced the threat of war or domestic conflict on its own soil in over 70 years. Meanwhile, Yemen is in the throes of its very own civil war, but still claims less gun ownership per capita. When put another way, in comparison with other advanced nations, the US stands out in the worst possible ways due to the sheer magnitude of gun deaths, with 10.6/100,000 people.  Finland has the next highest gun deaths next to the U.S. with a ratio of 3.5/100,000. The sheer drop in the number of fatalities from gun deaths, reiterates how abnormal gun violence is for the United States when compared to any other nation around the world.

At the Toolbox.org, we hope to help bring about grassroots change through the engagement of gun safety and conflict mediation at the local level. You can participate by utilizing our toolkit on this issue.

The assurance of people’s safety through data and empiricism doesn’t have to be politicized, even if legislation for change and gun reform are. You can help make a difference by getting involved and creating more visibility and pressure on this issue.