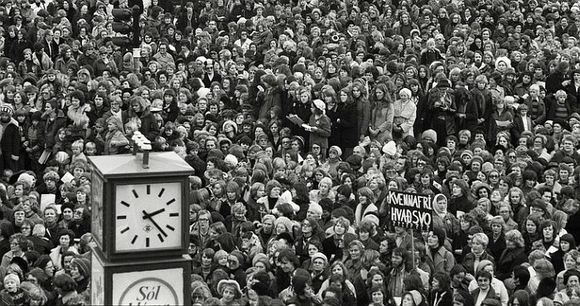 In 2015, Iceland celebrated a centennial anniversary, the 100th year of recognizing Women’s Suffrage. Come October 24th, the small country situated in the North Atlantic will also celebrate the 40th anniversary of Women’s Day Off: the historic day that 90% of Icelandic women went on strike for equality, bringing all government and industry to a halt, and reinforcing the strength and significance of women in Icelandic society.

Since that day, the country has been a leader in gender equality, with the stats to prove it. Women have served in the highest government offices in the country, including roles as President (Vigdís Finnbogadóttir, 1980) and Prime Minister (Jóhanna Sigurðardóttir, 2009), whose contributions paved the way for Iceland to become the first government with an equal number of men and women participating in government office. For the past six years, Iceland has placed first on the World Economic Forum’s Global Gender Gap Index, as well as being one of the top countries on the 2015 OECD Better Life Index. Women in Iceland now have the advantage of envisioning themselves in key decision-making roles, in no small part due to the availability of prominent role models in these public and private sectors.

It is a mobilizing factor:

"I am happy to have been able to play a part in helping to make Iceland greener,” said Vigdís Finnbogadóttir, as she reflected on her career, and on becoming Europe’s first female president. “I am also glad that I have been able to help give women self-confidence in Iceland. They come to me, and they say ‘for all of these years, you have been a role model for me.' They tell me they think ‘if she could do it, I can do it.’ This makes me very happy.”

She was quick to clarify that as President, she did not work specifically for women in Iceland. Rather, she worked for the people of Iceland. While this is certainly true, she continues to be an inspiration for women of all ages in her nation and abroad.

Perhaps the difference between Iceland’s success and that of other nations is rooted in its decision to activate its entire society and workforce; to make a conscious choice for gender equality. “The Icelandic people had decided that this is how we want our society to be,” says journalist and media personality Thóra Arnórsdóttir.

For these reasons, Iceland has outshined larger countries, even within The Nordics, and secured a reputation globally as the beacon for gender equality.

But, There’s Still a Way to Go…

Even the world leader in gender equality has yet to clear significant hurdles on home turf. These include eliminating violence against women (22% of Icelandic women over the age of 16 have reported incidences of violence in their relationships), overcoming wage disparities between genders (a problem that persists, weakening paternal leave), and the perception that most domestic and child-rearing duties are the responsibility of women.

Thóra is familiar with the latter, both as a candidate and as a spectator.  “Vigdís Finnbogadóttir, being a single mother, had to endure incredibly offensive questions during her campaign in 1980,” she says. “Women have pushed and fought the patriarchy, putting themselves on the line for every step taken forward in the ever-continuing battle for equality. Tolerating the contempt and attacks on their person that come with it. I have immense respect for my foremothers that paved the way for my generation to punch harder into the glass ceiling...”

Likewise, perceptions of mothers specifically as being incapable of executive and public office plagues society. “When I ran for president, pregnant with my third child, an old woman once stood up in a meeting, saying: ‘Icelandic women have always worked hard and taken care of the family at the same time. I don‘t see why [the Presidency] should be any different…’,” Thora recounted of her 2012 run, in which she proved to be the toughest competition. “Problem is, not everyone thought like that… If [they had], I‘d have won.”

Thóra also pointed out that both Tony Blair and David Cameron had children while in office as Prime Ministers in the UK. “I never saw anyone doubt that they could handle their jobs properly with a newborn in the house. It was rather seen as quite cute. Had they been women, you can just imagine how different the treatment would have been.”

Iceland, like many Nordic countries, is revered for its policies on parental leave, which is popularly thought to have helped to reduce workforce discrimination, while enabling fathers to take on a more meaningful and active role in child-rearing. But in December 2014, the findings of a study on parental leave showed that fewer men in Iceland were opting to take their leave. First introduced in 2000, many attribute the declining number (down from more than 90% in 2008, to 77% in 2013) to an economic and cultural shift in Icelandic society, which includes the cap placed on parental leave pay after the economic crash, and persistent wage gaps within two-income households that make a father’s pay more consequential. Iceland Monitor reported the country’s gender pay gap stands at 18.3%. As The Reykjavik Grapevine points out, this is higher than averages in both Europe and the USA.

The people of Iceland have historically proven active in lobbying against laws that hinder the betterment of society. Within the last year alone, Icelanders have focused on women’s rights, with record-breaking participation both on social media (Beauty Tips, #FreeTheNipple, #þöggun) and across live events (Gender Equality in the Arctic, Slutwalk, WE2015, 100 Years of Women’s Civil Rights Conference).

Una Hildarddóttir, spokesperson for Femínistafélag, says the organisation “is capitalising on the increasing online momentum of new feminism and women’s rights, which we feel is organic and independent of the 100 year anniversary of women’s suffrage, to lobby for change in the legal system, educate law officers, change how society views victims of violence, and shift shame away from victims so they can heal.”

Another important focus of the organisation is anti-SLAPP initiatives. “We are trying to build seminars and work groups, to establish a network, [offer advice]… and to pay legal costs for victims, to address the use of this ‘weapon of silence.’ We are beginning to collect examples of cases such as these and make them accessible…”

Icelandic media is also quick to cover events of this nature. The additional insight this sheds on the matter has increased pressure for policy changes from the citizen body. But even media has its biases.

“As the editor-in-chief of a current affairs program on public TV, I‘ve been trying so hard to even out the gender bias of the interviewees,” says Thóra Arnórsdóttir. “It‘s impossible. Men are always 2/3rds [of the voices], against 1/3rd women. We mostly interview people because of the position they hold. Ministers, CEOs, presidents of organizations. Most of them are men…”

At the UN Sustainable Development Summit in New York in September, Iceland pledged to achieve gender equality by 2030, and set aside an undisclosed amount of funding to support this goal. Earlier this year, Iceland’s Foreign Minister Gunnar Bragi Sveinnson made waves by orchestrating a men-only Barbershop Conference at UN Headquarters in New York, which was inspired by and followed guidelines established by #HeforShe, designed to “change the discourse among men on gender equality”.  While the event itself was initially met with skepticism and criticism for excluding women, very few can debate the merit and importance of including men in the process of achieving greater gender equality.

A surprising area where equality is making headway is in business. Since the economic crash in 2008, Iceland’s startup community has flourished. The crash flooded Iceland’s market with a new class of creative entrepreneurs who shared resources to rebuild the Icelandic economy and job market. It offered women an opportunity to get in on the ground floor of new corporate structures.

But that doesn’t mean the disparities have vanished. On the contrary, the startup community offers interesting insight into core problems afflicting other business sectors:

"There is a growing number of women entrepreneurs… but maybe 1 in 10 pitches we see have a women on the founding team," said Helga Valfells, CEO of Nýsköpunarsjóður Atvinnulífsins, a prominent venture firm in Iceland. "We are very conscious of this fact and try to do our part. We hire the best professionals for our investments, and our investment committee is 50% men and 50% women, with three women on our team making investment decisions."

Helga sees opportunity on the horizon aligned with Iceland’s higher education system. "In Icelandic universities, more women are seeking degrees in computer science and other technology fields, which opens opportunities for women here to capture a larger stake in the wealth created around technology." The technology sector is one of the fastest growing new industries in Iceland.

Engaging more women in decision-making positions could also prove to be the quickest route to achieving gender equality in Iceland’s economy, especially where salaries and wages are concerned. As of 2014, 88% of Icelandic women were engaged in the workforce. Women achieving higher positions within that workforce has proven strategic: it spurs economic growth, diversifies Iceland’s portfolio of industries, and make the economy more stable.

"Gender balance in the boardroom improves both the bottom line and corporate governance," says Halla Tómasdóttir, Founder and CEO of Sisters Capital and a TED speaker. "Closing the gender gap in our labor markets may be our greatest economic growth opportunity, and can add as much as $28 trillion (26%) to our Global Annual GDP by 2025."

Several international conferences and local events have broached the subject of women in the board room, including June’s Inspirally WE 2015 in Reykjavik, which hosted a discussion on why “Women on Boards Need to be Unafraid to be the Different Voice”. Iceland, being one of few countries to stipulate gender quotas in board rooms, requires that a Board of Directors must consist of at least 40% of each gender for all limited and privately limited companies with 50 or more employees. A report by Dr. Auður Arna Arnardóttir and Dr. Þröstur Olaf Sigurjónsson, entitled “Board Selection in Times of Gender Quotas” (and based on a recent study) concludes that the implementation of “gender quotas on corporate boards in Iceland has been a success. [There has been] a large increase in the number of women on Icelandic boards…” Interestingly, many of the female board members surveyed for this study held similar or higher educational degrees than their male peers, but held less seats on average. This topic is becoming actively discussed in Icelandic business and academic circles, most often in relation to the aftermath of the 2008 crash, and in the hope of implementing practices for a sustainable future.

So, What Lies Ahead?

Iceland’s history of activism is unique in that it allows us to measure the constructive outcomes of a society striving to create gender equality. The current spike in activism, both online and off, is focused on changing legislation and creating a meaningful commitment to achieving that equality. This commitment, with its laundry list of gaps to address, spans all industry segments, as well as conversations surrounding Icelandic government and society. It means that despite having a long road ahead, Iceland is well positioned to maintain its stronghold as a leader on the Global Gender Gap Index, and an example for other nations to follow.