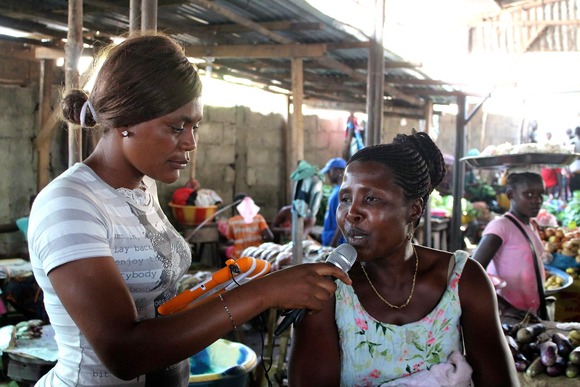 Media matters to women across the globe. Through the lens of media, women can see their roles in societies explored, understand their capabilities, relate to one another’s struggles, and realize solutions. The information media provides is especially vital in the hands of those whose lives can be changed by knowledge: in low-income and rural areas, where women especially are subject to health, reproductive, educational, and economic difficulties and misinformation. It goes without saying that women’s participation in their own narratives ought to be vital in journalism, but women make up only 33.3% of the full time workforce, and less in some parts of Sub-Saharan Africa, where participation is as low as 15%. But if female participation is so low, what are the statistics on female viewership in those same areas? Who has access to media?

Media As A Luxury

We do not often think of media as a luxury, and yet this is the case for the millions living in rural areas where entire villages remain out of range of the Internet, TV, and radio. In many of Sub-Saharan Africa’s most bucolic areas, the traditions of child marriage and female genital mutilation persist, and problems of sexual violence and teen pregnancy are commonplace. Having basic information on human rights, contraception, and pre-natal care can save lives, and empower women. The United Nations places access to information technology as the third most important issue facing women globally, after poverty and violence against women.This pressing problem is what led Sharon Bylenga, Founder of Media Matters for Women, and Valentina Barbacci, Executive Director of Media Matters for Women, to build a team whose combined knowledge of media and modern technology to formulate a sustainable solution.

Media Matters for Women (MMW) is a non-governmental organization founded in 2010 by a group determined media professionals, focused on bridging the information gap for Sub-Saharan women, by taking advantage of the fact that cell phone ownership is common in the rural households of West Africa. According to the UN, mobile telephone subscriptions have grown faster in Africa than in any other region in the world since 2003, and almost all are Bluetooth-capable, despite having no means for wifi connection. MMW put those devices to the test with two pilot projects in West Africa, wherein cell phones were used in an innovative way, as a broadcasting mechanism, using that Bluetooth technology.

Their innovative concept empowers local journalists by giving them opportunities they would not otherwise have in creating new content for their communities and regions, and which “broadcasts” their original content in local languages using cell phones. They are then archived, for continued and future use, and the hundreds of programs MMW journalists have created during two recent pilot projects can be heard on SoundCloud-- where they reach an even broader audience. In this way, knowledge not only becomes a communal resources, but it is also a communal effort.

Even more crucially, this solution offers communities an inexpensive way to receive and share information relevant to their daily lives. Feedback from MMW's initial test runs proved that the impact of disseminating reliable information in multiple local languages could play a huge role in positively transforming the lives of those currently left out of the “Information Age.”

One highly popular MMW program proves the point. The content covered the requirements for getting a birth certificate for a newborn child, which emphasized that all such certificates are free when a mother applies within a certain number of days after birth. Since the release of this program, the number of women reporting births in Sub-Saharan Africa has increased. Other highly impactful programs have been on the topic of resources for fistula repair, and women's role in agriculture.

Inspired by these first successes, MMW decided to take the project deeper, to test the approach across a significantly broader spectrum, in order to deepen the conversation rural women were having surrounding their own daily-life issues. A breakthrough success took place in Sierra Leone. When the Ebola crisis unfolded, this same Bluetooth technology was used to successfully create channels for relevant and timely information to reach women and girls in remote communities, so they could be at the forefront of informing their families and communities about health risks and safety procedures. Historically, times of crises have highlighted women’s role as a capable leader and provider, and given these media tools, the women of Sierra Leone’s villages were able to step up again.

The MMW pilot project in Sierra Leone consisted of a MMW team of three highly trained journalists and a project coordinator. Together, and with the support of MMW volunteers abroad, they created and disseminated 10-minute radio-styled broadcasts every week to Listening Centers they set up in places easily and regularly frequented by village women and girls. The broadcasts were translated into multiple local languages and then transferred via Bluetooth on mobile phones to women and girls in three areas of Sierra Leone — Western Region, Makeni/Bombali District and Kenema/Kailahun District.

An evaluation of MMW’s work after one year revealed that they had effectively created an active, low-cost network for women, most of whom are illiterate and did not have access to a news source in their language that focused on issues relevant to them. After the Ebola crisis hit, new funding was provided and because public gatherings were no longer possible, the three journalists created instead networks of "listener-distributors" in each of their regions. Each listener-distributor is responsible for sharing a podcast, passing it via Bluetooth to another listener-distributor in the next village (who in turn, shares with their community), until it reaches a designated Ambassador at the end of the network who reports results back to the journalist. This system proved as effective as Listening Centers in ensuring that MMW content reached all 45 villages without interruption every week.

Scope: Now That There's a Start, What Lies Ahead?

The project began with solar rechargers and digital recording equipment that allowed the journalists to produce and disseminate the content without any electrical grid, generator or the Internet. It has now grown into a movement of thousands of women and girls sharing information, learning from and entertaining each other, hearing crucial health messages, giving feedback, and joining in a movement that begins in their village and extends across their country.  By the end of the second pilot project, MMW’s nine networks reached 11,340 listeners per month. However, their listener base is actually much higher because of onward Bluetooth exchanges as well as the replays of our programs on community radio and informal sharing of our content beyond our network, including to men.

MMW journalist reports of the impact of their programs on individuals include powerful testmonies to the power of information. Audience appreciation is very high, as people report report regularly on the impact on themselves and their families and communities. They cite cases in which MMW’s timely Ebola reporting effectively improved Ebola transmission-related habits throughout the crisis, husbands renounced wife beating, violence within marriages was stopped, and men began to treating females in their lives with greater respect.

Now that the MMW concept is proven, the initiators of the project have found a way to make it scalable to other regions and countries. They created “MMW In A Box,” a free toolbox available on their website with information to replicate their operational approach. MMW has plans to expand soon into Cameroon and the Democratic Republic of Congo through partnerships with other NGOs and corporations. Their vision is to grow into a peer-to-peer network of content distribution targeting rural women and girls throughout Sub-Saharan Africa.

A main success of the programs offered in Sierra Leone is that they offered a new and trusted path for culturally sensitive issues to emerge, and at the same time offered livelihoods and professional training to many local journalists who would otherwise not have such opportunities. MMW programs address issues such as empowerment, human rights, health, participatory democracy and income generation. Through participation in the MMW network, women and girls have a voice in creating change in their communities, and in shaping the political and cultural vision of their country.

---This article is part of TheToolbox.org's #WomenInFront series, powered by Humanise. Learn more about the initiative at WomenInFront.net, or join the conversation on social media: Twitter, Facebook and Instagram.