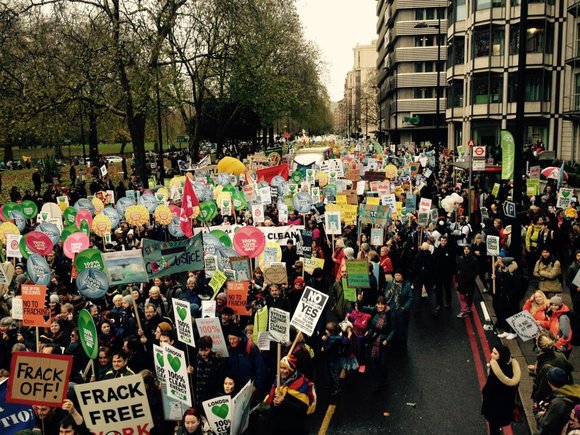 On Sunday, November 29th, more than 50,000 people took to the streets of London to participate in a global Climate March. Their ages, nationalities, and focus groups ranged, but they shared a powerful commonality: their demand for world government to create better sustainability and to employ legislation to radically reduce climate change.

The march, which began at London's posh Park Lane area at 1:00PM (GMT) and took the throngs past the Houses of Parliament to a final rally at Millbank, was one of many taking place across UK cities (with Bristol, Edinburgh, and Belfast also hosting major rallies), and part of a network of over 2,500 worldwide demonstrations last week. The fervor was ahead of the UN Climate Summit taking place in Paris, beginning today, Monday, November 30th.

The conference, called COP21, will be the first global meeting on climate change since 115 heads of state initially gathered at Copenhagen in 2009, to pledge their administration's commitments to the long-term goal of reducing carbon emissions. In Copenhagen, heads of state promised to limit global warming to 2°C between the years 2009-2100, with the aim of a 40-70% reduction in greenhouses gasses by 2050, and total carbon neutrality in under a century's time. A steep promise, but a necessary one. According to the Intergovernmental Panel on Climate change, the IPCC, without such a reduction, there will be a significant uptick extreme climate events in every part of the world, from increased storms and draughts, to extinction of farmland and wildlife. In Paris today, the aim is to put this promise into action by agreeing to short-term and long-term objectives.

This year's gathering will feature more heads of government than any previous convention on climate change, with a turnout of 190 countries.

The London march coincided with the pre-meeting of 1,300 delegates in the "La Loire" room in Paris, chaired by Ahmed Djoghlaf of Algeria and Daniel Reifsnyder of the United States. The early discussions were intended to solidify draft agreements, and to make the best use of time possible for busy heads of state. Laurent Fabius, COP21 President for 2015, stated that the mission this year was to reach an "ambitious compromise".

In London, it seemed campaigners were doing the same. Whether they hailed from Greenpeace or Hollywood, Oxfam or the World Wildlife Fund, those at the rally joined as one voice, sharing stories of devastation already perpetrated by climate change, from the destruction of farmland due to rising sea levels poisoning soil with salt water, to the disappearing habitats for wildlife such as polar bears: both a result of the melting polar ice caps.

The event also attracted a number of activist-celebrities, including TheToolbox.org's very own co-founder, Peter Gabriel, who summed up his thoughts on the summit: "The issue is really being taken more seriously and the politicians-- I think they see these numbers too-- will begin to act definitely and, I hope, achieve agreement."

Fashion designer Vivienne Westwood, actress Emma Thompson, and UK Labour party leader Jeremy Corbyn were also amongst the most vocal in the crowd, with Corbyn stating that "pollution, climate change, inequality, environmental refugees, war refugees, and resource wars" would all be key, touchstone issues in Paris this week.

Peter's indication that the number of people interested in reducing climate change have spotlighted the issue is true across the board, not just on a governmental level. Recently, big business (such as Google, Nike, HSBC, Dell, Swiss Re, Vancity, and more) have pledged themselves to going carbon neutral. Reducing the carbon footprint of worldwide businesses, which are a major contributor to global warming through the release of carbon dioxides (via the burning of fossil fuels: coal, oil, and gas) and typically huge utilisers and wasters of water and electricity, can drastically reduce the climate change spurred on by greenhouse gas emissions.

However, as London's march points out, reducing a carbon footprint even on a personal level can help. People can use smarter cars, compact fluorescent bulbs, learn to recycle, or even just turn down the faucet while brushing teeth. It all adds to a carbon neutral society.

While London has made its stand, the UK has a way to go before it can say its on-par with the leaps being made by Iceland, Norway, New Zealand, and Costa Rica: four countries that are in a race for which can achieve carbon neutrality first. However, big changes can be expected across the board from all countries with representatives at the Climate Summit today. The world eagerly awaits meaningful referendums and active pledges, which cannot come any later than Right Now.