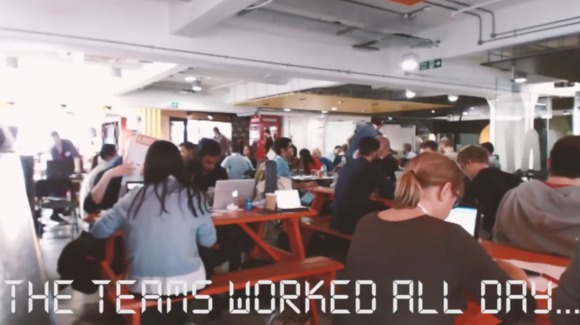 For four years, residents of war-ravaged Syria have had their homes and families torn apart. What's worse is more damage is yet to come. On December 3rd, four British Tornadoes fighter jets hit eastern Syrian oilfields, targeting the Islamic State (IS). Two weeks ago, France also began bombing Raqqa in retaliation of ISIS terror attacks that killed at least 129 people in Paris. Meanwhile, hundreds of thousands of Syrian refugees are pouring over European borders seeking safety and shelter, as opposition escalates around accepting immigrants into Europe and the US.

A Conference Evolves Into A Movement

As political leaders, journalists, and pundits debate about how to best handle the refugee crisis, tech communities across the globe are convening with NGOs and refugee agencies to determine how technology can be used to address the dilemma. This all started with Techfugees, a nonprofit European initiative harnessing the tech savvy and collaborative spirt of technology leaders in London and abroad.

Founded by TechCrunch Editor-At-Large, Mike Butcher, Techfugees launched in October of this year as a two-day conference and hackathon, and has since turned into a movement. During the first Techfugees event, which rallied some of the biggest tech heavyweights in the UK, the community crowdsourced £5,000 for those in the Calais refugee camp, to fun their access to WiFi, and through WiFi, to the world's stage on which their motives and future are being debated.

Since then, tech communities across the globe have taken the idea of and run with it. On November 28th, the first "Techfugees Australia" took place in Sydney. There have also been Techfugee gatherings in Oslo and Poland. Butcher says he and his team are building up to a Techfugees launch in New York soon.

The second Techfugees conference in the UK took place on December 2nd, reconvening the technologists, entrepreneurs, and startups that attended the initial London gathering, as well as volunteers from local European chapters (Oslo, Paris, Berlin, and more), alongside agencies and NGOs that have been working on the ground with refugees for the past decade. Speakers at the event included refugees who have made it to the UK from Syria and Afghanistan, as well as representatives from UNHCR, UNICEF, the National Refugee Welcome Board, British Red Cross, DFID, and other humanitarian experts with experience in the field.

“Initially, we were coming from the technology, startup engineer, and developer community, waving our hands frantically in front of refugee organizations and NGOs and saying, ‘Listen, ‘we’ve got a whole bunch of people who are willing to donate their time and efforts to come up with some ideas around the crisis,” says Butcher. “It was very much about finding our feet as an organization. But what we wanted to do today was firstly engage with all those organizations more deeply, and showcase some decent tech projects addressing the crisis with either applications, mobility, websites or hardware, and that’s what we did.”

Putting The Humanity Into Technology

Mobile and location are proving to be drivers of innovation where the crisis is concerned. During the event, the creators of the Refugee Aid app presented a useful concept around targeting location, where users can broadcast messages. The technology is available today, and could be implemented by refugee agencies tomorrow if the funding came into place.

Mapping projects are frequently being brought into the refugees conversation as well. Butcher says whether or not they prove useful remains to be seen.

One of the most ubiquitous challenges to tackle in this crisis revolves around all the data that needs to be mined: including data from people-trafficking and smuggling networks, to name a few pain points.

"At the other end of the telescope is what happens when they [refugees] get into the country," says Butcher. "How do they get jobs? Skills? Education? How do the kids get to know each other?”

A targeted goal of Techfugees is to develop solutions for helping refugees integrate into society. Additionally, the community is discussing ways human rights abuses at refugee camps can be documented.

Now that Techfugees is finding its footing, the group is planning to continually spotlight the perspectives and ideas from the tech community, NGOS and refugees themselves. In the near future, there will be a publishing element to the initiative. Active participants currently post projects, needs and services on Hackpad, Slack, and Facebook.

“Techfugees is most useful to people is in this convening role, where we can say, ‘These ideas over here are working. These guys needs this, etcetera,” Butcher shares.

The next Techfugees conference will be held in the spring of 2016, with a Digital Storytelling focus.

“We’re going to look at how digital media can be used to help tell the story of the refugees and get the public to empathize with the refugee experience,” says Butcher. “Techfugees sends a positive message. We’re not saying, ‘These people are coming and taking our jobs'. We’re saying these people are coming and going to be integrated into society and contributing to society. Perhaps, they’ll become entrepreneurs. Perhaps they’ll make jobs, and in fact, that’s been the refugee experience worldwide throughout history. So we’ve built a great story about that.”