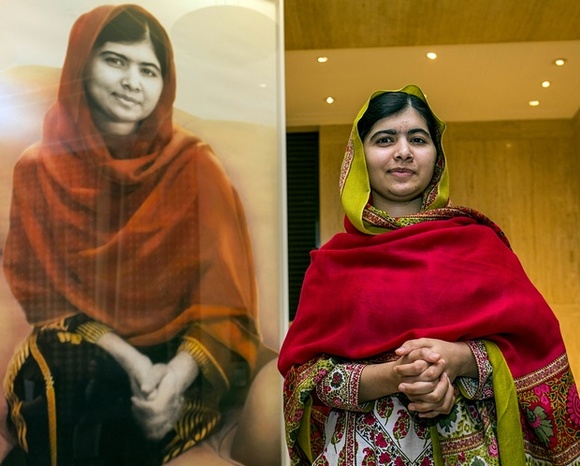 Malala Yousafzai, the young icon for the educational rights of women and girls, has just turned eighteen and enrolled in the UK's Birmingham University. She sees Birmingham as city of "love" and "passion", whose institutions and politics align with her vision for universal education.

Malala, born in 1997 in Mingora, Pakistan, has been an activist since childhood. When the oppressive Taliban regime took hold of her city, she stood in opposition to their ban on sending girls to school, delivering a speech in Peshawar entitled, "How dare the Taliban take away my basic right to education?", and functioning as an on-the-ground BBC blogger, detailing the resistance. She was thirteen then. The following year, the Taliban issued her death warrant, and she was shot in the head on her way home from school: for the audacious crime of bravery in the face of tyranny, and standing against those who would deny her access to knowledge and progress simply for being born a girl.

It would be seven days before she was woke from her medically-induced coma, in the city that saw to the brunt of her medical recovery: Birmingham.

“Birmingham is very special for me because it is here that I found myself alive, seven days after I was shot... It is now my second home, after my beloved Pakistan. The doctors and nurses of this town worked hard to help me recover. The teachers of this town strived to rehabilitate my educational career, and the great people of this city gave me moral support.”

It seems only fitting, then, that esteemed British-Pakistani artist Nasser Azam unveiled his new portrait of Malala at the Barber Institute of Fine Arts, in Birmingham.

The portrait stands three meters tall (nearly ten feet), and painted in oils, shows Malala seated, wearing her headscarf, enigmatic and colourful. Inspired by Malala's story and Azam's subsequent meetings with her in Birmingham, the portrait has a benevolent and welcoming quality. It is organic in its shape, much like Malala's own growth, with a gorgeous sense of movement-- nearly fuzzy, as if her energy simply cannot be contained, even as the cool tones of her skin and hair embody a frankness and a calm among the violent and tumultuous reds of the canvas. The use of negative space helps to propel her into the foreground, as if she might be warmly receiving you into her home-- an apt sort of impression, as its digital representation will be featured in the University of Birmingham's new cutting-edge library, a bastion of education whose space she intends to occupy for years to come.

The scale of the painting was meant to represent her global impact; it was the largest canvass Azam had ever tackled. Of the painting, Azam said he wanted to "convey the feeling that stayed [with him] after [he'd] met her..." which he called "...truly humbling but also inspirational... I found her knowing, calm, welcoming."

Birmangham's state-of-the-art library was opened earlier this year by Malala herself, who greeted her "fellow Brummies" with affability, declaring her pride in being among their meritorious ranks. The portrait itself is bound for the new ITM medical research center in Birmingham, while prints will be sent to the London National Portrait Gallery.

Heralded as an icon, the youngest winner of the Nobel Peace Prize, author of the autobiography I Am Malala, and subject of the new documentary film He Named Me Malala, Azam is quick to point out that Malala is humble despite her achievements, very much grounded in the reality of the situation of girl's education worldwide. Primary school enrollment rates for females in Pakistan is only 29.2% of the eligible population, with the actual attendance rates dipping below that, and nearly 20% less women aged 15-24 are literate than men. Globally speaking, 2/3rds of the world's illiterate people are women. In developing countries, an education can add as much at 10% to someone's expected income per year, and women who have an education are less likely to marry and giving birth young, and more capable of supporting the (often fewer) children they do have.

Malala, who has intimate knowledge of all this, sees the painting as a symbol. "It's more than a painting for me. It's the support that it gives to the education campaign that I stand for... It shows people are standing with me to make sure no child is left out of school. ...We Are Together."

She took the great honour in stride, also noting, "Getting education, getting treatment from the University hospital, and now this portrait in the University of Birmingham, what can be greater?" She went on to add, "I am very thankful to Nasser for his support and for this wonderful painting... I'm praising myself!"

She remarks that the piece makes her "hopeful we will reach our goal of sending every child to school."

And perhaps her own Mona Lisa smile, the hint of quirked lips in the portrait, can be attributed to another facet of an English education: the British sense of humor. Though extremely grateful to the city and the University (and they, to her), she remarks in her West Midlands "Brummie" accent: "Other than the cold weather, I love this place."