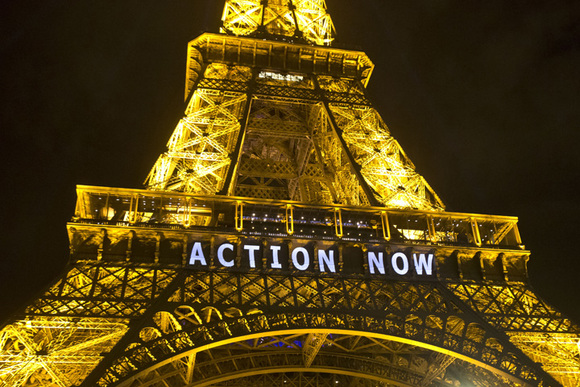 Finally, the world can agree on something. The earth has a fever that needs to be broken, and if it doesn’t go down, our planet will no longer be on the precipice of global catastrophe; it will melt away because action was taken too late.

Thankfully, after weeks of COP21 debates and demonstrations in Paris, a plan of action is in place. On December 12th, nearly 200 countries committed to a global agreement to reduce carbon pollution, in order to keep the earth’s temperature from rising higher than 1.5 degrees C.

With transparency and accountability at its baseline, the Paris Agreement is marking the first time all countries will be required to report on greenhouse gas inventories by source. Additionally, starting in 2020, all nations will be required to share their climate targets every five years.

On a massive spherical rock divided by geopolitical lines and all the messages read in between among 196 countries with different agendas, disparate economies and conflicting policies, this is a major feat. According to the White House, the agreement “moves beyond dividing the world into outdated categories of developed and developing countries and instead directs all parties to prepare, communicate and maintain successive and ambitious nationally determined climate targets.”

Who Needs to Play Part?

In short, everyone. But the heavyweights are in big business. How corporations operate to help uphold the Paris Agreement is a linchpin of ending climate change. That’s why UNCTAD, the United Nations Conference on Trade and Development, established the Sustainable Stock Exchanges Initiative (SSE), a peer-to-peer learning platform, which explores how stock exchanges can collaborate with investors, regulators and companies to promote more socially responsible and sustainable development.

Inaugurated by UN Secretary General Ban Ki-Moon in 2009, the SSE brings together capital market leaders to strategize on how they can support more socially responsible performances among listed companies.

“The objective is to promote what we call the ESGs—environmental, social and governance disclosure,” says James Zhan, UNCTAD’s Director of Investment and Enterprise. “For the platform, it’s not only dialogue. We also come up with research and policy analyses on trends and issues and best practices. Now we are entering the phase of setting up standard guidelines and parameters for stock exchanges to operate.”

On December 7th, members of the SSE— the CEOs of world’s stock exchanges—met in tandem with COP21 to share views on how to move forward. In partnership with PVBLIC Foundation, which collaborates with UNCTAD on its media communication, and keynoted by renowned economist and sustainable development thinker Jeffrey Sachs, the event proved to be educational and thought provoking for all who attended.

“The CEOs here are in a better place to see what’s next for them, because climate change is a big challenge for everybody including them,” says Zhan. “There are two types of expectations for the community. One is that they invest responsibly themselves. Secondly, that they can be the vehicle for promoting sustainable investment worldwide through their platforms.”

Zhan says there are countries where stock exchanges are much more advanced in ESG practices, including India, Brazil, South Africa and Turkey.

“In terms of reporting, they focus on mandatory reporting for all listed companies,” shares Zhan.

As for the most sustainable and responsible companies, Evan Harvey, NADAQ’s Director of Corporate Responsibility, says consumer electronics and technology entities are absolute leaders in the ESG space.

“There’s a built in philosophy of adherence to data and following the data in those companies,” says Harvey. “Also, the economy is transitioning to that digital model. The cloud is actually a warehouse sitting somewhere consuming a lot of power."

Many stock exchanges are listed as companies on their own exchange and have a responsibility to be a good corporate citizen in and of themselves and as a leader. How can they keep pushing forward? Harvey says it all comes down to data.

“Everybody at the meeting agreed there are other things that we can do,” says Harvey. “There’s financial product creation, and exchanges can be a lot more transparent in the way they operate. You’ve gotta start with the company’s data because that’s the DNA of other elements.”

Where Do We Go From Here?

The next UN climate summit will take place in Morocco, and it should make for good dialogue grounds. Karim Hajji, CEO of the Casablanca Stock Exchange (CSE), says Morocco has committed to 52% of its production to come from renewable energy.

“The biggest challenge is that everyone is making having high level commitments, but no action plan,” says Hajji. “The COP21 in Morocco will be about action, and I think the only stake holders that can commit to action are the private companies. Stock exchanges can help by putting together indices for companies which commit to sustainable development and to reporting on their carbon footprint.”

And what’s good for the environment is good for business. While there is a philanthropic and altruistic component to sustainable development, for stock exchanges it’s a business argument.

Harvey says, “There’s an aspect of sustainability that absolutely affects bottom line price and affects revenue. We get revenue from companies that list on the exchange. But if those companies go bankrupt and can’t compete in their sector, then they go away, and that’s expensive for us to contemplate.”

After seeing empirical evidence that man-made CO2 is causing global warming, something we can’t afford to contemplate is that the time for collective climate change action is now.

What immediate action do you want to see taken to save the planet, save money and save the world's integrity?