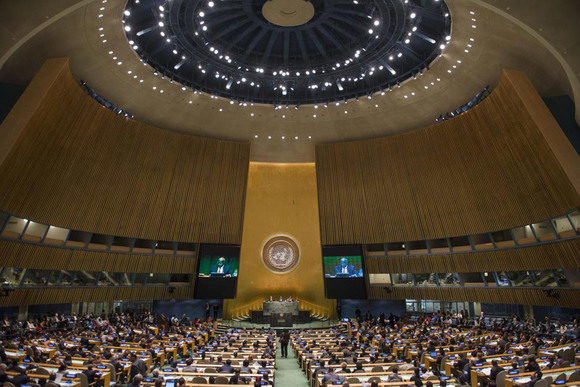 From December 15-16, world leaders, NGO’s, activists and tech trailblazers gathered at the United Nations General Assembly in New York for WSIS+10 (World Summit on the Information Society), a high-level meeting and 10-year review of the progress, gaps and challenges the ICT sector has faced with regard to international development.

The event marked the first time the UN offered a Digital Media Zone (DMZ) for bloggers, media and speakers to convene for interviews and dialogue. Powered by PVBLIC Foundation, the DMZ welcomed guests ranging from cyber security experts, internet freedom advocates, private sector executives and UN directors, all of whom are working to ensure that technology will push the sustainable development goals forward.

TheToolbox.org team was honored to be on-site interviewing speakers and panel participants in the DMZ, which was the brainchild of Dan Thomas, Spokesperson for the President of the United Nations General Assembly, Mogens Lykketoft.

PVBLIC Foundation Chairman and Co-Founder sat down with us to share why having a DMZ is vital for giving the public access to what’s unfolding at the UN.

The digital divide was a hot topic at the event. Taffere Tesfachew, Director of the Division for Africa and Least Developed Countries at UNCTAD says we still have a long way to go, but there has been evidence in the last 10 to 15 years that connectivity is helping people improve their livelihoods.

Twenty-three year-old Deniz Aydin, Policy Fellow for Access Now and the youngest speaker at WSIS+10, stopped by the DMZ to share the needs and concerns of internet users that were surveyed by her organizations in more than 70 countries. Privacy in the digital age, an end to mass surveillance, and the protection of net neutrality were high on their list.

To hear what other WSIS+10 speakers and DMZ guests had to say, check out the Digital Media Zone YouTube channel here.