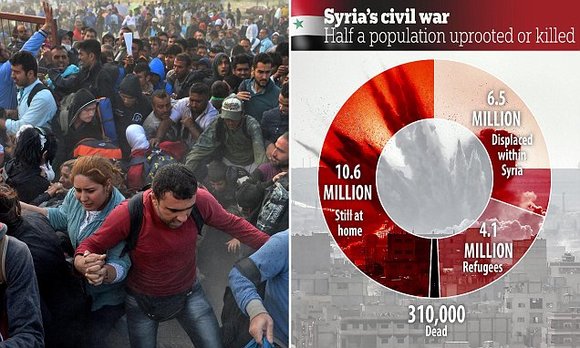 For the first time since October 18th, 2015, the UN has received approval from the Syrian Government to enter the besieged areas of Madaya, Kefraya, and Foah with humanitarian aid convoys, bearing food, medicine, and supplies. It is likely that the voyage will culminate in a number of emergency medical evacuations: the joint UN-ICRC-SARC-led mission in 2015 saw many such evacuations in the months that followed, and according to reports, Madaya is now in even more dire straits. Its people are starving.

Reports from inside the city have indicated that families have been reduced to eating sand and boiling grass for soup to sustain themselves. This is no common level of hunger, even for a war-torn area: Madaya is expressly cut off from supplies by armed actors, blockades, and a halo of landmines surrounding the city. Inside, resources aren't just scarce, they've reached black market pricing. Local reports state that a kilo of rice or flour costs $120, a kilo of sugar is $200, and milk may be going for as high as $300 a liter. Families in normal situations would be hard-pressed to meet this demanding level of inflation, but the majority of families in Madaya face additional displacement, with homes gutted by warfare, jobs that have run dry, no access to banks, and savings that have been used up since the area first came under siege in summer 2015.

Though international law and convention outright prohibits any targeting of civilians in time of war (which should reasonably include starving a city out or holding it captive from aid), the reality of war never plays out to the tune of convention. As the refugee crises has shown us, the everyday citizens of Syria have been the paramount sufferers in this war.

In fifteen main besieged locations that the UN has identified, including Daraya, Deir Ez-Zor, and East Ghouta, it is estimated that nearly 400,000 are critically in need of humanitarian aid. In 2015, only 10% of all UN requests for access were approved; a stark statistic, when the number of civilians suffering escalates each week. In Madaya alone, estimates say that 42,000 people are at immediate risk of starvation.

This month's UN-led envoy will be sent by the World Food Programme (WFP), in partnership with the Syrian Arab Red Crescent and the International Red Cross, with enough supplies to sustain 40,000 people (Madaya's population) over one month's time-- but what happens after?

This is a common narrative in the ongoing Syrian crises. Madaya, 15 miles (25km) northwest of the capital of Damascus, has been war-torn since July of last year. To contain the rebel population, pro-government forces and their Lebanese ally, the Hezbollah, have surrounded the city with blockades and death traps-- making it near-impossible to flee Madaya, but also very difficult to gain access into it. The city itself is also a grid of dangers, many of them buried underfoot, and many others born out of desperation. Along with food, fresh water is now scarce, and electrical lines have been mostly cut or damaged, making daily life in the dead of winter unmanageable. People burn plastic for heat, despite the toxic fumes. Stray animals and family pets have long since disappeared from the landscape, and salt added to water has become an integral and daily meal.

One of the most difficult elements of the crises is that there can be no official confirmation of it. As experts are unable to enter the city, international politics cannot state without any doubt that there is, in fact, a starvation crises. Despite the videos, images, and cries for help pouring out of Madaya and onto the world wide web, very little can be done to take true measure of the scale of this crises. Similar narratives and pleas for aid are breaking out across the country, especially in those areas that were or have been rebel-held.