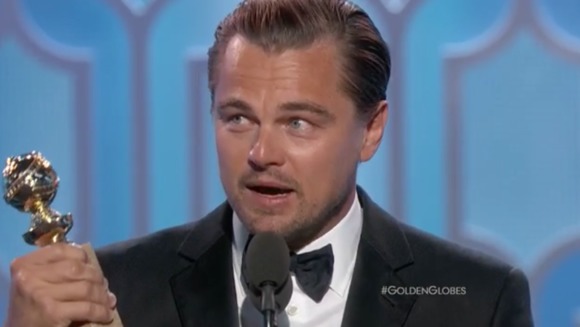 After 11 nominations and two wins in the last 19 years, Leonardo DiCaprio took home his third Best Actor award at the 73rd annual Golden Globes for his portrayal of the historical fur trapper, Hugh Glass, in The Revenant, which swept the ceremony with top accolades. At this stage of his illustrious career and with this many wins, you could think of DiCaprio as Mr. Golden Globes (even though that might sound trite and reductive). But we're going to refer to him as the activist who's using his Hollywood platform to speak up for the rights and respect of indigenous people across the globe.

During his gracious acceptance speech, DiCaprio, who is a long-time environmentalist, paid tribute to the Native Americans represented in The Revenant, as well as indigenous groups across the globe.

I want to share this award with all the first nations people represented in this film and all the indigenous communities around the world. It is time that we recognize your history, and that we protect your indigenous lands from corporate interests and people that are out there to exploit them. It is time that we heard your voice and protected this planet for future generations. ~Leonardo DiCaprio

I don't think Leo's made my heart skip like this since he gazed into that aquarium in Romeo and Juliet.

The Call for Environmental Justice

Indigenous communities are resilient communities, and they possess a reverence for nature that's beyond comparison. And as far as climate change goes, they are hit the hardest, as they depend on natural resources for survival. Despite being in the trenches of environmental meltdown, the ability of indigenous people to adapt to extreme weather and cultivate climate change solutions is unprecedented. Some of the greatest  achievements of these innovators in addressing climate change and working to preserve their land were celebrated at the Equator Prize 2015 ceremony in Paris on December 7, 2015, the height of COP21.

As UNDP Administrator, Helen Clark, said during her opening remarks at the Equator Prize ceremony, “Climate change affects all of us—rich and poor, developed and developing, urban and local. It is truly an all-of-society concern that requires an equally all-of-society approach."

From the scorching temperatures and harsh terrain of Ethiopa to the forests of Belize to the streets of the Democratic Republic of the Congo and beyond, indigenous local communities have strived for decades to save their surroundings and secure land rights. A whopping 1.5 billion people worldwide do not have rights to three quarters of their land— an astonishing statistic DiCaprio is more than likely aware of and was possibly thinking of during his speech at the Globes.

The winners of the Equator Prize are groups of unsung heroes, who have dedicated their lives to restoring and protecting forests and waterways, implementing local climate adaptation strategies, safeguarding land rights and standing up to governments and corporations, regarding the peoples' right to be consulted on development projects that affect their natural habitat.

Tonight, DiCaprio took the golden globe home. For the sake of the ecology of the planet and indigenous communities around the world, let's hope more support and action is taken to help them watch over their homes.