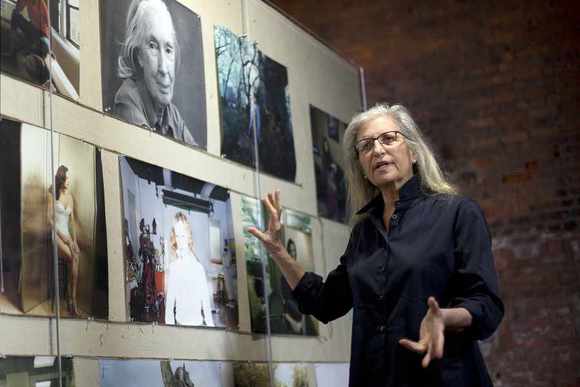 Seminal Rolling Stones and Vogue photographer Annie Leibovitz is telling an anecdote about Las Vegas, where she photographed showgirls in the 90's, at the opening of her new exhibition.

She'd visited Bally's hotel to take full-body shots of dancers in their sequined and feathered regalia. The following day, she returned to do black and white portraits of the same women, outside of costume and no longer "in character"-- only, she couldn't seem to find them. When one of her subjects bumped into her, ready to shoot, she even asked, "Can I help you?"

Annie couldn't recognise them. "They were so normal looking..." When she completed each portraits, she presented them side-by-side, in a collection she called "Showgirls". The differences "ware stark". In the showgirl shot, women were dressed as blazing phoenixes and bangled fortune tellers, baring their torsos and wearing coy, defiant expressions. In the 'everyday' photos, the women looked tedious-- but also real, connective. Lines on their faces, wary eyes, plain boredom, in tank tops and only adorned by the occasion earring or golden cross.

They were the same women, but also they weren't. The transformation fascinated her. "[The photos] represented how it is women dress up to be women."

The idea of women needing to dress the part of being themselves is age-old. However over-the-top the Vegas costumes were (and aren't most things, in Vegas?), a regime of makeup, jewelry, and modish clothing in alluring cuts has evolved along with concepts of femininity to define women through art, on stage, in media. The idea of 'displaying femininity' shapes social norms and aspirations. In the same way, the choice to reject any of the above-- to fail to be whatever the current definition of 'feminine' is-- is also often a very conscious rebellion that women are defined by. Just look at words like 'tomboy', 'dyke', 'unladylike', and 'feminazi', and how liberally they are applied to women with short, coloured haircuts, who wear flannel, who drink beer from the can and don't leave a lipstick stain. This presentation, this painted and crafted version of womanhood, is what inspired her 1999 series "Women" for New York's Corcoran Gallery.

Now, fifteen years in the making, her passion project has a sequel. "WOMEN: New Portraits" tackles what it means to be female in today's world. The photographic series, which includes elements of old and new, famous faces and relative-unknowns, look at what 'female space' and 'female presentation' means today, by testing emotional responses. Does the mother, holding her child protectively in a derelict room, evoke pride and sympathy? Does the photo of Amy Schumer, naked but showing nothing so 'risque' as her natural and copious curves, holding a to-go coffee in one hand, inspire disgust and ire instead? Why?

"WOMEN", the exhibition, will be traveling to 10 cities worldwide, and launches for public view in London Wapping Hydraulic Station this weekend. It's a meticulous and insightful collection, and free to view-- so that it engages and accesses as many people as are curious about it.

One of her favourite shots is of an actress. She brings it along, from her old collection. The sumptuous lines of her body, all soft curves and gentle ennui, would have felt at home as a pose in a Botticelli, and and recalls lounging Greek statues. Less racy than the typical modern magazine cover, it was nonetheless dismissed as "vulgar" when she first produced it, and the actress smeared as tactless. The handling of women's bodies in art is always a good marker of how society views womanhood: can there be such thing as a tasteful nude, the beauty of form, and when does nakedness cross the line into "slutty"?

On the other end of the spectrum was Cindy Sherman, who in a 10-set, barely shows her face. "I want to disappear into the photo...", she'd requested.

When Ellen Degeners posed, she was smoking, holding her breasts, hair slicked back, expression raw, brows giving a sense of akimbo.

Three very different senses of what it once meant to be a woman now sit beside the updated collection, which includes Venus and Serena Williams, Aung San Suu Kyi, and Adele. Marina Abramovic and activist Malala Yousafzai will soon be joining the collection.

Annie tried to shoot in "places that have no identity", so her subject could fill the frame with their own presence. Photography, she says, is a powerful way "to build or translate a message". But when it comes to tackling gender, which she calls, "A big, big subject... very divisive...", she prefers to let the work speak for itself. "It was a subject too big, too broad, I had some concerns on if it would work... it's like going out and photographing the ocean."

So she dove right in, with Caitlyn Jenner. "[It was like] creating a new person, around the idea of what a woman is... what is, who is this new person? ...Extraordinary."

Despite the name of the project, she tries not concern herself with the gender divide. She's focused on what women are, and can do. Unsurprising, the answer seems to be "everything". It sounds robotic, even obvious, but Annie was the first to glamourise female space shuttle workers, while de-glamourising Vegas sex workers. It was not always so obvious, that women could be both. And with the example of Caitlyn Jenner, we are still today pushing and expanding on what gender means, on who owns it, on how it is displayed. If gender is up to the individual to own, as it is in Annie's world, then perhaps she is of a new school of thought, where genders is an independent and fluid attribute, the property of everyone to decide for themselves.

When it comes to her own impressions on being a woman, a single mother of three (two are twins), in the male-dominated world of photography, she laughs. "I don't even know how to wear a dress, and I'm raising three girls. ...Things are getting a little bit more accessible [these days]."

Annie hoped, with her work, to show women as role models and leaders, in the capacity of their daily lives, in any way they wished to present. She didn't want to capture poses, or, ironically, women; she wanted to capture "humans". "It became an unending project... It's an extraordinary list [of women]... I'm very happy with it."

Her work engages reality, without judging it: Bally's shows still sell out, but society looks down upon the showgirls they pay to see. Yet we also shy from the lined faces and unsmiling expressions of normalcy. And maybe, what her work seems to scream, is that women don't care. They occupy every space, and as spaces become more accessible to them to define womanhood, the definition of manhood also becomes more varied, robust, and multi-faceted. "Women need other women. But women also need men."

Perhaps her eldest daughter summed up the point of the project best. "After looking through the book, she called me up and said: When I grow up, I want to be a woman."