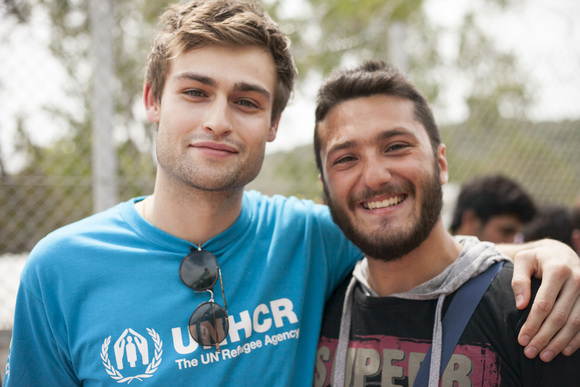 The war engulfing Syria over last five years has displaced nearly 6.6 million people within the country’s borders, with an additional 4.6 million forced to migrate. Facing dire conditions in their homeland: cities without running water, electricity, shelter, food or medical supplies, these people have little hope for a future in Syria until the conflict ends. While UN-led talks to broker a ceasefire at the Peace Conference for Syria commence in Geneva, for many, this measure will come too late. Statelessness is an irrevocable part of their narrative.

Living over 5,000 kilometers away, young British actor Douglas Booth is doing something about it. Douglas rose to prominence through his portrayal of Boy George in Worried About the Boy, and has tackled diverse roles, from narcissist Anthony Marston to tragic romantic, Romeo Montague. Today, his most important role is the one he plays as himself: a UNHCR Supporter.

“I always feel like if I can do something, I should. I can’t live in blind ignorance."

Sitting down with Douglas to discuss how he translates his passion for helping people into actionable change exposed him as sincere, in touch, and earnestly driven. He joked that his affinity for global advocacy must come from his favourite television programme, BBC News 24.

When asked what brought him to UNHCR: “I’m really interested and engaged in current affairs. I think if I wasn’t an actor I’d love to do something in that. I’ve always been very socially aware.”

So far, Douglas has supported UNHCR’s Syria Crisis Appeal and the iBelong campaign, paying a visit to Lesvos, Greece to meet asylum-seekers currently in detainment limbo.

He remarks that often, people live inside a bubble and that if something doesn’t effect them personally it’s trivialised. This attitude can be fundamentally changed to cope with the current crises by translating empathy into action, politically and personally.

“I think everyone would care if they knew the truth. There’s not swarms of people coming over, that’s not the case. Most of these people are displaced under dire circumstances… they go to neighboring countries that don’t have the resources that [Europe] has, creating a high burden... They’re not coming over here to take our jobs. They’re a desperate minority.”

The majority of the 4 million plus Refugees (half of whom are children) have fled to seek asylum in Turkey, Lebanon, Iraq, Jordan, and Egypt. Only 10% of Refugees have gone to Europe.

Refugees generally try to relocate close to home, in the hopes of one day returning. But Syrian Refugees resettled into neighboring countries now face unendurable constraints, as the conflict drags on. They are barred from the labour market, forced to sign over work privileges in exchange for residency. Destitute from years of unemployment, this poverty leads to negative coping mechanisms such as begging, child labour, and child marriage. These exacerbate viral stereotypes of dependency, criminality and cultural inferiority, making it more difficult to settle into a productive life. Education is disrupted for children, University visas are denied to teens, and Refugees (often suffering exhaustion and starvation) are barred enrollment into medical rubrics.

Border countries do not have the resources and infrastructure that many Western countries do. Lebanon, home to 4.5 million, has given refuge to over 1 million asylum-seekers, a 22% population increase. Refugees could be better distributed to deal with the crises humanely.

“Promoting compassion and awareness of what the situation actually is and why this is happening-- It’s quite a big mission."

It’s one that begins at home.

“One of the things I’m most proud of in London is the diversity,” Douglas mentions, beaming. However, diversity grows more problematic for an increasingly wary British public with similar sentiments widespread in the Western world. It’s one of the most difficult issues to tackle when framing the crises: unwelcoming attitudes at home, especially in politics and media.

“The media’s energy [right now] is really xenophobic… I think that many young people don’t know the real facts… I didn’t. Disgusting words like ‘bunch of immigrants’ are being thrown around in the news. Cameron used ‘swarm’...”

The xenophobic rhetoric of the media has amped up over the last few months with French satirical magazine Charlie Hebdo taking the iconic photo of drowned Refugee toddler, Aylan Kurdi, and re-imagining him as an adult sext-offender after the assaults in Cologne.

With Greece barely able to cope with the number of migrants pouring in across the Mediterranean from Turkey on makeshift boats, the EU Interior Ministers have threatened to oust Greece from the Schengen region for its humanitarian measures, while not stepping up to offer enough aid, mobility, and resettlement options to alleviate the influx. In a poll by Focus Magazine, 40% of Germans surveyed want leader Angela Merkel to step down from her post because of her liberal welcome policy towards migrants-- a minority, but billed across media as a condemning figure.

“Ultimately, what people hear on the radio is what registers in the backs of their minds. ...But we have to treat this as what it is: a crisis. We’re in a crisis right now.” So, Douglas contends, we have a responsibility to act. “We have reacted admirably, and generously, compassionately in the past when there have been atrocities,” he says.

Until the war is over, Refugee advocacy groups call on Europe to build better infrastructure to address the crises, including resettlement plans that allow inclusion in labour markets and education. Once Refugees become a settled part of the European landscape, and no longer such an othered concept, the fear-mongering can disperse.

In an article written by Douglas himself for UNHCR, he stresses, “No one chooses to be a refugee. No one hopes for war to find them, for friends and family to die, for their home to be destroyed, their education and plans for their future to be interrupted so brutally.”

They don’t come to steal jobs or University placements. Desperation is the main motivating factor. There is, literally, no other choice for Refugees.

Visit Douglas' page on UNHCR and learn more here. Part two of the interview with Douglas Booth will be out tomorrow, February 4th, 2016, on TheToolbox.org.