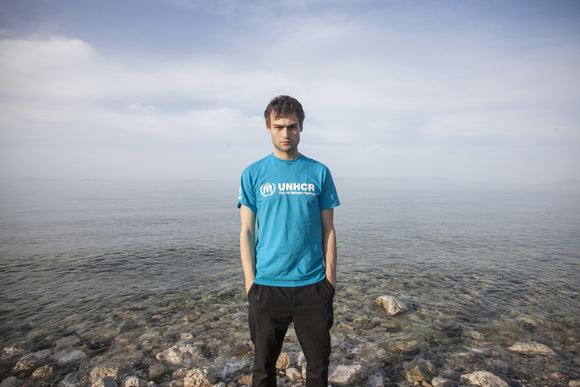 Uncovering the Truth in Lesvos, Greece

Desperation was the scene that met Douglas in earlier 2015, on his visit to Lesvos, a popular port for hundreds of thousands of migrants making the treacherous and often fatal journey across to Greece, in hopes of being registered and resettled.

He called it “The most eye-opening experience of my life.”

The local identification centre in Moria is home to over 1,000 people: and it’s over-capacity.

However, Douglas says it’s not like what you see portrayed in media. “There are no people pushing against walls." There isn’t panic and lawlessness; just confusion and waiting. Douglas arrived sporting a blue UNHCR tee-shirt: a sign, in Lesvos, of someone who can help.

Anxious refugees flocked to him with questions, mostly concerning their rights.

“Almost before a glass of water, they ask for information." They’re terrified—not even sure where they landed, how to claim asylum, or if they will be able to claim asylum elsewhere if they opt to do it in Greece.

“To see people really desperate… it’s intimidating, overwhelming at first… but then you get to know them, laugh with them, get on as friends." The vital process of humanising brings forth the living reminder that these are real individuals, not a generalised group.

“The UNHCR staff on the ground are doing amazing work, and also the medics, Doctors Without Borders… trying to reassure these terrified people about their rights.”

The primary purpose of the UNHCR, is to help protect the rights of Refugees, while resettling and integrating people legally, with the option to return home post-conflict. The organization understands individual national laws, and works to create liaisons between governments to fulfill its mandate to help stateless people. It also provides direly-needed resources such as food and clothing on the ground.

In Lesvos, Douglas had a particular experience that will remain with him. He met a Refugee under the alias name ‘Walter’, a young man close to his own age of 23. He’d fled mandatory conscription into a war he would not kill for, and his family sold off their possessions to buy him a way into Europe.

“[Walter] reminded me of one of my friends from school. ...He has a better degree than me, he’s funnier than I am. He has everything going for him, but the only difference between us is I had the great fortune to be born [in the UK], and he had the grave misfortune to be born into a country now utterly ravaged by civil war.” By the end of their meeting, they were laughing and singing together. “Having this interaction with someone who is actually going through this… on a completely human level, just being there and talking to someone my own age completely opened my eyes to the situation… how fortunate I am to be a British citizen, and how it’s not fair. If every young person in this country had that conversation… they’d think about this situation in a new way.”

They still keep in touch.

Douglas also got a first hand look at the reality of everyday atrocities Refugees face.

When he arrived, he noticed that those waiting to register stood in blinding heat for hours. “There were families out in the sun waiting, with kids, babies… why was there no shade?”

He was told that local cafe owners had donated their deck umbrellas to provide shade. But the umbrellas, branded by a major corporation, had to be removed: as images surfaced of these people taking shelter underneath the company’s logo, the corporation noted it did not want its brand associated with the migrant crisis, and left them in the lurch.

He calls the missed opportunity for humanitarian aid “disgusting.”

Getting Involved At Home

Faced with such a huge dilemma, one where with costly solutions, with mounting xenophobia bearing down the backs of migrants, Douglas’ core message as a Goodwill Ambassador boils down to this:

“We must think, what can I do in this situation to help… right now?”

The answer, he feels, is in engaging young people—promoting awareness in the next generation, who have power as change-makers.

“Young people have the numbers and they need to feel empowered… And we are strong.  People 18-30, think about the amount of votes that is, the amount of noise that is. ...If they have the hunger for it, they can make a difference.”

Social networking, he feels, is a great way of stirring up that noise.

“Social media is extremely powerful and you can’t underplay it. ” Entire movements have exploded around hashtags and the sharing of images like that of little Aylan. Douglas himself is an avowed social media user, with popular Instagram and Twitter accounts, where he is a vocal advocate for Gender Equality and Refugee rights. This more intimate look into his work as a Goodwill Ambassador welcomes others to connect with the experience. “When people feel something, they react.”

As for his own posts, while they attract negative comments, “I do get a lot of positive feedback, a lot of people engaging. I have to feel hopeful, that people are willing to listen and care. ...The biggest thing is to fight ignorance.”

Fighting ignorance has to go beyond empathy, and into collective action, he agrees.

Many are trying. Along with UNHCR, UNICEF has launched a winter coat drive to fend against the brutal winter, Techfugees is looking into ways engineering and technology can alleviate the crises right now, Disaster Tech Lab has gotten on the ground to build WiFi portals for Refugees to contact families, Humans of New York has been giving voices to the voiceless.

UNHCR and Douglas also help to address the other side of the story, often invisible: what happens after Refugees are granted asylum? The rhetoric of criminality, job-stealing, and increased crime is often thrown around to incite fear and close minds and borders. Douglas would like to do a project specifically focusing on young men in the camps: people like himself and Walter. Though he recognises that women and girls are the most at-risk population within Refugee centers, the brunt of stigma is usually placed onto young men.

More can also be done to help Refugees integrate smoothly. One idea is to pair skilled workers with countries that have a need for them: sending doctors, engineers, Professors and their families into nations with need. In 2015 alone, the British NHS hired over 3,000 foreign doctors in a scrambling bid to make up for a shortage at home. These are the solutions we could be creating, solutions for Refugees and Western nations alike.

“Rather than spending millions on dropping bombs... we should spend on education and integration.”

Douglas stressed that his central belief lay in individual people, that they can and will help, when armed with all the facts.

The analogy is simple:

Read Part I of this interview here. Visit Douglas' page on UNHCR to learn more.