March 8th marks International Women's Day. It celebrates the cultural, political, social, and economic achievements of women around the globe, and acknowledges their advancements in every field. The day is also a call to action for accelerated gender parity. Celebrated in many forms since 1909, the theme of this year's Women's Day is deeply relevant to 2016: #PledgeForParity.

With the World Economic Forum moving the dial for the expected date of total gender parity from a prediction of 2095 in 2014, to a prediction of 2133 in 2015, the gender gap is widening beneath our feet. At the current rate of growth, most women alive today won't see the equality they have been pushing for. Moreover, with negative growth on the table, there's good reason to be alarmed. Worldwide, women are less likely to have access to education, more likely to be married young, have fewer leadership roles in government and businesses, and are subject to higher incidences of spousal abuse. The wage gap between men and women has not been bridged in a single country at any point in history.

This year, to further the UN's Sustainable Development Goal #5, International Women's Day is seeking to create parity through active involvement. The site is taking Pledges, asking participants to effect change within their own communities. From valuing the contributions of men and women equally, to calling for more gender-balanced leadership, the pledge list seek to tackle gender inequality across a spectrum of cultures, even in societies where gaps may be difficult to quantify due to unconscious bias.

TheToolbox.org will continue to make headway with our own pledge to the #WomenInFront campaign, highlighting the benefits of female inclusion, while celebrating game-changing women and the programs that support girls and women around the globe. We also look to the #MenBesideUs. As UN Women Ambassador Emma Watson put it, gender equality is only possible if men join the fight. A worthy cause, as gender equality undeniably benefits men too.

Achieving parity is in the interest of all peoples and cultures. Mobilizing, utilizing, and including the voices of 50% of the world population is not only logical, it enables society to tap into a pool of talent that has remained oppressed for too long. Fostering the growth and protecting the health of half our world can only be the right thing. 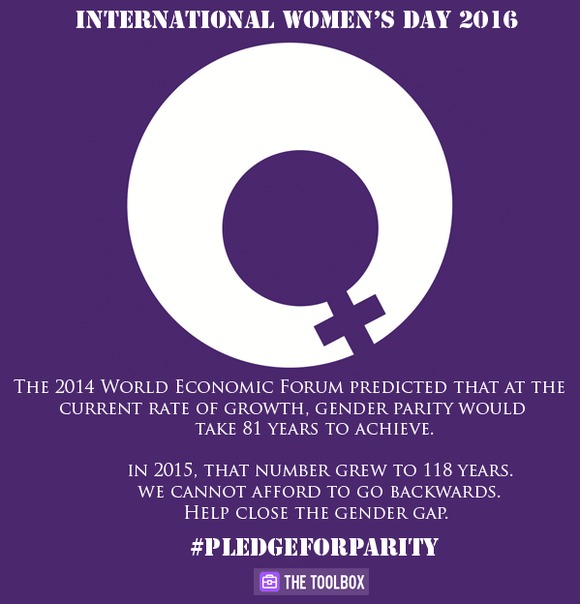