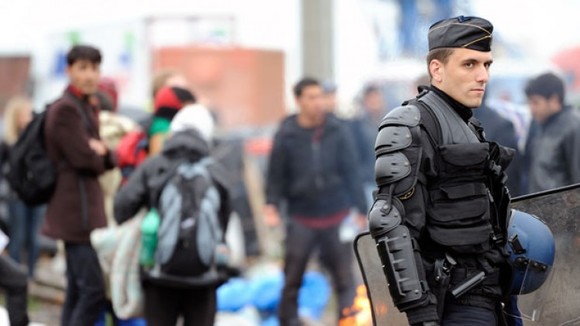 On the last day in February, four hectares of the "Calais Jungle" were cleared by French authorities. "The Jungle" is migrant camp that straddles the Straight of Dover, marking it as an accessible way to reach English shores for hopeful and desperate refugees. The move, which saw between 1,000-1,500 people forcibly relocated, either deeper into the camp or into to state-repurposed shipping containers was highly protested, both by residents and local activists. Equally, many French authorities and European citizens wonder why migrants are unwilling to shift into governmental centers, which offer heightened sanitation and security, and why many of Calais' migrants refuse to declare asylum in France itself.

The answer is fraught and complex.

The Calais Jungle was founded in 2002, after French President Nicolas Sarkozy called for the closure of the Red Cross' Sangatte Camp, which had been operating astride the Port of Calais since 1991. With nowhere to go, migrants flocked to the eastern border of the town, where they lived in squalor until an attempt in 2009 by French authorities to bulldoze the area. The effort, which saw backlash from the international community for inhumane and sloppy execution, culminated in over 100 arrests of migrants. It was largely unsuccessful.

This latest venture to reign in the camp sprouts from sanitation and security concerns. Garbage from the camp, which is not collected often enough, has been piling up too close to a major highway. The partial elimination has been called a "Humanitarian Response" by interior minister Bernard Cazeneuve, who insists that those fleeing war, prosecution, and poverty should not have to live in slum area with limited running water, overflowing waste centers, no heating, and serious sanitation concerns.

Over 6,000 people live in the camp currently- a number which has doubled since September- with more arriving each day. The Calais Jungle swelled as the Syrian crises reached boiling point. However, overcrowding seems to concern migrants less than the new regulatory focus in their lives. Frightened refugees and ardent supports got into clashes with police during the forced eviction from camp homes-- mostly makeshift tents on the ground.

Why The Reluctance?
The reluctance of refugees to shift to new living quarters is born mainly from fear. Given a grace period of a few days to evacuate, many refugees chose to move further into overflowing camp, rather than take authorities up on the offer of converted shipping containers equipped with heating, electricity, and bunk beds. Despite translators hired to explain the benefits of these containers, many remained suspicious.

Refugees are opposed to losing their sense of community. Many have traveled on foot, and after arduous journeys and life in other camps, they are battling a pervasive sense of displacement. With no access to legal work or education, they create communities centers within camps. Tight-knit, these feature help and medical centers, schools, cultural workshops, mosques, and more. Often centered around a certain area, refugees feel that in being forced to split up they are losing the friends, normalcy, and progress they've created.

There is also fear of additional government regulation. The containers feel no different from a detainment center or jail. Curfews may be employed, new procedures may restrict their freedom of choice and movement, and they may even be split up or deported.

Though the French government has described their efforts to install "more water taps, toilets, and rubbish collection services, to clean the site and allow access for emergency services", many refugees see the bulldozing and increased regulation as a means to force them to declare asylum within France itself.

Chief among the reasons refugees are reluctant to declare asylum in France is the time it takes for legal papers to clear: nearly two years, during which they cannot work, enter schools, or apply for medical care. This goes hand in hand with the fear that the application will be rejected, as austerity measures hit French civil-society organizations providing aid to refugees. Rejection means deportation.

Due to the placement of Calais, most migrants within the camp are looking to reach English shores. Many have family within the UK, and wish to be re-united with them. More refugees speak English than French, and see better job and educational prospects for themselves within the UK.

There is also a sense of French racism that refugees shy from. Though they have no experience in the UK, French xenophobia has been on the rise, with incidents of violence and discrimination from an unwelcoming public. Migrants feel that pressure acutely.

Hope remains keystone for them, as they search for a place to restart their lives.

According to the French courts, the camp conditions "expose the migrants... to inhuman or degrading treatment." But they are willing to hold strong through that suffering, in hopes that the UK holds the key to a better future.