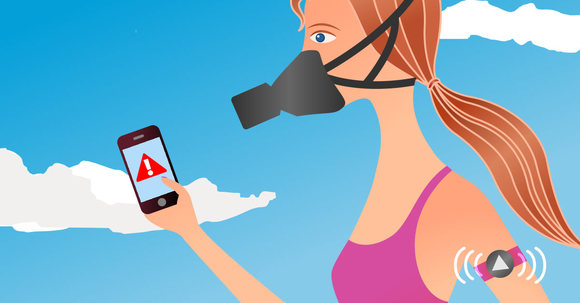 A look at how air quality tech is helping people lead healthier lives.

We breathe in, we breathe out. It’s as certain as the sun rising and setting. The question is, what is it we’re breathing? Suffice it to say, it’s not all good. According to the World Health Organization, indoor and outdoor pollution caused seven million deaths in 2012.

While the globe’s air pollution situation is worsening, technology and data collection tools are advancing. The Israel-based company BreezoMeter gathers and analyzes layers of air quality data down to street level.

“By using proprietary dispersion algorithms that calculate air quality in 323,304,271 geographical data points every hour, we are able to understand how air pollution moves and disperses,” says Lautman. “This is very similar to understanding weather patterns and winds, but at a much higher resolution. Therefore, we’re able to provide highly accurate ambient air quality data in real-time at the highest resolution, and comb it with actionable insights.”

This video demonstrates the kind of pollution movement Lautman is describing.

While air pollution is a universal problem, measuring the oxygen we breathe is often done for personal reasons. More than 50 million people are using BreezoMeter's air quality data worldwide on a daily basis, in order to make informed decisions on their well-being. The company is aiming to reach 1 billion people by next year.

Technology doesn’t get much more personal than wearables. The enviro-tracker is a personalized air-quality monitor from the San Francisco-based startup Tzoa. In the same vein as BreezoMeter, the enviro-tracker app collects local air readings every day. Through this data collection, users are able to track their exposure to pollutants.

By assessing the readings, wearers can monitor their exposure to pollution in the same way they track other statistics like heart rate, steps, and calories. The wearable device connects to the user’s smartphone, while using internal sensors to measure air quality, temperature, humidity, atmospheric pressure, ambient light, and UV (sun) exposure.

Like many of the world’s toughest problems, air quality data can drive social and environmental change if they’re gathered properly, analyzed correctly, and democratized completely. Not only do people using the enviro-tracker app receive real-time information, they help create a crowdsourced map of environmental data for all users. This platform empowers individuals to make informed decisions about where healthiest places to jog, hike, picnic, or engage in any outdoor activity are, based on air quality.

In response to the question of why people should be more engaged in air quality monitoring, Lautman says: “Our air is the last remaining source of livelihood we consume that we don't know anything about. It's absurd because we are breathing 3,000 gallons of it per day. People care more than ever about their water and food. So people should want to know what they are breathing, as well. The information can be used if one is going outdoors. Some use it to check real estate in a certain area, and others want to improve their well-being. Knowledge is power.”

This article was originally published on Cisco.