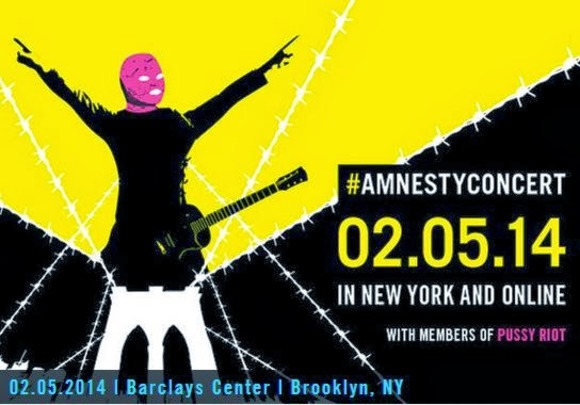 Last night, Amnesty International “brought Human Rights home” down the street from The Toolbox headquarters in Brooklyn. Activists, human rights defenders, former prisoners of conscience, and famous musicians came together at a benefit concert where the words “inspiration for change, “be unreasonable,” and “a dream you dream together is a reality” rung through the crowd.

Whether the crowd was dancing to Blondie or heard Pussy Riot’s declarations through social media channels, re-engagement of the current global human rights movement were inescapable.

It was Amnesty International’s first concert for the cause in 16 years. More than four hours of music including Flaming Lips, Tegan & Sara, The Fray, Imagine Dragons, and Blondie were at the forefront. Young artists came to the stage introduced by human rights abuse survivors, and video interludes called for the next generation to keep fighting for change.

Special guests, Pussy Riot’s two freed members, Nadia and Masha, shared their views on the current situation in Russia, reminding U.S. residents that we are lucky to live in a country where we can speak our minds. They added that Americans need to “keep their eyes open.”

Testimonials from people incarcerated for more than 20 years were interspersed throughout the music sets. These included one man jailed for 'homosexuality' when he was working at a bar in his 20s. Another wrongly incarcerated victim quoted Yoko Ono before the audience had an inkling was going to appear on stage and said, “A dream you dream alone is only a dream. A dream you dream together is reality.” After Iranian once-jailed blogger Kianoosh Sanjari voiced that women are second-class citizens in his country, Blondie hit the stage with a powerful performance.

Between sets played by Lauryn Hill and other performers, Amnesty broadcasted excerpts from past benefit concerts Bono and others played over the years. Fellow rock n’ roll stars such as Sting talked about passing the torch, and our founder Peter Gabriel explained his philosophies and experiences which established him as the Human Rights activist and leader he is today.

High spirits celebrating the past decades of collective human rights progress turned serious when Nadya and Masha took the stage to focus on activism -- not music. They reflected on how many activists are still in dark cells, and explained that they are here to spread the voices of those silenced by injustice.

The punk rocker’s release is a leading example of how a collective voice can make change. In July 2013, Adele, U2, Madonna, Yoko Ono, Radiohead, Patti Smith, Bruce Springsteen, Ke$ha, Sir Paul McCartney, and Sting united with more than 100 musicians to call for the release of Pussy Riot. In total, over 220,000 actions have been taken through Amnesty International USA on the punk rockers’ behalf.

Last night they left the stage not as musicians, but as brave human rights defenders with a serious call to action. In their own words: