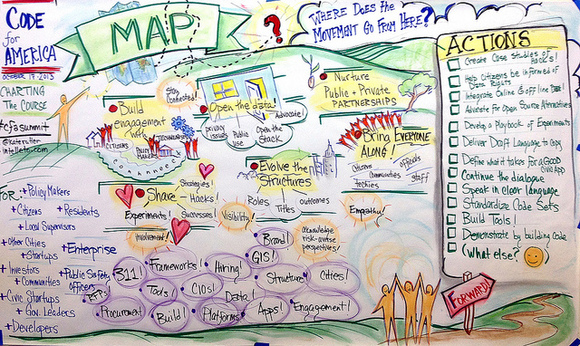 Since Code for America's inaugural year in 2011, 28 municipal governments have participated in the (CfA) Fellowship Program. Last year, officials from 80+ cities attended the annual CfA summit in San Francisco, when the Code for America civic innovation community gathers in person for three days of collaborating, connecting and learning.

One of the main things that these municipal governments have in common is their willingness to innovate. Many have Chief Innovation Officers, who are charged with translating ideas of government innovation including open data initiatives, which are developed to identify better ways to use technology and spark the kind of citizen engagement that leads to action.

For all of the cities that have embraced the Code for America ideal of open data and transparency there are numerous governments that haven’t. But why?

Historically, government is not known for innovation. Bureaucratic red tape, antiquated IT systems, and a “why bother” mentality are often cited as reasons for a government’s apathy toward innovation. In other words, change is hard. But it’s not impossible.

Governments that have taken a forward-thinking approach to solving city problems have champions inside city hall. They have the support of executive leadership, departmental stakeholders, and usually a mid-level advocate that is committed to making the open data initiative a success and cutting the bureaucratic red tape. They have determined the best way to make data accessible given their current IT systems, and they have made sure that all key stakeholders are informed of the benefits of open data.

There is also a strong correlation between interested and involved citizens and an innovative government – i.e., champions outside of city hall. For example, the Open Chattanooga CfA Brigade was a driving force behind Chattanooga’s open data commitment and one of the many brigades championing open and transparent government. Code for America Brigades work with local government and volunteers to hold regular civic hack nights and events. From there, they share their work with the Brigade Network consisting of 126 local brigades across the globe.

The prospect of open government is daunting

Another reason many municipalities have yet to embrace the open data movement is the fact that releasing and maintaining the data can be a daunting task. Cities have hundreds of datasets, and there are a lot of steps to take before releasing each one. So, open government advocacy groups stress the importance of keeping it simple.

Rather than trying to release every dataset at once, smart cities have prioritized by releasing data that is readily available, shown success in other cities, and is most useful to citizens. Kansas City, MO, for example, goes straight to the public and asks them to vote on the data that they’d most like to see.

Other successful cities like Boston, Louisville, and Chicago continually reevaluate the datasets and add more data as their programs develop.

What’s next for Open Government?

The good news is that as the pioneering smart cities find success in their open data programs, others are jumping on the bandwagon and utilizing the resources provided by Code for America and other organizations. San Diego City Council approved an open data policy in July that was spearheaded by Open San Diego, a CfA Brigade. Minneapolis also passed an open data policy in July, and it too received input from the local CfA Brigade, Open Twin Cities.

To find out more about joining or starting a Code for America Brigade in your city, click here.