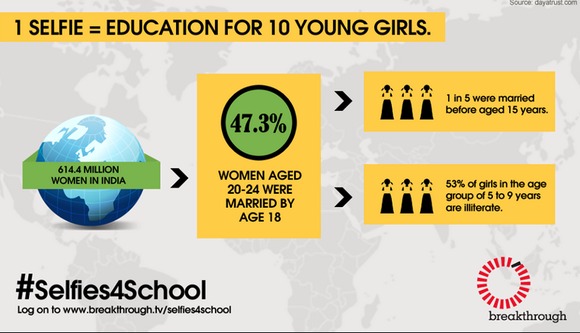 Today, The Toolbox is highlighting instances of social good from around the world ranging from Amnesty International's Citizen Evidence Lab for human rights researchers to a back to school campaign using selfies to help end chid marriage.

The Citizen Evidence Lab is a project launched by Amnesty International that compiles resources and authentication techniques to help support human rights defenders and researchers in their search for discerning what is real and fake in the world of citizen media. One tool, the Youtube Data Viewer, helps to quickly extract hidden data from Youtube videos, which is useful in tracking down the source of the original content.

What if your selfie could send 10 girls to school? Breakthrough, a nonprofit using the power of media to fight gender-based violence, has recently teamed up with the Vodaphone Foundation to launch the #Selfies4School campaign with the goal of keeping 25,000 girls in school and out of child marriage. To date, the campaign has helped 14,310 girls return to school safely this year. So before you log into Facebook today, upload and share your selfie here.

As the war in Gaza and protests in Ferguson lose viral traction, WITNESS, an international organization, highlights the importance of safety and security when filming human rights abuses on the ground. An Activist's Guide to Archiving is a step by step guide showing activists how to most effectively use their video to bring about justice after filming. The Guide teaches activists and citizen journalists how to safeguard and preserve important contextual information in their videos so the video could be potentially used to bring justice in a court of law.

What: Bringing apptivists and technologists together to discuss technology for social good.

Who: Hosted by Mashable

What: A two-day conference examining the impact of technology and new media on social good.

Have any Toolbox tips? Sound off here in the comments section or e-mail us at info@thetoolbox.org!