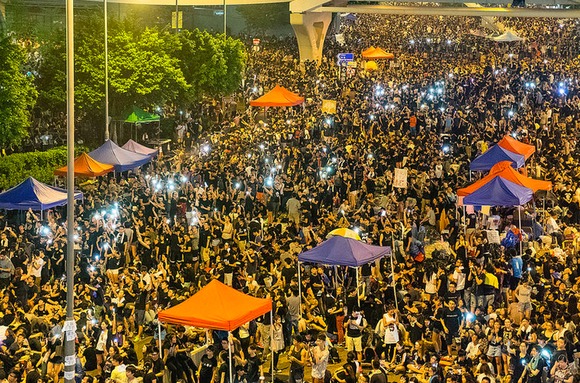 Tensions between the Hong Kong police and pro-democracy activists in Hong Kong are continuing to boil, as the two opposing forces battle for control of an underpass outside the government’s headquarters. On Wednesday, 45 protestors involved in what’s been dubbed as the “Umbrella Revolution” were arrested, while the police used pepper spray on anyone who resisted. This incident happened on the heels of public outrage over video footage of police officers allegedly beating a hand-cuffed protestor.

What triggered the turmoil? In 2007, China promised Hong Kong residents they would have the right to democratically elect their top leader in 2017. However, the government reneged on this promise in August, announcing that candidates would have to be approved by a pro-Beijing committee. Not so democratic. Near the end of September, what started as a student led, pro-democracy protest turned into massive chaos in the streets. When members of an advocacy group called Occupy Central launched a “civil disobedience” campaign during the protests, the activists grew in number and occupied the forecourt of Hong Kong’s city government headquarters. This move was met with strong opposing force from authorities, similar to that of the militarized police in Ferguson, MO. Incensed by the action of the police, a number of Hong Kong residents joined the protestors. A couple of days later the police tear-gassed the area.

Wall Street Journal columnist, Jeff Yang, has been following the Hong Kong protests closely and recently spoke about the event on CNN. He says the violence that's flooded the city is uncharacteristic of Hong Kong.

“The reason why the protests swelled to such a size initially is because the reaction of the authorities was so harsh and unexpected,” says Yang. “The brutality of the response was unprecedented. Tear gas against student protestors? Hong Kong just doesn't have that kind of history. A lot of the demonstrators were there to protest the action of the police.”

In a recent piece he wrote for CNN Opinion, Yang highlights the role technology is playing in the Hong Kong protests. Between livestreams, social media, drone footage, and mobile apps, the Umbrella Revolution is a tech-powered movement in the making. The hacktivist group Code4HK has built an online hub to help activists organize and monitor protests. Meanwhile, an app called FireChat, which was created by Open Garden, has been instrumental for protestors, as it allows users to send and receive messages without mobile reception or the internet.

Open Garden Chief Marketing Officer, Christophe Daligault, says he did not expect FireChat to be used for protests, and that it was meant to be a proof of concept peer-to-peer networking technology. The app jumped in the top 10 social networking apps in 115 countries within 10 days of it’s launch in March. During the first week of protests in Hong Kong, FireChat was downloaded 460,000 times.

“People asked us, ‘what do you mean by you can chat off-the-grid? Would it work on a plane for instance?’” shared Daligault. “The answer is yes. If you are completely off the grid, you need density of people and devices. This is how it works: the range from device A to device B is 40-70 meters, If you have more people or devices around, the messages will hop from one device to the next. The devices form a daisy chain. As they do that, they are extending the range of the network. The more people use it, the better the network is. In situations when you have a lot of people in the same place, such as a sports venue or Occupy Central in Hong Kong, cellular networks get congested, but FireChat works really well then.”

Here’s a video of a student in Hong Kong explaining how protestors use FireChat when cellular networks are congested.


As new processes and tools are activated during protests, more people are empowered to come together and raise their voices against injustice. But how and when can technology be more than a tool? When will it be a solution?

“FireChat was an example of short game tech,” says Yang. “It was a response to rumors that the authorities were going to shut down or block cell transmissions. But the real power of tech to disrupt authoritarian government is in the long game: social media, wikified archives, digital samizdat. The world was rocked by the 24/7 view of the protests in Tiananmen, which were broadcast by CNN until the authorities shut the cameras down. Well, we're now in an era where the cameras can never be fully shut down.”

In terms of privacy, professionalism, and social currency, modern society's habit of always being on and always being connected has its downfalls at times. However, when it comes to pro-democracy protests, perhaps it's the key to unlocking justice.