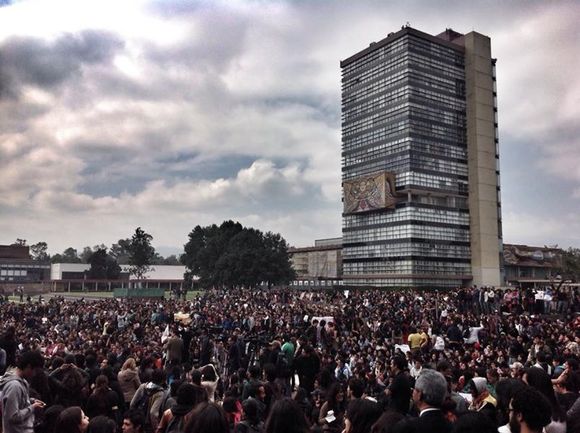 History is repeating itself in the Mexican state of Guerrero, where activists and students are being terrorized by police for rallying in protests over the disappearance of 43 students. On September 26th, the now missing Normalista students from Ayotzinapa, a school where young progressives learn to become teachers in rural areas, went to Iguala to commemorate the Tlatelolco massacre of October 2nd, 1968, in which hundreds of protesters died when soldiers opened fire on a student pro-democracy demonstration.

When the Ayotzinapa students arrived at Iguala to demonstrate, police opened fire, killing six students, wounding many, and abducting 43. Shortly after the incident occurred, mass graves were found in the outskirts of Iguala, containing badly burned and dismembered bodies.

A friend from the region, the first to alert me about the massacre of the students, explains that many believe these bodies are the students, but forensic evidence cannot be used to prove it since the bodies are so disfigured.

“Nine more graves have been found and the numbers are coinciding," he shared. "These actions are nothing new for the government.”

Twenty-two police members were arrested after the massacre. To date, about 50 people have been arrested in relation to the students’ disappearance. However, little has been done by the state to find the students, and police brutality continues to be rampant in the southern states. The fact that that these massacres are not a rare event and that the government doesn’t give an explanation for them is alarming. This has inspired mass resistance around the country and actions in solidarity around the world.

Following the massacre, demonstrations of over 15,000 students and activists took place in the capital and cities around the country. On October 2nd, thousands marched in cities around Mexico to commemorate the Tlatelolco massacre and to demand the return of the missing Ayotzinapa students.

The country’s current violent situation is reminiscent of Mexico’s Dirty War of the 1960s and 70s, which was marked by a strong backlash against the student movement. This era in Latin America saw many “dirty wars,” in which citizens demonstrating political opposition were taken by dictators’ state armies and where mass graves of activists were later found.

The National and International Response

Two weeks have passed since the massacre, and community demonstrators in Mexico City, Guadalajara, Berlin, Paris, Montreal, Madrid, and many other cities around the globe are rallying to demand that the 43 disappeared students be found. In this video from a recent Mexico City demonstration activists speak their minds.

Beyond the international protests, students have taken to burning down government offices enraged by the lack of information about the students massacred by police. Additionally, students around the world have launched this #43ConVidaYa social media video campaign to demand justice for the 43 missing Mexican students.

In recent years, Human Rights Watch has documented increased human rights abuses toward journalists and activists in the country. The director of Amnesty International opined that many more immediate steps should have been taken to find the missing students.

“The coming days provide a vital window to establish what really went on and these sensitive investigations must be performed by those at the highest, federal level, including with the support of international forensic experts already assisting investigators,” said Erika Guevara Rosas, Americas Director, Amnesty International.

Those involved and and touched by the event have said that now in certain regions of the country, “It is more dangerous to be a student in Mexico than a narco trafficker.” Many say this is because drug cartels control the officials or because they are the government officials themselves.

Another source says that students in Guerrero from the private University Tecnologico de Monterrey, including two European students, were chased into a gas station bathroom while being shot at by police.

The Tools To Use

So how can this injustice be stopped? There are tools for aiding activists and citizen journalists in situations like this. Check out the apps on the right side of this post to get the realities behind your movement and demands to the public. CrowdVoice, Stringwire, and other mobile recording tools featured here have been successful tools in reporting on human rights abuses around the world.

If there are any tools you'd like to suggest, please sound off in our comments section.