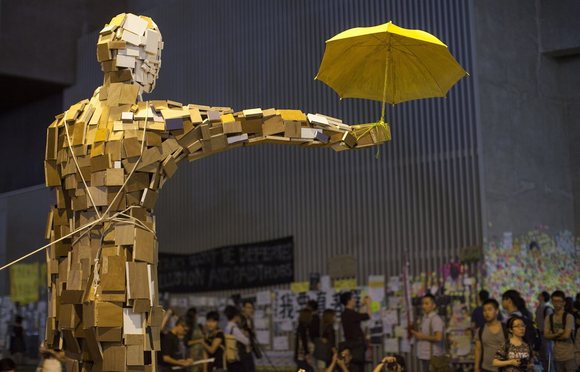 As part of The Toolbox's coverage of tools that are being used to help protestors in Hong Kong, Ferguson, and other movements around the world, we're spotlighting CrowdVoice, one of the first citizen journalist media platforms to curate underreported human rights stories. CrowdVoice is one of the many disruptive projects of the MidEast Youth Network developed by our featured Apptivist Esra’a Al Shafei.

As I was looking up CrowdVoice’s feed of curated media from Occupy Central, I came across human rights topics that span the globe—from workers rights in Bangladesh to the crisis in the Ukraine to the Disappeared in Mexico. The topical feeds include stats, infographics, and national and international news sources in languages native to the regions, along with citizen mobile photos and videos.

I caught up with CrowdVoice editor, Melissa Tyas, to get some insight on their coverage of Hong Kong and other protests. Here's what she had to say.

TB: Who can contribute to CrowdVoice media feeds? Any user who signs up? I see that the feed pulls in main news sources such as Reuters, not just citizen media- how is this feed curated?

MT: Because CrowdVoice relies on crowdsourcing, the platform is open to contributions from all visitors to the site. Anyone can contribute to a feed by adding an article, picture or video. Additionally, a content aggregator automatically pulls postings from across social media into the feed based on a set of keywords or hashtags, where they await in a moderation cue for verification and approval (also crowdsourced). Users must sign up to create a new “voice” or topic on the site.

TB: Is CrowdVoice curated more for the movement and its activists, or is it meant to also inform people following protests internationally?

MT: We believe that free access to information, particularly well-organized information, is paramount to the traction and success of social movements. CrowdVoice is certainly designed with the needs of activists in mind, but also strives to make the nuances of these movements accessible and understandable from an outsider’s point-of-view. That’s why we feel interactive features like timelines and infographics are so important: they help to shed light on the reasons behind the movements, and put on-the-ground events into perspective.

The variety of languages of the material on the platform, as well as sources, develops organically based on crowdsourcing. Of course, we have some trusted sources we prefer like reputable media outlets and local NGOs, and are always careful to exclude state media.

TB: How does CrowdVoice differ from other citizen journalist media tools? Was it one of the first media platforms of its kind?

MT: CrowdVoice was founded in 2010, before the Arab Spring, and was inspired by the difficulties faced by activists in organizing the plethora of information regarding their causes. CrowdVoice’s contextualizing features and the breadth of information available on the platform, from major media to citizen video, sets it apart from similar tools. We’re constantly striving to keep the platform relevant, innovative, and most importantly, useful to social movements.

TB: I'm very impressed that you cover so many underreported human rights issues and movements. I see that you even have a feed about the FARC. How do you pick your topics?

MT: CrowdVoice has team members across the world who are very in tune with movements in their regions. We try to have a range of topics that represent major conflicts such as the war in Syria and the Islamic State, as well as movements that are underreported, or have dropped off the radar of major media, like workers’ rights violations in Bangladesh.

Our Disappeared infographic went up last week.  We find CrowdVoice’s features to be most impactful when they are immediately available. We had a live timeline of events from Israel’s offensive in Gaza this past summer that was very well-received.

TB: What have you found to be most notable about CrowdVoice's use in Occupy Central? Have you seen any videos or heard of any specific cases that stood out to you?

MT: It has been challenging to exclude state media from the Occupy Central feed in particular. But it’s interesting to observe the differences in citizen video and firsthand accounts versus the way events are being spun by Beijing and CCTV.  Occupy Central so far has been really inspiring in the peacefulness and dedication of its participants, and has done an amazing job of using art to tell its story.

Are there under-reported conflicts in your region? If so, check out CrowdVoice here, and join the citizen journalism revolution.