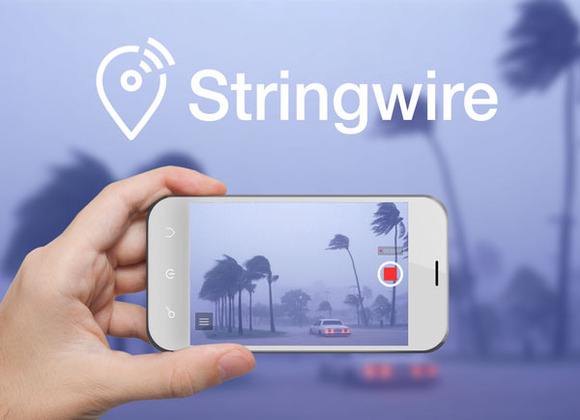 Graphic photos of war, incidents of racism, militarized police, and the killing of journalists are just a handful of the images desensitizing the American public. In some cases, such pictures and videos instigate action among people so disturbed by what they're seeing that they can't help but raise their voices. But in most media saturated circles, complacency and borderline apathy seems to be the common sentiment. This is not only detrimental to the collective consciousness of modern society, it's harmful to the global economy and ties among countries, to say the least. So what's the answer? More in-depth news? (We've tried that.) More real-time distribution of news? (That's been helping.) There's no shortage of tools delivering information as events happen. But this doesn't always trigger emotion or urgency. What can bring some level of empathy to consumers of the news?

Phil Groman, founder of the live video streaming tool Stringwire, is betting on crowdsourced citizen journalism as a solution.

"It’s very likely that the stories that we’re reading about are actually affecting people a lot like us," says Groman. "They may be students or they may be a similar age group to us or they may have similar interests, but we just don’t 'get' the story. We don’t have this empathetic connection. So my whole project with Stringwire was really started as an exploration of creating an empathy engine for the news."

The most recent Stringwire live streams have been coming from Ferguson, as protestors there await the grand jury's decision on whether or not to indict police officer, Darren Wilson, in the shooting of Michael Brown.

Still in beta, Stringwire launched earlier this fall. Groman says the service was built specifically for news organizations to source and verify user-generated content, which is the main differentiator between Stringwire and other streaming platforms, such as Ustream and Livestream. There are a number of tools built into the Stringwire system that allow news networks to verify the content in real-time. There's also a location feature alongside the video that’s streamed from the app. In addition to these features, Stringwire has a dashboard that supports multiple inputs and curators to pick and choose the best footage. That's not all. The more responsible of a user you are, the better your reputation is on the platform.

"If you’re a new user you don’t have the same reputation as someone who’s been streaming the whole time from Ferguson," says Groman. "We’re really hoping to build this [Stringwire] into a fully automated reputation system, whereby those users that are more responsible with the product have a better standing. For example, if the police tell them to move, they move. They don't stream infringed material. The quality of the video is strong. They know the difference between landscape and portrait etcetera."

Last year, NBC News acquired Stringwire, giving the network full ownership of the software and the brand. However, this does not mean NBC Universal owns any of the content that comes in through the Stringwire live streams. Stringwire has advocated a Creative Commons license around the material that's streamed to the platform, which is a radical way of doing things for a large organization like NBC Universal. All content streamed through Stingwire is owned by the creator, who gives license for anyone to use the footage as long as that creator and Stringwire are credited.

The Stringwire app is currently available on iOS in Australia, Canada, Guinea-Bissau, Hong Kong, India, Ireland, Israel, Liberia, New Zealand, Nigeria, Sierra Leone, South Africa, UK, Ukraine and the U.S. It's available for in Android in all of the aforementioned countries except Liberia and Sierra Leone.

"Part of our focus is on citizen journalism for breaking news that everyone is interested in," share Groman. "But my belief is that our platform is more important for the stories that aren’t getting any coverage. So it’s a chance for citizens that are embedded in stories that are not getting any attention to get some video out and get noticed by other media outlets."

To view some Stringwire videos, check out the service's YouTube channel here.