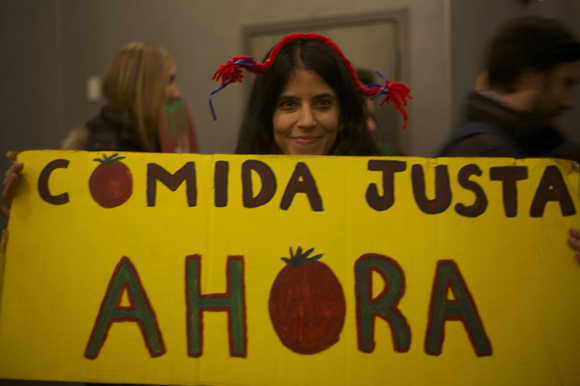 ‘The farmworker justice movement is a sub-movement of an ongoing human rights and civil rights movement," said Schlosser.


Directed by Sanjay Rawal and produced by Schlosser, Smriti Keshari and Eva Langoria, "Food Chains" shares a message of hope and overcoming the odds, as it chronicles the story of farmworkers in Immokalee, FL, home to one of America's worst cases of modern slavery.

Following the screening at the Quad Cinema, several farmworkers' rights organizations held a candlelight vigil to protest Wendy's refusal to adopt the Fair Food program, which ensures fair pay and treatment of farmworkers.

As the film shows, California and Florida are among the worst offenders when it comes to the conditions of farmworkers. In the renowned region of Napa, while the lush valley is high in wine production, housing prices are much too high for the poorly paid farmworkers. One farmworker featured in the film says he sleeps on an old mattress by the river after working all day. Another tomato picker in Immokalee explains that most people can’t stand the work because it’s so hot. He added that he and the other workers don’t start getting paid until they fill the first bucket of tomatoes.

We're not talking about the situation a century or decade ago. This is a reality for many hard-working immigrants and second-generation Americans in our country. "Food Chains" paints a picture of the struggle for farmworkers' rights with exclusive archival footage delineating the slavery and exploitation of cheap labor since the turn of the 20th century. 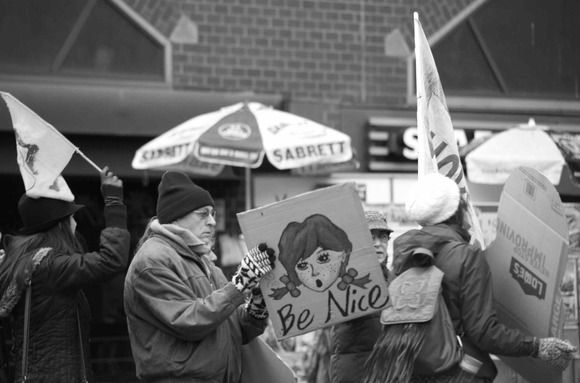 Why Should I Care?

The food justice movement is a sub-movement in the struggle for equality, which we are all connected to, as long as injustice and exploitation in our food chain continue to exist.

Sometimes it takes a strong reminder, a catalyst, to personally connect to a larger issue. As the daughter of a farmer and immigrant, I grew up seeing migrant strawberry pickers hustle to pick the crop. Although I’d helped food service workers organize and unionize throughout college, I'd never fully realized this essential point of connection until Eric Schlosser introduced the film.

Since we all eat, can't we care enough to make a difference?

To be against slavery, we need to be against consuming products made with unjust labor, and not support the multi-billion dollar establishments (supermarkets) that distribute them. We must demand fair prices that trickle down to the farmers and the farmworkers. 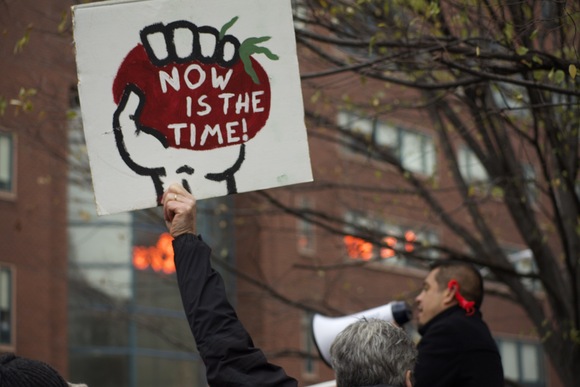 CIW And Their Impact

Among those in attendance at the screening was Gerardo Reyes Chavez, a member of the Coalition of Immokalee Workers (CIW), whose fight to create a fair food nation has served as an inspiration. In September 2014, the group was honored with the Global Citizen Award at the Global Clinton Initiative.

In the Q&A following the premiere, Gerardo Chavez shared some important insight with the audience. 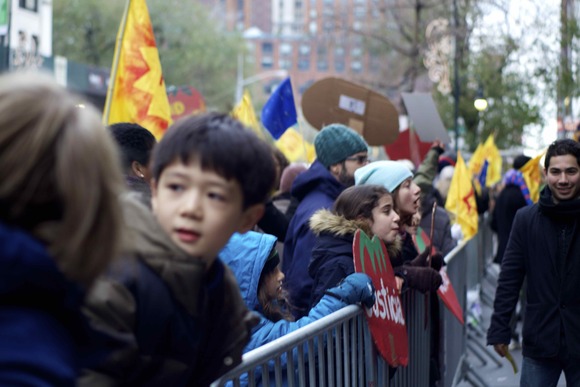 That’s what is especially unique about "Food Chains." The struggle isn’t over, and you can get involved and help make a difference.

1. Pressure the Corporations: A few huge companies haven’t listened to the CIW's request to adopt fair working conditions. These companies spend millions on their image, and they don’t want it soiled. So tweet @Wendys and @Publix, asking them to support fair wages and treatment of our farmworkers.

Sample Tweet: After the premiere of #FoodChains, we ask @Wendys: Why not back human rights for farmworkers? 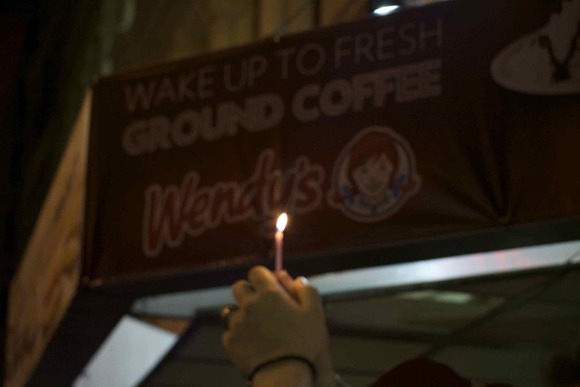 2. Buying Power: Want to practice what you tweet? We have apps for that!

Support companies that support fair labor by using our tools, which can be found on the right side of this post. 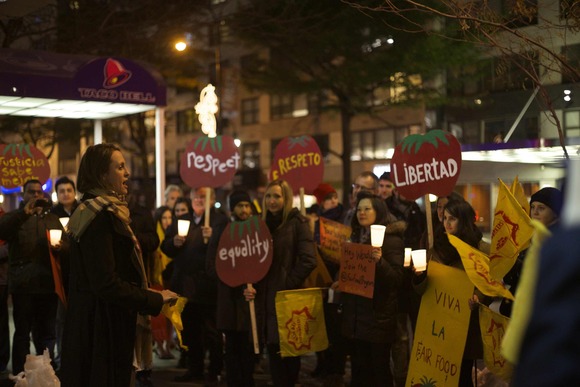 See the film, pledge for the cause, or join an action campaign in your area. 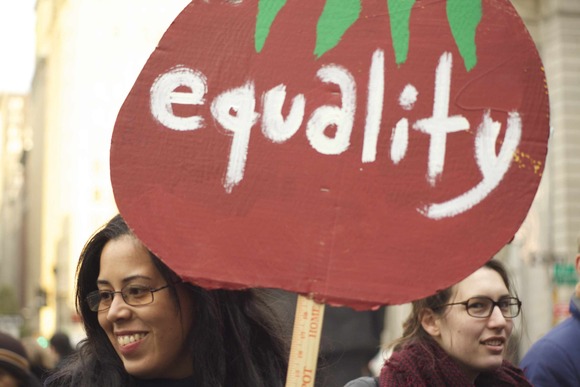 More Photos From The Opening Weekend Of "Food Chains" 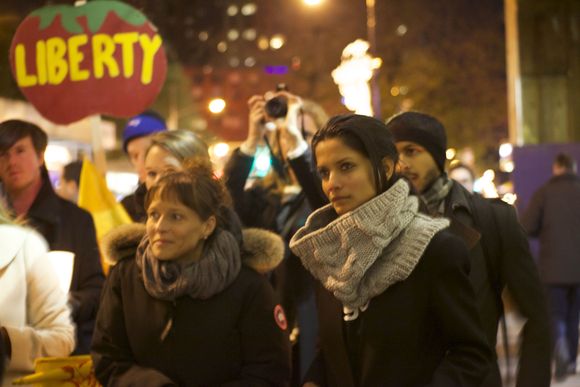 Above right: Producer Smriti Keshari, a first-time feature documentary filmmaker, takes part in the action, along with her cinematographer and other members of the Food Chains crew. 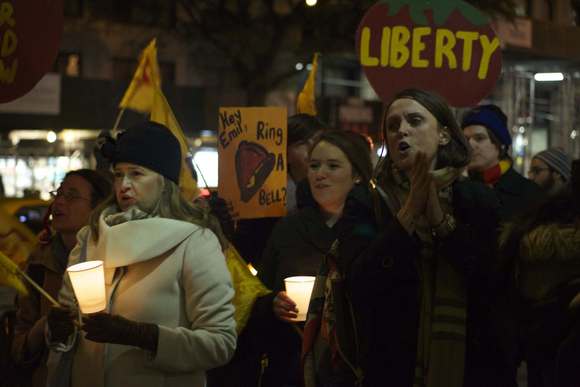 The Crowd Chanting When Wendy's Managers Refuse To Speak 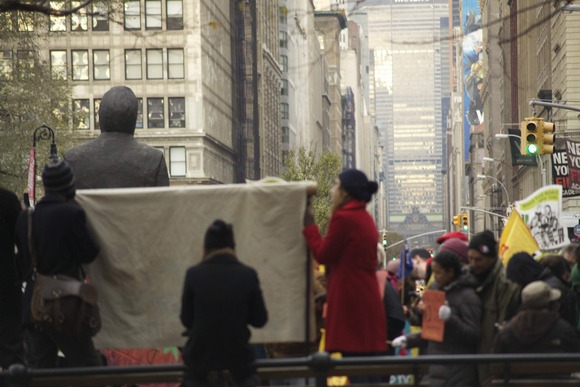 All photos from Food Chain's Friday and Saturday’s actions by Monica Wise. @MonicaWise01