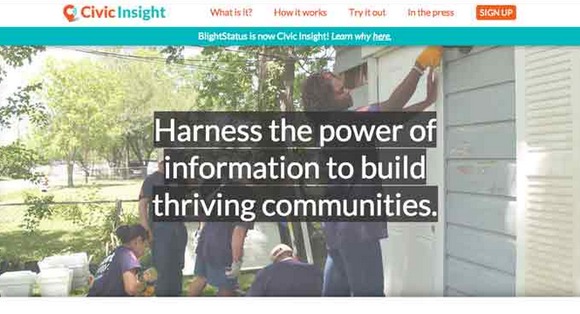 Open Data is a buzzword in government organizations, as most major cities have published at least some of their data online, and local governments across the country are launching open data initiatives. But it’s important to realize that open data is not necessarily helpful data. In it’s raw form, data is virtually meaningless to most citizens.

To make their data useful, cities are turning to civic tech startups to translate raw data into useful information. One such company started as a Code for America project.

When the Code for America Fellowship team arrived in New Orleans in 2012, they were tasked with creating a public records system to track the status of over 35,000 vacant (or blighted) properties. Within 6 months, Blight Status was born, giving residents an easy way to identify blighted properties and track what officials are doing about them.

After their fellowship concluded, three of the fellows turned the project into a full-fledged company. Civic Insight, as it’s now known, makes official information about buildings and construction projects – including civic processes like permitting and licensing – available to the public in an easy-to-use interface.

Co-founder and CEO, Eddie Tejada, has big plans for Civic Insight. “Our technology is maturing quickly and we've learned a great deal about how we could automate our technology even further,” he said, “so I am excited to continue to grow and launch in cities across the country.”

Civic Insight most recently launched in Dallas after a partnership was formed between City Hall and civic organizations including the Dallas Area Habitat for Humanity. Dallas Habitat wanted to use property data  – information like appraisal data, code enforcement, and fire and police activity – to determine where to make their next investment, but the data wasn’t readily available.

Recognizing the need for other organizations and the public to have access to that same information they were seeking, Dallas Habitat worked with City Hall to publish the data.

At the 2014 Code for America Summit, Dallas Area Habitat for Humanity CEO Bill Hall described the challenge of turning raw data into something useful to the public. “First, we wanted the community to have the data,” he explained, “but we needed a way for the community to use it and implement it and understand it.”

That’s when they commissioned Civic Insight, who is turning the data into simple, clear language and visualizations.

While the current website features an interactive mapping and monitoring tool of code violations, it will eventually integrate the additional information (crime activity, building permits, etc.) that Habitat was originally seeking, making it a one-stop shop for information on the overall health of a neighborhood.

“We ultimately want a high level understanding of the cascading impact that new building has on a neighborhood,” explained Tejada. “We want to make it easy to understand how Dallas’s neighborhoods are changing over time.”