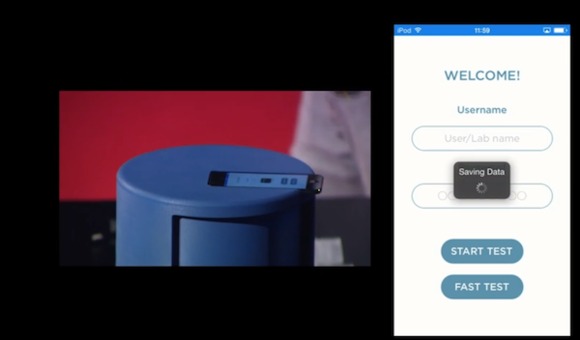 Microbiologists and data scientists around the world are beginning to test out a device called a Miriam, a simple, non-invasive way to easily detect cancer and other disease patterns in a person's microRNA. Mexico City-based engineer Jorge Soto, the founder of the biotechnology start-up MirOculus, is the mastermind behind the technology. He says the Miriam requires less staff and medical training than other cancer detection devices. Additionally, the Miriam only costs $500 and can replace expensive equipment and high level technicians.

According to MirOculus, the major challenges of cancer disease are (i) early detection, (ii) improved patient stratification and (iii) therapy response prediction. The company's improvements in these areas hold promise to result in a more favorable disease outcome for the patients, especially in affordable, regular testing and early detection.

Here's how it works. With a single blood test the patient provides on a plate, the Miriam device sends microRNA to the MirOculus app to test the sample against other abnormalities in the database.

When I asked Soto if the technology would be available over the counter, he laughed and said, “You probably wouldn’t want a cancer detecting app in your living room to pull out at dinner parties, right?” Good point.

Soto says that the tech may one day be available to all of us, but that the intention is for the Miriam to replace expensive technology and unnecessary technicians. He is starting to introduce MirOculus technology to hospitals and research facilities in the U.S., Europe, and Mexico, while continuing to test the product. He is also testing how the same detection system works with Alzheimer’s and depression, as there is research that shows microRNA can test irregularities in mental health diseases.

At Matilde University, a study is being conducted on the brains of people that have committed suicide. Soto used this example to show that MirOculus detects not only the presence of specific patterns in mircroRNA, but can show how levels of those microRNAs can be over-regulated and indicate an increased level of expression. That said, one specific mircroRNA that is over-expressed can identify people with depression.

So what's in store for the future of MirOculus and the Miriam?

"By the end of this year, we'll have a new version of the device that won't use a smartphone app anymore, and instead we'll integrate that function into the machine,” says Soto.

He added that he wants to have citizens involved in the evolution of the tool.

"We are thinking of ways to involve citizens and their needs," Soto shares. "We really want it to be very open and accelerate this [process]. We are figuring out ways to do this with the FDA. They want to be on a large scale and [pass] the regulation processes to be accessible to more patients around the world."