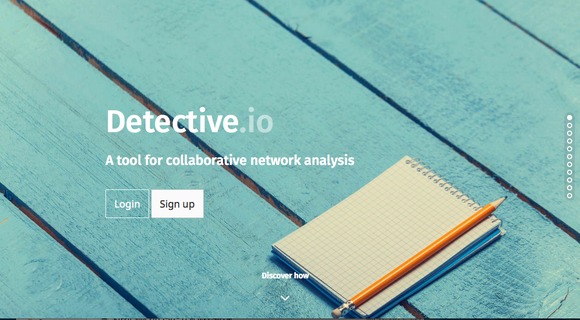 Nicolas Kayser-Bril is a self-taught journalist and developer who pioneered the concept of data-driven journalism in continental Europe. He created Detective.io and the Data Journalism Handbook. Detective.io is a tool for collaborative network analysis desinged to help journalists explore and edit connections in their collected data in seconds.

The Toolbox caught up with journalistic Apptivist and asked him a few questions about the state of journalism during a turbulent time for international reporters.

Detective.io launched publicly recently. What's the response been? Do you know how many users you have? Are they mainly journalists?

Nicolas: The response has been very positive. As we hoped, people who had no knowledge of network analysis now understand how they can benefit from it and start using it in their daily job.

We tripled our user base since we launched. Users are mainly journalists, but we're seeing a growing interest from consultants in the IT and security sectors.

How important is it for journalists to be skilled in data visuailzation these days? Is it the future of journalism?

Nicolas: The way content is consumed has changed tremendously in the past 15 years. Content can be split in micro-chuncks and consumed on any kind of display: computer screen, smartphone, Facebook update etc. Any information professional needs to know how to get his or her message across to the right audience, and that includes mastering datavisualization, which is a powerful way of delivering a message rapidly. It's just one of many, however. It will not replace text, video or pictures.

Are there any recent examples of Detective.io being used to uncover corruption that you can share?

Nicolas: Our users launched data collections on the public administration of cities in Brazil, on police violence in different European cities, on the connections between think-tanks in a European country, on the links between political parties and their donors and more. None of these investigations is public as of now.

Can you explain how the Belarus network was created?

Nicolas: Together with journalists from Belarus, Poland, Lithuania and Russia, we set out to uncover the links within the Belarussian elite. Using mostly open sources (e.g business registries, social network updates, news archives etc.) we were able to have a very precise picture of who owned what and who commanded whom in Belarus. The investigation was published in French, English, Russian, Belarussian and Lithuanian last October.