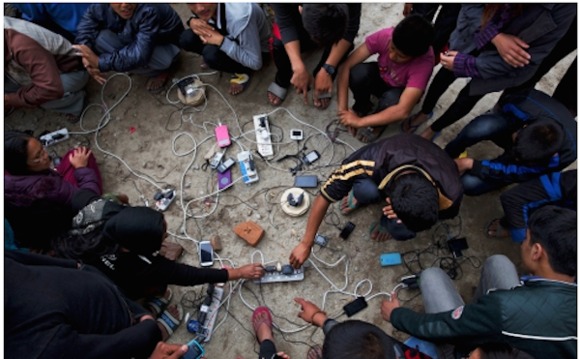 On Monday, the world watched in heartbreaking disbelief as a 7.2 tremor rattled the quake-struck nation of Nepal. Although it was only one fifth of the potency of the 7.8 quake experienced just weeks before, the second tremor was the cause of dozens of deaths and casualties, as well as fractured temples and ruined landmarks. The epicenter of the 7.2 quake was near Mount Everest, east of Kathmandu. This time people as far as northern India and Bangladesh felt it rock the earth. Reports and fear of avalanches and continued aftershocks had many residents once again sleeping in the streets and open areas, taking recovery efforts back to day one.

Amidst all this chaos, devastation, and reports of sluggish government aid, the use of technology has continued to be a driving force for ongoing relief efforts.

After Facebook and Google launched people finder apps, thousands in affected areas were able to connect with loved ones. Local and major communication networks provided free access to calls, messages, and Internet use for days after the earthquakes.This immediate access to technology has also made it easy for people to donate money to SMS-based fundraising campaigns.

Crowd-sourced databases have given users the ability to both facilitate searches for missing residents and determine how on-the-ground volunteers and communities give and receive aid. In remote areas, groups of humanitarians, mappers, and relief workers have gathered to manage their own relief efforts.

The Yellow House is an example of one of these pop-up aid groups. After starting a Facebook page called Himalayan Disaster Relief Volunteer Group to announce their location and efforts, many flocked to join the growing group of travelers, photographers, journalists and doctors. Using Kathmandu Living lab’s open-source crowdmapping site, volunteers have been able to create up-to-date geographical information and terrain mapping.

Nama Budhathoki, founder of this open-source nonprofit, went onto further build out quakemaps.org as a database for real-time response information. The site has gained so much traffic due to its effectiveness that government operations that other relief aid volunteers are now turning to it to see which villages have received aid and specifically what aid is still needed.

Once again access to technology has made a tremendous impact and has given way to many stories of compassion, as a nation’s people turn to one another to begin healing.

To see more tools for aiding the Nepal earthquake and disaster preparedness, check out The Toolbox’s collection of curated tools here.