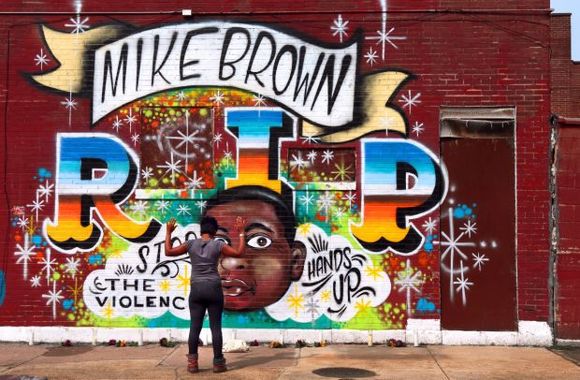 What a difference a year makes…sometimes. A year after the killing of Michael Brown, an unarmed 18-year-old black man who was shot in Ferguson, MO by a white 28-year-old police officer named Darren Wilson, many people are asking if anything has changed and what Ferguson has taught us.

On Sunday, Brown’s father Michael Brown Sr., led a march in Ferguson where hundreds of people gathered to take a collective moment of silence to commemorate the life of his son. Before the march took place he thanked supporters for not allowing what happened to be "swept under the carpet."

One thing is certain. Amid the tragedy of Brown’s death, something that had been swept under the carpet for far too long was brought to the surface—a new conversation about racism in America. And it transpired in a day and age when anyone with an internet connection can participate.

What’s The Web Got To Do With It?

When the news broke that Brown was killed on August 9, 2014, the whole world watched as tensions in the already racially charged town grew, and a militarized police force stood at odds with protestors who took to the streets raising their voices against social injustice. Residents on the ground and onlookers across the web shared their views on the shooting and race relations in the country using the hashtags #BlackLivesMatter and #AllLivestMatters. Citizen journalists streamed live videos of demonstrations night after night as Ferguson began to take on the shape of a modern war zone with tear gas permeating the air.

Finally, when US Attorney General Eric Holder announced that Wilson would not be prosecuted, riots set Ferguson ablaze and flamed the media frenzy. And then...ambiguity continued to rear its head.

Four months after shooting Brown, Wilson resigned from the Ferguson Police Department. He told the St. Louis Post-Dispatch he was leaving his position at his “own free will” after the police department received threats of violence if he stayed.

Violence cannot be quelled by more violence. Threats are not the answer to creating peace. So what is the answer?

In the information age, data’s got everything to do with it. Just as people are using the internet to share their own views, sightings, videos and reports on crime and current events, they can stay informed using different tools and through harnessing data.

According to MappingPoliceViolence.org, 195 black Americans have been killed by police in 2015. The team behind the site collects information from public, crowdsourced databases including FatalEncounters.org, the US Police Shootings Database and KillbyPolice.net. They are proof that something has to change.

As for a legal agenda, there may be no such thing as a silver bullet piece of legislation. But clear demands have been made. For several months, the federal government has been called upon to establish a consistent methodology for collecting data around police killings. Gathering and monitoring this kind of data is imperative for justice, because as everyone knows numbers tells stories and can keep groups accountable to someone else besides themselves.

But back to what Ferguson has taught us. The anniversary of Brown’s death spawned the hashtag #FergusonTaughtMe, which was trending on Twitter on Sunday. Here are some highlights from the conversation.