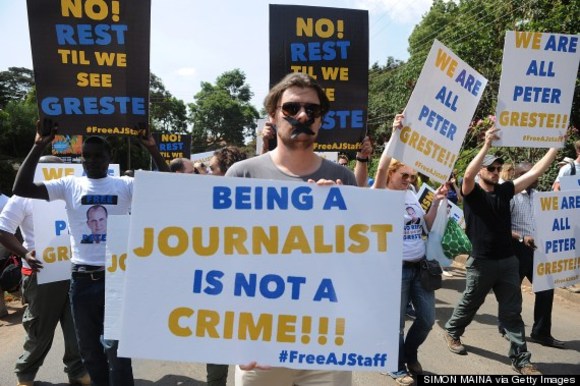 Something exquisitely tragic happens when power and politics bind the hands and mouths of journalists. A lifeline between all sides of the truth and the eyes of those who care enough to look for them is stabbed and left for dead. Or maybe just wounded. I hope.

On August  29, an Egyptian court sentenced Al Jazeera journalists Baher Mohamed, Mohamed Fahmy and Peter Greste to three years in prison for allegedly collaborating with a terrorist group, known as the Muslim Brotherhood, to broadcast "false news" that endangered national security. However, there’s something missing from this ostensible conspiracy—proof. According to Amnesty International, of which team members observed all of the trial’s 13 sessions since 2013, "the prosecution failed to produce a single shred of solid evidence.”

The Guardian, which was also present during each of the trial’s sessions, reported that the prosecutors used videos and recordings taken from the defendants’ hard drives and phones to prove their wrongdoing. None of the material had any correlation to Egypt or Al-Jazeera.

The items presented included footage of a trotting horses by Sky News Arabia, a BBC documentary about Somalia, a song by the Australian musician Gotye, a show about sheep farming, a Kenyan press conference, and photos of Greste’s family. It doesn’t take a lawyer to see that the aforementioned pieces of media show nothing other than the defendants’ taste in arts and entertainment.

For the sake of the Al Jazeera journalists and media freedom in Egypt at large, Amnesty International is working to resuscitate the lifeline between the truth and truth seekers. Philip Luther, director for the Middle East and North Africa at Amnesty International, has spoken publicly about his views on the case.

“This is a farcical verdict which strikes at the heart of freedom of expression in Egypt,” said Luther. The charges against Mohamed Fahmy, Peter Greste and Baher Mohamed were always baseless and politicized, and they should never have been arrested and tried in the first place.”

Luther added that the journalists should be allowed to walk free without conditions. “We consider them to be prisoners of conscience, jailed solely for exercising their right to freedom of expression,” he said.

After the verdict was announced, Amal Clooney, who represented Fahmy expressed her disappointment. The verdict "sends a message that journalists can be locked up for simply doing their job, for telling the truth and reporting the news," she said. ”And it sends a dangerous message that there are judges in Egypt who will allow their courts to become instruments of political repression and propaganda.”

Clooney added that Egyptian President Sisi could potentially grant a pardon. During an interview with BBC, she said she’s pushing for this to happen because that would mean that the conviction would be reversed, and it would be recognized that the journalists didn’t commit a crime.

Are There Tools To Help Us Take Action?

While we don’t have tools that can give us an inside looks into court rooms, we do have technology that can help us stay informed as citizens, citizen journalists and citizens who support journalists. Here are a few.

ObscuraCam: In a world of viral videos and facial recognition, ObscuraCam, which was created by The Guardian Project, helps you share photos and videos while protecting the privacy of you and those you care about. With ObscuraCam you can blur and disguise faces in your photos and videos. Information that could identify you as the cameraperson is removed from the files for added security.

Humanitarian Tracker:  Humanitarian Tracker is a forum that connects and empowers citizens around the world by giving them a voice to tell their story. It offers tools, methods, and training by which citizen journalists can share reports of what they witness on the ground about human rights violations, conflicts or disasters.

What apps and resources should we add to this list?
comments powered by Disqus