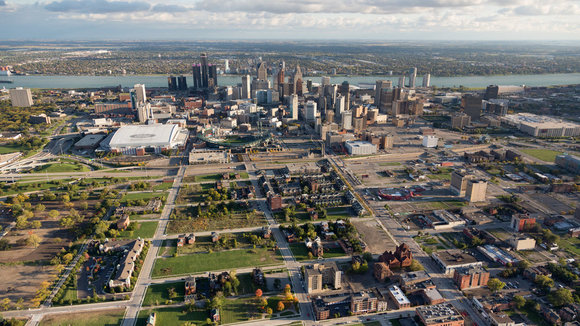 Growing up an hour and a half outside of Detroit I had feared the city for most of my childhood, primarily because of what I saw on the news. When I took trips there I ran in and out in the blink of an eye, not looking sideways, never taking any time to see what the city had to offer.

And then I began going there as an adult and meeting local entrepreneurs working to raise the collective human condition of their town. That was when everything changed. That was when it became clear that despite the fact that Detroit had gone from once being the wealthiest city in America to being the largest city to file for bankruptcy in America, it could someday rise again.

My last visit to the D was on a muggy day this past August. The city exuded a calm character against a drastically divided backdrop—one of economic development and progress in some areas and dilapidated houses and blight just a few miles away. While I saw great disparities blanketing the landscape in post bankruptcy recovery, I also felt the openness, warmth, and spirit of the people in the streets and the local shops. This is always disarming, considering 18% of the population was unemployed as of two years ago, 39% is living below the poverty line, 40% go without internet access, and thousands of people there are consistently in jeopardy of having their water shut off.

Meanwhile, some are adamant that Detroit is making a comeback. Thanks to Dan Gilbert’s Rock Ventures, which is investing in real estate and creating jobs in downtown Detroit, this area is fertile ground for investors and budding entrepreneurs, and providing a home to a burgeoning tech startup ecosystem, including incubators such as TechStars Mobility and the Detroit Labs Apprentice Program.

A new Detroit is indeed happening. But what about the old one? A number of Detroiters believe that before a full economic recovery can be achieved, Detroit needs to focus on the current gap that exists between its own residents.

The Need for Digital Inclusion Across Neighborhoods

After a day of talking to business owners  in the Eastern Market, I drove a few miles to the neighborhood of Morningside to meet with community activist, Monique Tate, a woman so full of knowledge about Detroit she could create a college curriculum on the city. Upon greeting me at a cafe on Mack Avenue, she began giving me a lay of the land—the neighborhood’s parameters resources and lack there of. The need for digital inclusion is at the forefront of Morningside’s issues.

She and fellow members of the Detroit Digital Justice Coalition are leading efforts to build a wireless “mesh” network, a community controlled communications infrastructure that can distribute internet access to the entire neighborhood. The project is in its infancy and Tate is currently looking to secure more participants and wifi transmission equipment.

An hour later, we got in the car and drove through the Morningside neighborhood. Tate pointed out different houses, some that had been built by Habitat for Humanity, some that were fully kept and beautiful and others that had been left during the housing crisis. The abandoned houses we passed weren't surprising. Neither were the remnants of burned down homes. What was startling was the border between Detroit and it’s neighboring city Gross Point Park, where 15 giant flower planters stood marking a one-way entry point between the two areas. Talk about a landscape of disparities.

“What’s the best way to get the resources you need?”I asked.

“In community, those of us who are involved must continue to knock on every door and talk to everyone, or at the very least encourage all people we know to be involved in their neighborhood,”said Tate. “This leads to getting involved with external groups that provides community resources and information, and  ultimately leads to our interaction with city officials and agencies and the expectation from them is transparency and truth.”

The Power Of Data-Driven Development And Local Insights

Speaking of transparency, Tate is currently working with Data Driven Detroit (D3), which serves as a leading voice in open data across Michigan and provides data analysis to strengthen communities, on a Morningside mapping project. No stranger to the importance of digital inclusion, D3 adds layers of additional meaning to data by bringing in neighborhood level datasets that don’t often see the light of day.

D3 Director, Erica Raleigh, says data not only tells us where a city has been, it can give residents hope for where the city can go.

“Detroit was once a great empire, and we can see that in the numbers,”says Raleigh. “We can see that we have the bones for that hopeful future going forward. Also, data gives us the opportunity to see in general, ‘oh, that was a tiny little uptick there. How great is that!  Let’s do more of that.’And it can also give you that feeling in your heart that things are going to be ok. As bleak as some of the numbers are for Detroit, there are always brights spots. There are always things coming out in the numbers that you just didn’t expect to see.”

Among one of its many data initiatives, D3 collaborated with Motor City Mapping to collect high-quality up-to-date data on properties in Detroit to inform a blight elimination plan by the Blight Removal Task Force. To determine how the city can improve the quality of life for the highest number of people and enhance investment opportunities for reinvestment in Detroit’s neighborhoods, D3 created the Maximizing Community Impact (MCI) tool, which identifies Detroit geographies that are at a “tipping point,” or neighborhoods where immediate intervention could have the greatest impact.

Morningside is at a tipping point. “Without continued effort toward community engagement, increasing occupancy and economic development, we can go the other way,” says Tate.

Raleigh says that in order for technology to play an effective and sustainable role in Detroit, the intimidation factor needs to be lowered. She adds that economic recovery efforts need to come from inside the city and beyond.

“We need to make sure things are easy to use and make sure we’re actually listening to our residents and all of our citizens, instead of trying to tell them what they need,” shares Raleigh. “Overall, when you look at the regional picture for metro Detroit we have to fix it at a regional level or it’s not going to work,” shares Raleigh. “And because safety and blights and abandoned buildings are so intertwined with the regional choices that we make, I don’t know that it’s fixable without regional collaboration.”

There is no lack of people within Detroit’s neighborhoods who want to collaborate. April Boyle, Executive Director of Build Institute, a network of grass-roots programs that train people to bring their business ideas to life, says more attention and investment needs go to into community entrepreneurship. To date, Build has graduated 600 aspiring and experienced community entrepreneurs. Build fosters growth for what they call Main Street entrepreneurs— brick and mortars or mom and pop lifestyle passion businesses—that are looking to open businesses in their community.

“We need both the investment paid to tech and high-growth companies but we also need to foster and nurture the community and Main Street entrepreneurs to keep the wealth, to keep our culture, and to preserve Detroit as a unique place,” says Boyle. “The respect for the small business community or the work that we’re doing at that cross section of community entrepreneurship and economic development doesn’t get the respect it deserves because people measure success in dollars, and they don’t understand that this problem took 50 years. It may take hopefully not as long because we don’t have that long to wait, but it’s going to take a long while in order to have that pipeline of workers, and  talented,  bright innovative workers have to start somewhere.”

Rico Razo, who serves as the Director of Neighborhood Engagement in District 6 for the Office of Mayor Mike DugganFounders, echoes this sentiment.

“If you lived outside the city and just read articles about "Detroit's Comeback" you would swear it isn't a city that's 84% African American,”says Rico Razo, who serves as the Director of Neighborhood Engagement in District 6 for the Office of Mayor Mike DugganFounders. “A lot of times investors are quick to back people who have relocated to Detroit because they heard it's the trendy place to be, but I say don't sleep on the ones who have stayed and weathered the storm during the darkest days in Detroit. When more businesses who have been around a long time feel like they are also being supported and are part of Detroit's ‘Comeback Story,’ that's when the city will be in a good place.”

So what’s it going to take for collaborative efforts in rebuilding Detroit to be sustainable?

“You have to be intentionally inclusive and everything you do has to be through that lens of social justice and equity and opportunity, and if it's not then you will be unintentionally exclusive,” adds Boyle. “Those are the only two choices.”

In Detroit, where a Tale of Two Cities (The New Detroit and The Old Detroit) has run rampant over the years, the two choices Boyle describes are right on point.