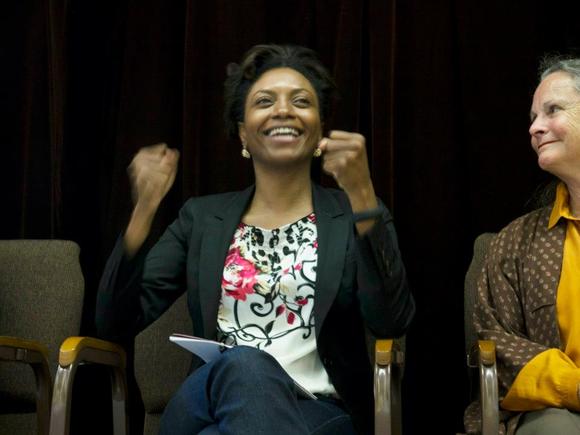 When Toni went to a dinner party in 2008, she didn’t know what path would unfold before her. She had no specific interest in social entrepreneurship, and hadn’t envisioned joining the field. When during that dinner party she was invited to a retreat on the topic, her curiosity was piqued.

Many members of the Young Women Social Entrepreneurs (YWSE) have similar backstories. They hail from all walks of life, often with no intention of becoming a social entrepreneur. More than 10,000 women share the experience of learning about YWSE through a friend.

It is proof positive of the sisterhood that powers the community.

At the time of the dinner party, Toni was an engineer working at a multinational corporation. She’d studied engineering and had a strong grip on technical skills and scientific processes, so her career trajectory seemed obvious. But as an alumna of her university’s Women in Engineering program, she also had a background in bridging the educational gaps plaguing young girls.

It didn’t take long for Toni to become involved in YWSE:

“When I signed up to go to the retreat, they requested volunteers for various tasks. I offered to do the layout and printouts for the program. I was amazed by the diversity of backgrounds and skills [of the other attendees]. …I was instantly drawn to this group of women with big hearts who’d turned toward improving themselves and the world.  Soon after the retreat, and still in its after-glow, I applied to be a Board Member… to be more involved and connected to the YWSE community.”

Like many other women, Toni was drawn to belonging to something supportive and innovative. A community of compassionate and driven women: that’s essence of YWSE, and its greatest asset.

YWSE is a values-based learning community with an aim to support the next generation of female change-makers. For the last fifteen years, they have been inspiring women all over the world, with chapters in Afghanistan, Ghana, Kenya, South Africa, and the USA. Professionals use the network to share expertise and support career advancement aligned with values of social responsibility.

Regardless of industry or background, YWSE members want women to succeed at being social movers, who create measurable impact in their communities. Being a Young Woman Social Entrepreneur is about progress in its many forms. While it doesn’t always mean being CEO of a triple bottom-line social enterprise, or a 22-year-old revolutionary—sometimes it does!

YWSE members are collaborative, passionate, and goal-driven, and realize the journey is just as important as the outcome. YWSE’s focus on social good, with a heavy emphasis on trust and accountability, guides its members towards building companies with ethical practices and corporate integrity, from the global to the local level. Most of these initiatives begin where Toni's did: at a YWSE meeting.

Meetings welcome women from all walks of life, and put them in a space where they are able to talk, share ideas, and find collaborators. In this space, they are seen as equals and creators above all. Experiencing that (often for the first time) is what brings many women back. Constructive spirit and opportunity gives many campaigns their first legs, and a firm ground with which to stand on them.

As of 2013, only 7% of funding in the non-profit sector went to organizations supporting women and girls. Today, female-run, early-stage, post-accelerator enterprises are 15% more likely to be profitable than male-run businesses— yet are 40% less likely to get funded.  It is an austere reality.

Organizations like YWSE, whose mission is to propel women to lead social innovation by providing tools, training, development resources, and networking opportunities, offer a robust alternative.

YWSE is about receiving the authentic, unconditional support from others, and meeting like-minded innovators who believe that mobilizing women lies at the center of tangible, global change.

“Because of YWSE I've made life-long friends who will always be there to support me…  They've seen me through a complete career shift, helped me develop my filmmaking skills and business, been my travel buddies… and they're always brimming with ideas.”

We need women like Toni to embrace the idea that they are capable of changing the world. It’s not as simple a concept for women globally as just saying so: action is paramount.

Inspiring women to be the change they need

Toni was at her third weekend retreat in 2010 when she experienced something special. A speaker at the retreat guided the attendees through a visualization exercise.

Toni had always been interested in film and cameras. At age 11, she first picked up a camera and fell in love with being able to narrate through it.

Aligned with YWSE’s values, the speaker was providing content that would help women listen deeply to themselves and envision their future. It was during this exercise in particular, that Toni realized she had to take the leap into filmmaking – or she would regret not trying.

She is now living in San Francisco, a filmmaker, who is passionate about telling stories that illuminate, inspire, and educate. One of Toni’s projects is documenting the work of Mighty Fingers Facing Change, a non-profit that, through art, seeks to create a global partnership among adolescent girls and the organizations that work to support them. Ultimately, they hope to strengthen communities across the board by bringing more female input to the table. Toni’s next filming location with Mighty Fingers is Uganda.

Looking back, Toni is amazed by the path that led her to her current life:

“Back at my first YWSE event in 2008, I had no idea I was going to be an entrepreneur.  I went to the retreat because I believed in YWSE's mission and wanted to be connected with like-minded women.  All of the great workshops, talks, and retreats I attended through the years were invaluable when I made the cross over to becoming an entrepreneur!”

This article is part of TheToolbox.org's #WomenInFront series, powered by Humanise. Learn more about the initiative at WomenInFront.net, or join the conversation on social media: Twitter, Facebook, and Instagram.
comments powered by Disqus