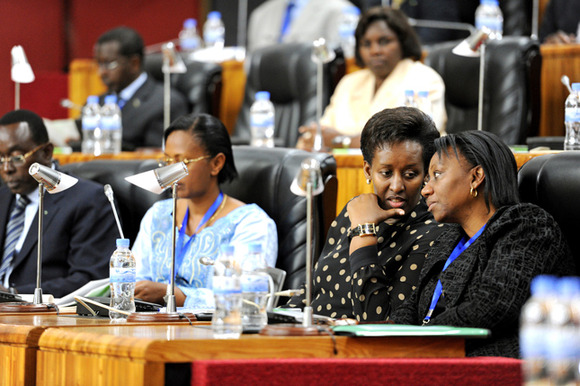 The Rwandan genocide of 1994 left the country staggering, without direction or leadership. The atrocity decimated a bulk of the male population targeting men and murdering them either for “ethnic infractions” or for being born as the wrong ethnicity. As a result, the killings and atrocities left behind a female majority to lay the foundation for the nation’s rebirth and rebuilding. At genocide’s end, 70% of the population was female, and women became de facto community leaders, financial providers, and heads of households.

It was thought that the gendered constructs of the 1994 conflict, which saw the brutal assault, affliction, and murder of women upon ethnic lines and as an essential tool of war, necessitated a “gendered peace.” A study from the UN found that women in Rwanda are perceived to be “better” at forgiveness, reconciliation, and post-conflict peacebuilding. Whether or not that is the case, it is evident that despite the targeting of women during the conflict and ensuing chaos, women have been integral to the positive reshaping of the country in the last twenty-three years, and vital to the reconciliation efforts that have been carried out across the country.

To that end, Rwanda now has more women with governmental roles than any other nation in the world. Women occupy 63% of seats in Rwandan Parliament, well above the stipulated 30% minimum representation, drafted into Rwanda’s 2003 Constitution. From their formative role in the “Gacaca” (pronounced gah-cha-cha) court appeals process to address genocide crimes to the recent improvement measures they have enacted both in government and through local social initiatives, Rwandan women have occupied pivotal roles every step of the way.

The Impact Women Have Had as Lawmakers So Far

Since the adoption of the 2003 Constitution, female Parliamentarians have been foundational in establishing not only the precedent that women’s and children’s rights deserve utmost attention but also in creating the formal and informal organizations needed to help facilitate these shifts. Along with their other duties, they have tackled Rwanda’s current perception of what womanhood is, and have promoted “women’s issues” as vital for a healthy society. One of the premier stages for change has been the Rwanda Women Parliamentarian Forum (RWPF).

This Forum functions as a consultative organization intended to facilitate gender issues in the Rwandan Parliament. This forum has worked most recently “to unite women parliamentarians from all political parties with four specific goals: institutional capacity building; speeding up the implementation of a gendered approach in the parliament’s mission and structure; promotion of gender-sensitive laws; and gender-based control of government action and budget.” In the context of legislation that this Forum has helped pass, there is still much more to be accomplished. Despite that caveat, recognizing that customary beliefs are hard-fought and difficult to change quickly, the laws have been significant in setting precedents for sustainable future change.

Three such laws of particular note, are the Law on Matrimonial Regimes, Donations, Successions and Liberalism; the Law on Rights and Protection of the Child against Violence; and Article 212 of the Civil Code.

The 1999 Law on Matrimonial Regimes, Donations, Successions, and Liberalism was historic in that it was the first time a legal framework stipulated property and inheritance rights between men and women in Rwanda. The Law gave women a stronger legal voice, and the right to inherit the land. For many in Rwanda, land ownership signifies entitlement; entitlement signifies progress. For women, entitlement and progress signify profound empowerment. Upon entering marriage, both spouses have the option to choose how land and property is assigned and divided, whether as a community of property (meaning shared entitlement), a separation of property between both parties, or a limited community of assets.

The 2001 Law on Rights and Protection of the Child against Violence defines a child as “anyone under the age of 18”, and lays out both the rights and responsibilities of children. It criminalizes murder, rape, the use of children for “dehumanizing acts,” as well as their exploitation, neglect, abandonment, and any such instances of forced or premature marriage. The impact of this law again iterates how greater female involvement in the political realm has helped cultivate support for humanitarian issues that was not previously present within Rwandan law.

Lastly, within the updated Civil Code, women have gained greater legal and financial rights within the country. Women can now open bank accounts, appear in court cases concerning the matrimonial property rights (mentioned earlier), witness a legal act, legally and rightfully divorce their spouse, or use their own given last name in any administrative act in which they are involved. While numerous, these rights are foundational for women, given that under colonial Civil Code women had no legal status and no legal rights beyond what was permitted by her husband.

Given the wide-reaching provisions that Rwanda has observed within the last two decades, change in the political and economic landscape has been monumental, yet given these shifts much remains for genuine equality to be fully realized throughout the nation.

Where There is Still Room to Grow

A 2004 study from the Ministry for the Promotion of Family and Gender (MIGEPROF) found that gender-based violence (GBV) is prevalent in the relationships of 54% of the women interviewed in the country. A Law for the Prevention, Protection, and Punishment of GBV was passed in 2008 by Parliament, but implementation and accountability remain an issue outside of urban areas, where policing is difficult and legal literacy is limited.

In 2006, 60% of Rwandan women were informally married and, as such, unqualified to claim the land of their husbands. Further, some rural areas were still practicing polygamy, but because the constitution only recognizes legal monogamous marriages, spouses in such relationships were not entitled to the full degree of the law. These are just some of the examples that have been roadblocks to more widely implementing improved women's rights.

The fact that GBV and other practices, such as polygamy, are still so widespread in Rwanda indicates that Parliament must find more effective ways of implementing new laws and for holding its citizens accountable. A country assessment by the African Development Bank noted that there is a strong need to “strengthen mechanisms for accountability of gender promotion in government; gender-based policies both through the Constitution and geographically remote areas; expanding initiatives towards greater equality beyond mere inclusion in government: developmental targets.”

Despite these shortcomings, there are positive implications for the future role of women in Rwandan governance. Rwanda provides a strong example of initiative, from which western leadership could benefit greatly by taking note and following suit. It must be remembered that only two decades have passed since Rwanda arose from the ashes of atrocity. Yet, in that brief timeframe, the small nation has surprised many in the global community by its achievements in economic development, and also in female political participation. Elizabeth Powley notes that the involvement of women is meaningful to this positive change, but that anyone’s ability to create change “can only happen when [it is] adjacent and consistent with the executive leadership of the country.” Thus, Rwanda has not only empowered its women politically but it has seen them into the formal economy taking part in the national progress which they helped to initially stimulate.

Social Promotion and Initiatives as an Ancillary Effect

As an extension of the RWPF and other new legalities, female Parliamentarians have advocated for developmental of further organizations and networks to help mitigate the persisting legislative limitations. As a direct result of the visibility of women’s leadership in Rwanda, these efforts have been supported by the Ministry for Family, Promotion, and Gender, and new advocacy groups have developed to help to bridge some of the gaps in the fledgling system.

Some noteworthy examples of these initiatives are Pro-Femmes Twese Hamwe (pronounced tuh-way-say-ha-muh-way) and The Rwanda Women Network. These organization work to collaborate with the government and other national, regional, and international organizations. Pro-Femmes is an umbrella organization comprised of 50 other associations that have a significant role in organizing women and facilitating support to victims of the genocide. The Rwanda Women Network is an organization that works to uplift the socioeconomic status of women in the country since 1997. These are, but two of many like-minded organizations founded to help combat barriers to gender equality in Rwanda.

Making a case for greater involvement of women legislators and lawmakers is a strong one when looking at the case of Rwanda over the last twenty years. Women have been essential to the process of recovery for the nation. They have been effective in advocating for the rights of women and children, in addition to constructing legislation to fight overall domestic abuse. Women Parliamentarians occupy the majority of seats in Rwanda’s parliament, and while naysayers may argue that much of the focus on this trend is in correlation to Rwanda’s position as an aid darling for the West, it is necessary to remember that the issue of women’s rights is not isolated to this East African nation. Even here in the U.S. similar issues of equal pay and gender inequality within the home and workplace abound. So, while some may deride Rwanda’s efforts and the potential lack of decision-making ability for women in government, it is noteworthy that the strides that Rwandan women have made serve as a positive example for the rest of the world.