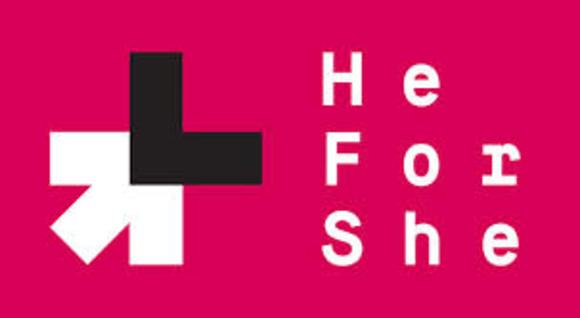 When Elizabeth Nyamayaro, senior advisor to the Executive Director of UN Women, gave her powerful speech at the London School of Economics on October 7th for the #GetFree tour, standing beside her was a dynamic cast of men. A university college director, a silver-screen actor, and a Barclay's Plc. representative. They were not there as bodyguards and "white knights", nor as buffers and bullies: the roles that men often get pigeonholed into during conversations on gender equality. They stood beside her as equals. Because when she said: "You can't create change without half the people sitting at the table," she wasn't just talking about women-- she was talking about men.

She was talking about men again, when she introduced me to her colleague, Antonie de Jong, the Director for Resource Mobilizationfor UN Women. In gender advocacy, one of the most insidious notions is that equality is a matter of 'us versus them' (women versus men), or the have-nots taking from the haves. It's why, Antonie says, people once pitied him his role in UN Women's predecessor group, UNIFEM.

It's also, as he puts it plainly, "Nonsense. The idea of men giving away anything [to achieve equality] is essentially nonsense. We have to highlight that men really become richer through gender equality, and that reward for men really needs to be the storyline."

It's a refreshing point of view. Elizabeth gave the campaign its name, HeForShe, after careful consideration, to represent not only a solidarity of thought, but solidarity of benefit.

Antonie describes the first time he saw a group of men ("typical macho, Harley motorcycle guys", he notes) become vocal gender equality advocates, organically. It was during a cross-country motorbike journey through Africa (“Ride on Speak out”)sponsored by private sector companies such as Harley Davidson Johannesburg and others as well as the UN, in which men from all walks of life (including self-confessed former abusers of women) visited women's shelters and spoke with advocacy groups. There was no agenda, beyond besting the rugged terrain of nine countries, while starting a conversation between men and women-- it was the men who suddenly started to think and act differently.

"I had never met these kinds of men before, who challenged their own emotional and psychological problems, and then came home changed themselves and others. They became less miserable because they had better, happier contact with women. I had an epiphany that male potential is the missing piece of the puzzle."

Antonie had discovered something unique. In much of activism, there is a societal problem and a hypothetical solution, and groups set out to give that solution a try. What Antonie saw, however, was that a solution could already be enacted, and this was positive proof that men could change their minds and have a personal, palpable gain through a more equal society. It was a working formula. The men he rode with began the journey for reasons of "fun, camaraderie... the cause was secondary". But soon, that motivation changed, and these same men were drawing up conclusions on how to take action against gender-based discrimination, while helping to initiate their resolutions on-the-ground. Momentum like this is responsible for social good initiatives such as The Good Husband Project in Zambia, which protects children from neglect and wives from battery.

Though he'd struck on a potent resource for change, there remain many obstacles in the way of that change—including educating men on what it is they gain in a movement around whichthey've typically felt uncomfortable with.

The first step is simply educating. Emma Watson set the words 'HeForShe' ablaze with meaning her UN Speech, putting the phrase and its ideology out there to the tune of over 50,000 Retweets. The next step after education is action.

HeForShe acts as a bridge: to connect men and women with not only the idea of gender equality, but the tools to achieve it. Antonie noted, "To put it bluntly, gender equality has not been achieved in any country... the root problem is patriarchy, and the fact that men have not cared about this issue. So HeForShe is an incredibly easy formula for men to show they care."

The challenge, of course, is to connect caring with action that can manifest itself inside of families, workplaces, and social clubs. HeForShe has breached this by setting an seven-rule action kit, which can be broadly understood across countries and cultures. As there has been at least one HeForShe pledge in every single country of the world, it is vital that the initiative be broadly comprehensible.

Of course, HeForShe has run into road blocks over this, too, with criticism that it's too exclusionary, down to its name.

"Maybe it's not the most perfect title, but it communicates the essence. The He has to be involved and invest in solving the problems of the She, and no longer being a part of the problem."

But that still doesn't quite answer the over-arching question: what does gender equality really do for men?

"If you say sex-disaggregated data, patriarchy, these complex words, you lose the interest of men quickly. Gender equality isn't doing women a favor by being altruistic. It's creating happier families, better bottom lines for companies, better societies from a political equality standpoint"

In countries where women are better represented in politics, the rights of the child are often better looked after too-- this, of course, includes boys. However, there are a plethora of straw-man arguments that come with being a male in a gender advocacy field. Despite all robust arguments that speak to what men can gain from equality, there are still those who will boil men in the field down to a single goal:  'you're just doing it to impress women.'

"It's nonsense. Talk to a man who has seen a mother abused... [or] when you're a father, and you have daughters, then these problems are suddenly very real and close to home," says Antonie.

A major issue in getting this message across is funding. HeForShe has thousands of signatures and is a global name, with over a dozen Impact Leaders, and the signatures of big-wigs from the Secretary General of NATO, to the head of the UN, to Parliamentarians and Heads of State: all who have made promises and pledges. Actual results have been slow to follow.

Antonie says, "People think you can create gender equality by talking about it. No. You need funding."

This basic funding could help with reaching some of HeForShe's less popular regions in the world, where the message is stifled by a lack of infrastructure: places stricken by poverty, lacking the wifi, computers, and mobile phones needed to connect with this social-media powered movement. Radio is something HeForShe is looking into, as it's a "must" for getting the message broadly outsourced and to develop grassroots outreach beyond the women's groups that it already creates and supports. The HeForShe Action Kit is already translated into seven languages, but they would also like to expand the translation to make it more accessible.

On the other hand, HeForShe has had a lot of help by the recent investment of worldwide news in issues of gender. It's bringing the conversation to the table in a big way that the movement is able to capitalize on.

"We're seeing a surge of information available on gender equality, from misbehaving sports stars, to the [kidnapped] school girls, what the Taliban has done [with women's education]... so men who usually consider gender equality a 'soft' issue are starting to pay attention." As a result, Antonie tells me that bands from Dubai to the USA have been making CDs with HeForShe-inspired songs, and support has come from even less likely places, such as the Valencia football club in Spain (where violence against women is a major issue), who proudly wear UN Women jerseys with a HeForShe message. Half of their ticket-buying fanbase, after all, is female.

"When I joined UNIFEM eight years ago, people felt sorry for me," shares Antonie. "They thought my career had gone awry... [people] were making fun of it, disdainful, even. Now, people are almost jealous. 'How did you get involved in this?' ...It's not more acceptable for guys, they're attracted to it."

It's further positive proof that momentous changes can be and are being made by men in this field.

When asked to sum up why men should be attracted to gender equality, Antonie had a good laugh, and brought up Iceland-- the world's most gender equal country.

"My colleague said, Iceland has three exports: Fish, Geothermal Energy, and Gender Energy," he said. "That's the energy you unleash on a society when men and women become truly equal. You can translate that into families, relationships... it's just on a different scale. That's enlightened self-interest for men, what they gain when they get involved with this struggle."